This is an attempt to make an unsupervised text generator with some specific style and form characteristics of text. Originaly it was published as an entry for NaNoGenMo 2019 (National Novel Generation Month contest).

The general idea behind the Paranoid Transformer project is to build a paranoiac-critical system based on two neural networks. The first network (Paranoiac-intrusive Generator) is a GPT-based tuned conditional language model and the second one (Critic subsystem) uses a BERT-based classifier that works as a filtering subsystem, so it selects the best ones from the flow of text passages. Finally, I used an existing handwriting synthesis neural network implementation to generate a nervous handwritten diary where a degree of shakiness depends on the sentiment strength of a given sentence.

The first network, Paranoiac-intrusive subsystem AKA Generator, uses an OpenAI GPT architecture and the implementation from huggingface. I took a publicly available network model already pre-trained on a huge fiction BooksCorpus dataset with approx ~10K books and ~1B words.

Next, I finetuned it on several additional handcrafted text corpora (altogether ~50Mb of text):

During the fine-tuning phase, I used special labels for conditional training of the model:

At last, in generation mode, I kindly asked the model to generate only QUOTE+CYBER texts. The raw results were already promising enough:

terosexuality is pleasures a turn off ; and to me not to be a true blossoming beautiful being is on the other side. the wind is our song, the emotions are our wind and a piano, new things change, new smells kick off in time, a spiritually shifting dust. let your eyes sing music for a while. let your ears measure the bass beat of your soul, the gentle winding of the song. then your ears achieve harmony. you can listen to french playstation on live music together forever, in the philly coffeehouse, in them congressional district of the franklin gap building. let painting melt away every other shred of reason and pain, just lew the paint to move thoughts away from blizzes in death. let it dry out, and turn to cosmic delights, to laugh on the big charms and saxophones and fudatron steames of the sales titanium. we are god's friends, the golden hands on the shoulders of our fears. do you knock my cleaning table over? i snap awake at some dawn. the patrons researching the blues instructor's theories around me, then give me a glass of jim beam. boom! the business group soon concludes. caught one miracle? survive the tedious rituals you refuse to provide? whatever happens, i throw shit in your face. joy ries away? you could give acapindulgent half your life away, though i am nothing especially sexy. this sift, this being sveng? do impotent and desperate oozing drug as i shake and shine? you adored me. brains run out when people charitable that into you.

Now it was time to make some cleaning.

The next big thing to do was filter some really good ones from this endless flow of the text.

At first, I made a script with some simple heuristic filters such as:

The application of this script cut the initial text flow into a subsequence of valid chunks.

a slave has no more say in his language but he hasn't to speak out!

the doll has a variety of languages, so its feelings have to fill up some time of the day - to - day journals. the doll is used only when he remains private. and it is always effective.

a little of technique on can be helpful.

out of his passions remain in embarrassment and never wake.

At last, I trained the Critic subsystem. This neural network uses a BERT architecture implemented again by huggingface. Again I took a public available pre-trained network model and finetuned it on my labeled 1K chunks dataset to predict the label of any given chunk.

Here I used manual labeling of these chunks with two classes, GOOD/BAD. Most of the labeling was done by a friend of mine, Ivan @kr0niker Yamshchikov, and some I did myself. We marked a chunk as BAD in case it was grammatically incorrect or just too boring or too stupid. Overall, I used approx 1K of labeled chunks, balanced (one half of them were GOOD, the other half -- BAD).

Finally, I made a pipeline that includes the Generator subsystem, some heuristic filters, and the Critic subsystem. Here it is a short sample of the final results:

a sudden feeling of austin lemons, a gentle stab of disgust. i'm what i'm.

humans whirl in night and distance.

by the wonders of them.

we shall never suffer this. if the human race came along tomorrow, none of us would be as wise as they already would have been. there is a beginning and an end.

both of our grandparents and brothers are overdue. he either can not agree or he can look for someone to blame for his death.

he has reappeared from the world of revenge, revenge, separation, hatred. he has ceased all who have offended him.

he is the one who can remember that nothing remotely resembles the trip begun in retrospect. what's up?

and i don't want the truth. not for an hour.

The huge blob of generated text could be found here.

Here is a short description of scripts from this project:

As much as the resulting text basically reminded me of neurotic/paranoid notes I decided to use this effect and make it deeper:

I took an implementation by Sean Vasquez of the handwriting synthesis experiments from the paper Generating Sequences with Recurrent Neural Networks by Alex Graves and patched it a little. Specifically, I used a bias parameter to make the handwriting shakiness depended on the sentiment strength of a given sentence.

Take a look at the example:

I drew some covers and used the rsvg-convert library to build a PDF file from separate pages in SVG. 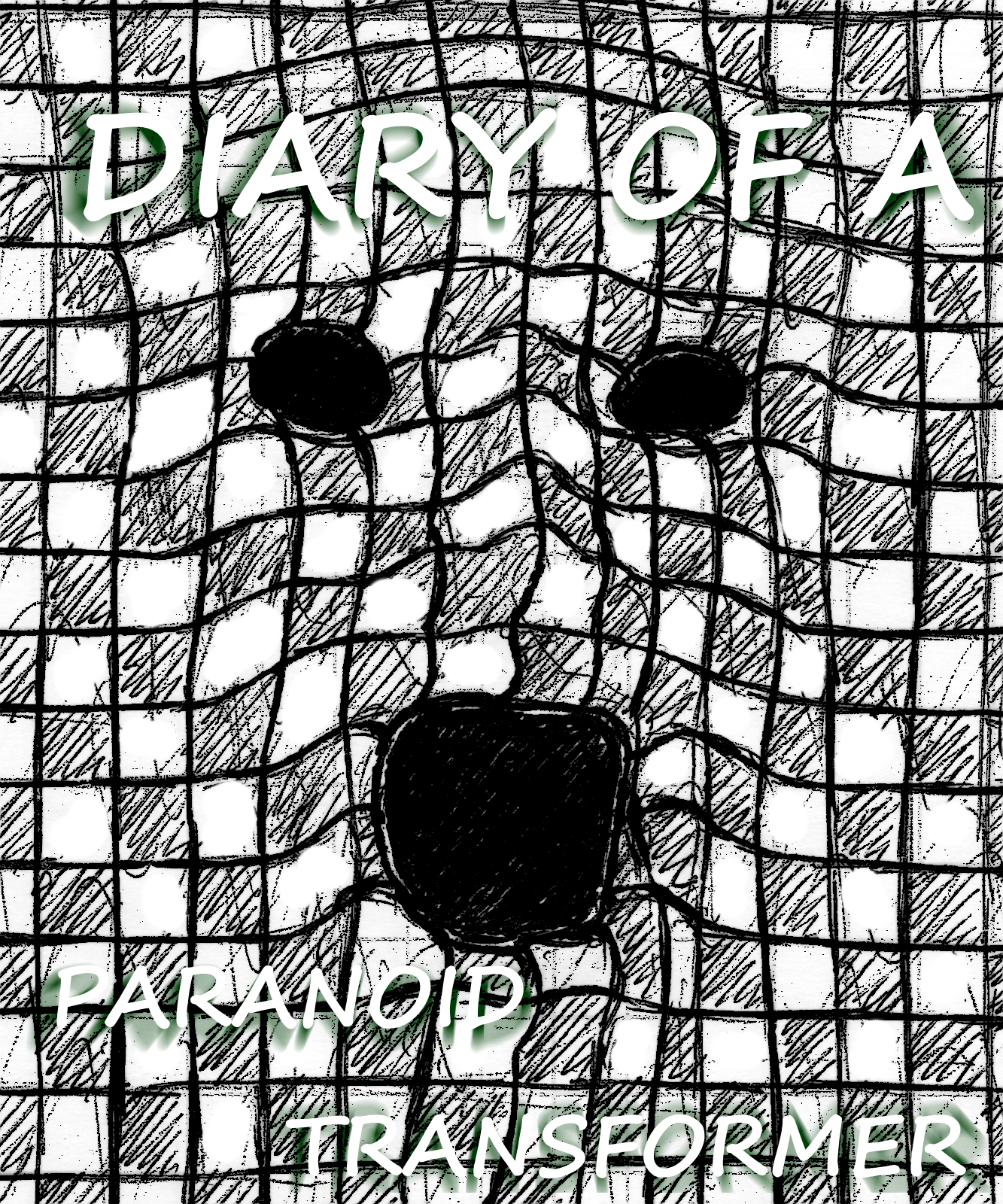 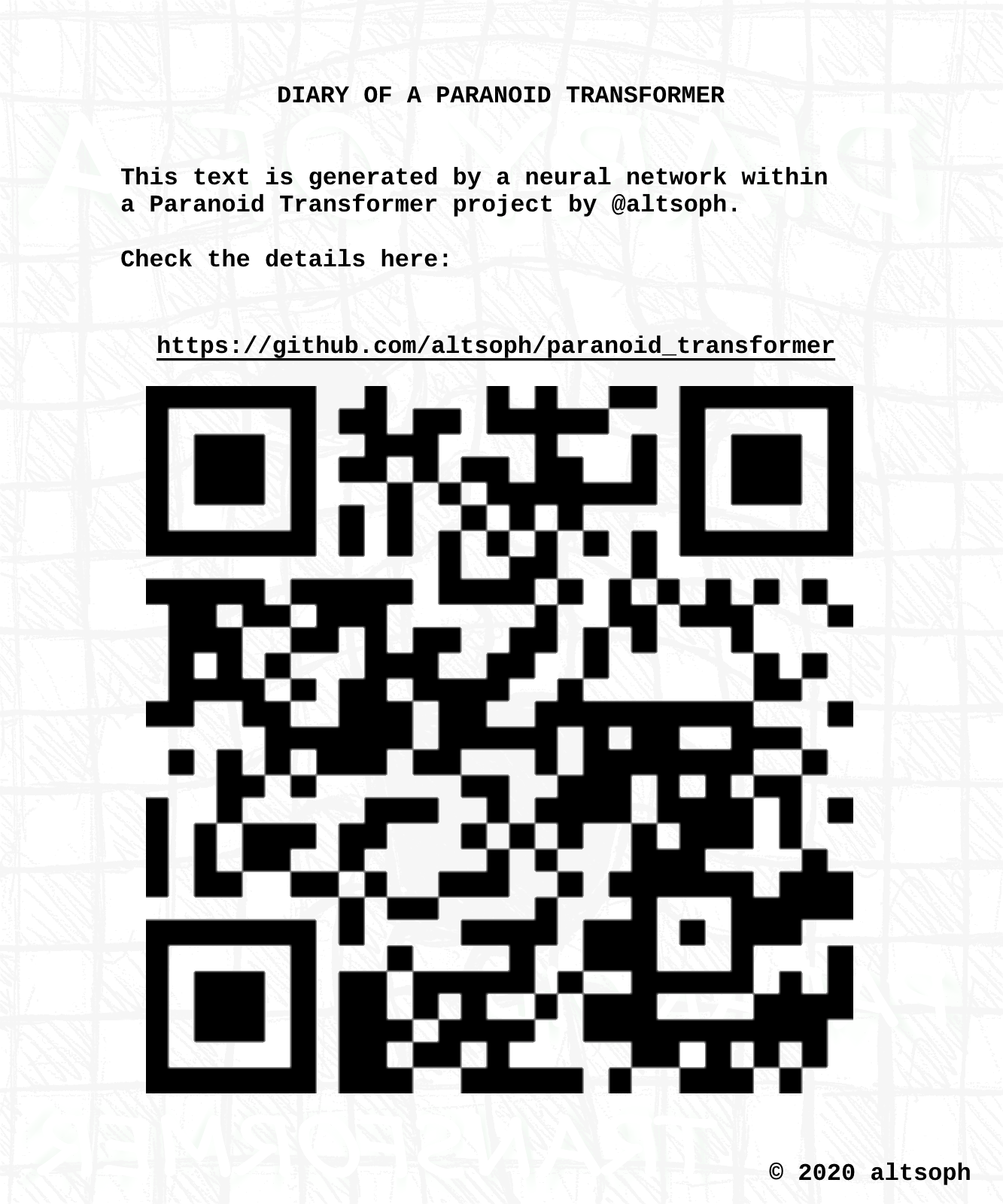