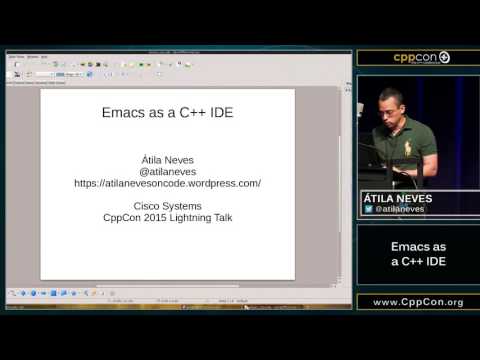 cmake-ide will set variables and call functions for the installed dependent packages.

It works by running CMake in Emacs in order to obtain the necessary compiler flags to pass to the other tools. Since all the dependencies are specified in the CMake scripts, there is no need to maintain a parallel dependency tracking system for Emacs. Just ask CMake.

cmake-ide can automatically create build directories for you -- either in the system's tmp-directory or under cmake-ide-build-pool-dir (if set). By default, all automatically created build directories (no matter where created) will have temporary and unique names, that will change with each new session and are thus not reusable. You can, however, by setting cmake-ide-build-pool-use-persistent-naming use a reproducible naming scheme that is based on the project's path and will not change as long as the project's path is the same. This way, you can reuse the build directory.

Install from MELPA or MELPA Stable with:

Add this to your .emacs / init.el:

If cmake-ide-flags-c or cmake-ide-flags-c++ are set, they will be added to ac-clang-flags and company-clang-arguments. These variables should be set. Particularly, they should contain the system include paths (e.g. '("-I/usr/include/c++/4.9.1" "..."). For a system with gcc, you can get this information by running gcc -v -xc++ /dev/null -fsyntax-only (it's the same prerequisite for auto-complete-clang to work, since that's how clang itself works).

And... that's it. It works by calling cmake and parsing the resulting JSON file with compiler flags. Set cmake-ide-build-dir to where your project is being built and you won't have to call CMake manually again (except for the first time to specify options). Best done with directory local variables.