Emulation for Miniguru and Tex Yoda keyboards on X11.

Quick Installation Guide (for the impatient)

Done! Now your poorman's $10 keyboard behaves like this beauty... 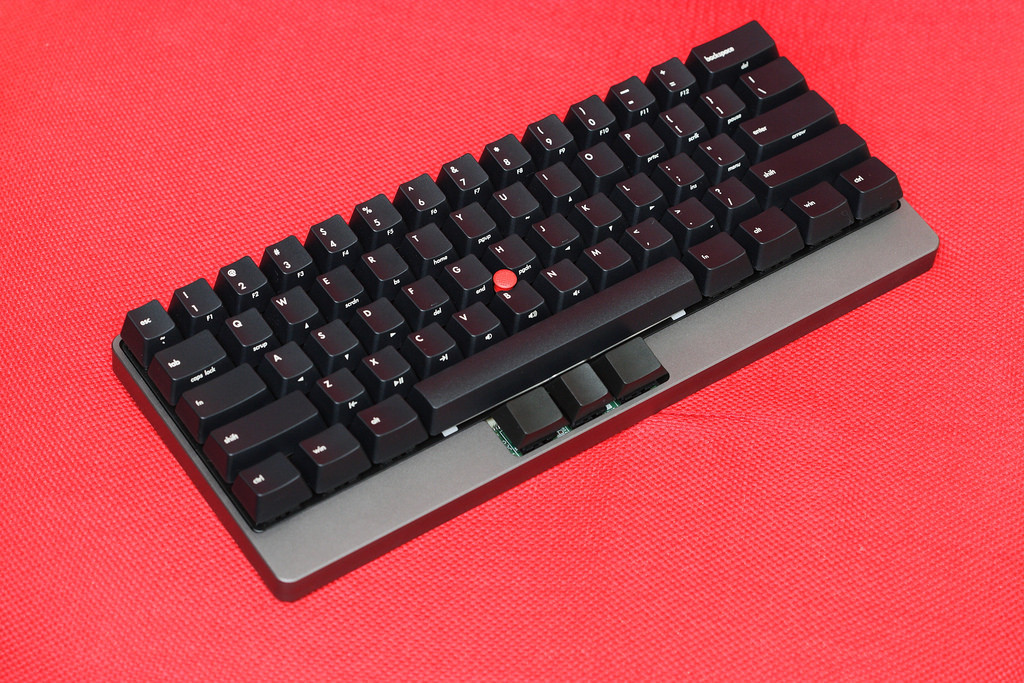 Note: You can also type carpalx_ and press TAB in order to see other commands available.

In case the installation script does not work for you, please consider adding support for the distribution of your operating system to carpalx/install.sh and please send us a push request.

This project provides emulators for mechanical keyboards MINIGURU and TEX Yoda. Well, an emulator for layouts these keyboards adopt, at least. The idea is that you can use your poorman's rubber dome keyboard more or less in a way you would use professional keyboards like these ones mentioned.

There's also a layout I designed (heavily based on MINIGURU) which I call HYENA, which is intended for heavy emacs users... and their poor suffering pinkies. The idea is that pinkies are relieved as much as possible and both hands can perform similar tasks, so programmers can find their own way of doing tasks without limitations of doing certain things only with one hand or another.

In case you are interested on typing faster and stressing less your hands, this project offers alternate keyboards layouts borrowed from CarpalX Research in addition to a number of popular layouts like Dvorak, Colemak, among others. You can also swap control keys, so that you can reduce stress on your pinkies, in particular if you use emacs a lot.

The main driver for this project was the fact that these beautiful keyboards are not available for the average end user. The MINIGURU was first built in 2009 but was never released into production whilst the TEX Yoda was produced only in limited quantities via Massdrop, only to those who were able to catch the group open on time. If you are not going to build a keyboard yourself, a possible solution is implementing the keybindins by software, as this project does.

If you are really enthusiastic about a keyboard with a Trackpoint, one possible solution is buying an Unicomp EnduraPro and use the software provided by this project with it. The effect will be more or less the same, if you ignore the fact that an Unicomp EnduraPro is a monster compared with these small keyboards.

This software was tested on Ubuntu 12.04, Debian Wheezy and Debian Jessie. Chances are that this software works just fine in other versions of Debian and Ubuntu, as well as other derivatives of Debian.

File bash_xkb.sh defines a number of handy functions. For example, function carpalx_tex_us is defined like this:

It means that we are composing several layouts into one:

You can call these functions from command line. Or you can simply type carpalx_ followed by a TAB key and see all available functions, as shown on the top of this documentation.

Keyboard layouts like Tex Yoda define arrows in locations convenient for users of text editors like emacs and vi.

In addition to that, and in particular of emacs users, your left hand may become stressed of pushing Ctrl so many times. In particular, the left pinky suffers a lot due to such reason.

In order to alliviate this condition, it's possibly a good idea to swap LCtrl with LAlt. This way, you can press LCtrl more or less easily with your thumb instead, which is your strongest finger. Also, since CapsLock maps to Fn key, and since you will use your left pinky to press CapsLock, it is possibly a good idea to define an alternate Fn key. For this reason, we also define Menu as and additional Fn key.

In addition, layout HYENA was designed specially focusing emacs users. It's based on MINIGURU_, which is already excellent, but also provides Emacs users additional flexibility given that the vast majority of functions are available on both sides of the layout.

CarpalX Research studies how easy or how hard different keyboard layouts are for typists, according to their language of preference.

There are layouts which impose less effort to typists. Among them, some are considered popular, like Colemak and Dvorak. But you can define any layout arbitrarily. Or you can define scientifically, aiming optimize the speed people is able to obtain. Among some of these optimized layouts, it's worth mentoning QGMLWY layout from CarpalX Research.

If you are really brave to learn a new layout, you can give a go with QGMLWY. Just remember that, after running the command alias which activates an alternate keyboard layout, the change is applied immediatelly. So, you will get lost initially because you will not be able to type anything if you are not acquainted with QGMLWY.

If you are about to play with a layout you are not acquainted with, please remember to print the layout before using it. Visit this page for reference: http://mkweb.bcgsc.ca/carpalx/?full_optimization

Why this stuff was created

I simply got fed up of first waiting years for MINIGURU_ and then waiting again for TEX Yoda to become available in Massdrop. Then I bought an Unicomp EnduraPro, which has a trackpoint and mouse buttons, and I've created this project which makes the operating system responsible for doing the job, not the keyboard.

This is true that EnduraPro is a monster on your desk, but it will reach your door step in about one week or two after you place the order. Simply connect onto your computer and it is ready and it works. No soldering skills or electronics skills needed.

Emulation for Miniguru and Tex Yoda keyboards on X11.