Update 8 September 2016: Current version of libPQP is deprecated due to a newly published attack. Possible mitigations:

This is a simplistic prototype of a post-quantum cryptography library in Python. PQP stands for Post-Quantum PGP. The library is not production ready and should not be used in a real-life context, but works fine for testing purposes. The plan is, once the code has been audited, to translate it to Javascript and create a webapp.

In this prototype, the focus has mainly been on making the QC-MDPC part efficient and not the actual protocol. Hence, you may find vulnerabilities in the current implementation of the protocol. Also, the primitives used in the code are not the ones mentioned below. This prototype uses:

The final product will use Salsa-20 as symmetric-cipher primitive and Poly1305 for authentication purposes. Moreover, PBKDF2 or similar will be used for symmetric-key generation.

Speed-ups in the decoding use the fast fourier transform (FFT) to achieve O(n log n) complexity in modular polynomial multiplications, instead of O(n²). Because the FFT implementation in Numpy is restricted to certain lengths (multiples of powers of 2), we use pyfftw which is a wrapper for FFTW3. FFTW3 implements Winograd's FFT algoritm and supports prime-length blocks. See below for known vulnerabilities.

Below are given the proposed parameters for rate R = 1/2.

Since the encrypted token is a codeword of length 9602 (for 80-bit security), we add approximately 1200 bytes of data to the ciphertext. Apart from this, a 32-byte MAC is included. This inflates a (padded) message of size M to size 1232 + M. For higher security levels, the inflation will be larger — but still constant. In the DER format, the inflation is about 35 %.

What is post-quantum cryptography?

Today, most security assertions depend on primitives based on number theory. In principle, all of these primitives stand and fall on the problem of factoring integers. In the 1980's, a theoretical model of a computer that exploits certain quantum mechanical effects to achieve better complexity in certain classes of problems (BQP) was proposed. It so happens that the problem of factoring integers is contained in this class. Such a computer, called a quantum computer, can factor any integer N in time polynomial to the number of bits in N. This poses an actual problem for the security industry because RSA, ECC and DH, to name a few, can be broken efficiently. In turn, such a break causes the whole security architecture, upon which the secure internet is built, to collapse. Even symmetric primitives, such as AES, are subject to quantum attacks. However, the impact is much less severe; the speed-up in attacks is only a square-root factor.

To remedy the problem of quantum attacks, post-quantum cryptography was proposed. There has been many candidates, often based on so-called NP-complete problems. One such candidate is McEliece public-key cryptosystem, which is based on a hard problem called random linear decoding. Most of the linear-decoding problems are hard, but we should point out that some linear codes with special properties are very easy to decode. McEliece PKC extends this idea by defining such an easily decodable linear code, which becomes the private key. Then, a scrambled (random-looking) version of the linear code is used as public key. This faces the holder of the private key with an easy problem, but the attacker faces a hard problem.

Suppose Bob wants to send Alice a message m. To encrypt, he does the following:

Note that these operations require basically no work at all, so encryption is very fast. Now Alice receives the ciphertext c.

The QC-MDPC McEliece is a bit different, but the principle is the same. Instead of using matrices, it operates on polynomials (or, equivalently, circular matrices). Here, the private key consists of two sparse polynomials H₀ and H₁, which can be used to perform efficient decoding. H₀ and H₁ form the private key. The public key is H₀ × inv(H₁), which is not sparse and (presumably) cannot be used for efficient decoding. Encryption and decryption is done is similar ways to the above.

In this section, we will briefly describe the protocol. Much like a Fujisaki-Okamoto transform, it contains both an asymmetric part and a symmetric one. Consider the following scenario. Assume that Bob wants to send Alice a message. Denote Alice's keypair (pubkey, privkey). Bob takes the following steps:

The ciphertext can now be distributed to Alice, using arbitrary means of communication. Below is a graphical interpretation of the above steps. 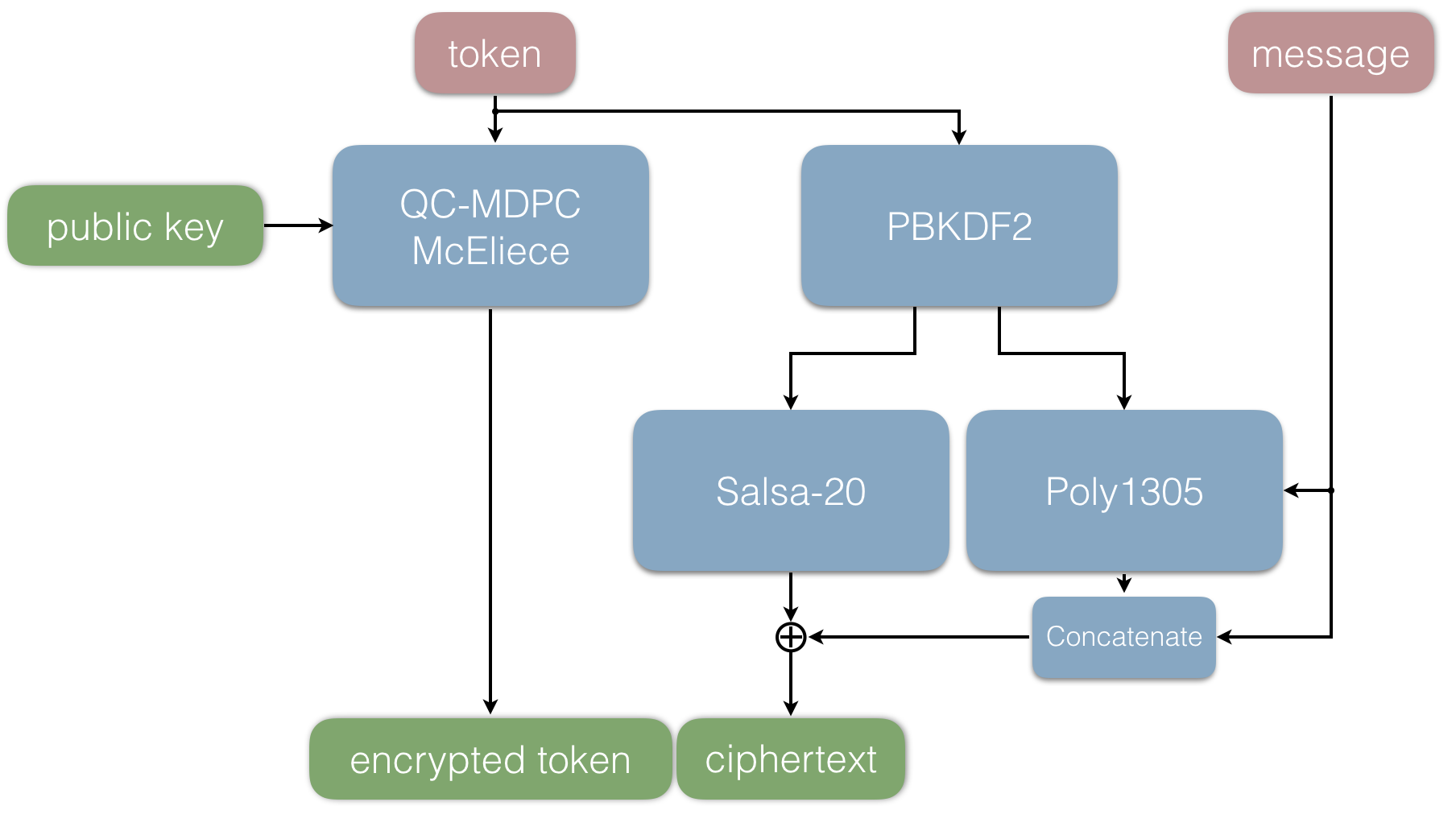 Now Alice wants to decrypt the message sent by Bob. She performs the following steps in order to do so:

This completes the outline of the protocol. Below is a graphical interpretation of the above steps. 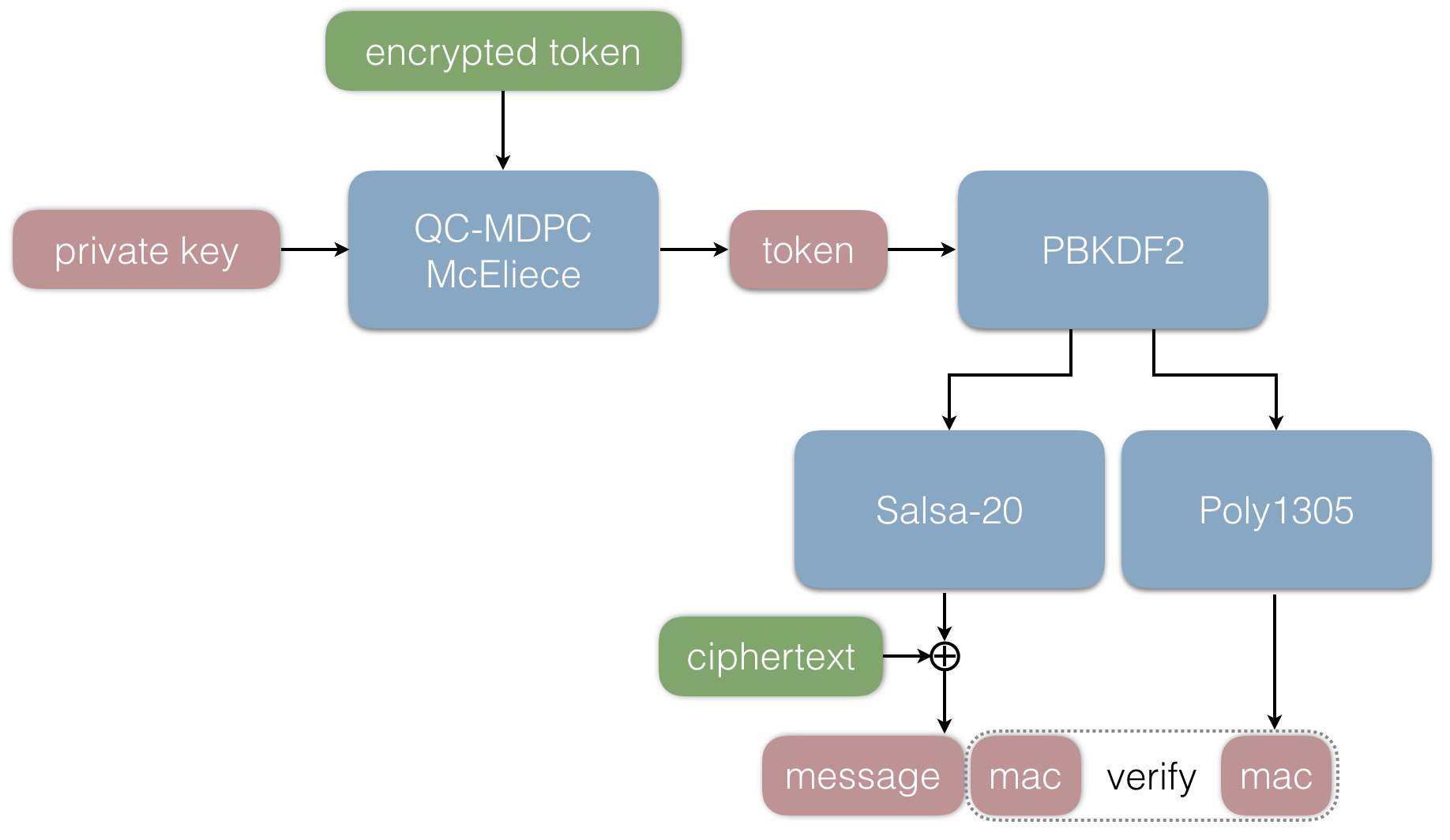 The keys are encoded in Base64 and ASN.1, just like the normal ascii-armored keys used in public-key cryptography. The public-key structures contains only the generator polynomial G.

A typical (encoded) public key has the following appearance:

The private key contains the two secret-key polynomials H₀ and H₁. Because inversion takes quite a while to perform, the inverse of H₁ is also contained in the private-key structure. This is not necessary, since inv(H₁) is only used when deriving the public key.

Below is a typical private key given. As we can see, the elements H₀ and H₁ are very sparse. These polynomials could be encoded more efficiently, but we don't care too much about private-key size and is therefore left as is.

The messages are structured in a similar way. The encrypted token (C₀, C₁) is stored in two separate Bitstrings and the symmetric ciphertext are stored as an OctetString.

We encrypted the message

and put it into the ASN.1 format. Below is the ciphertext. 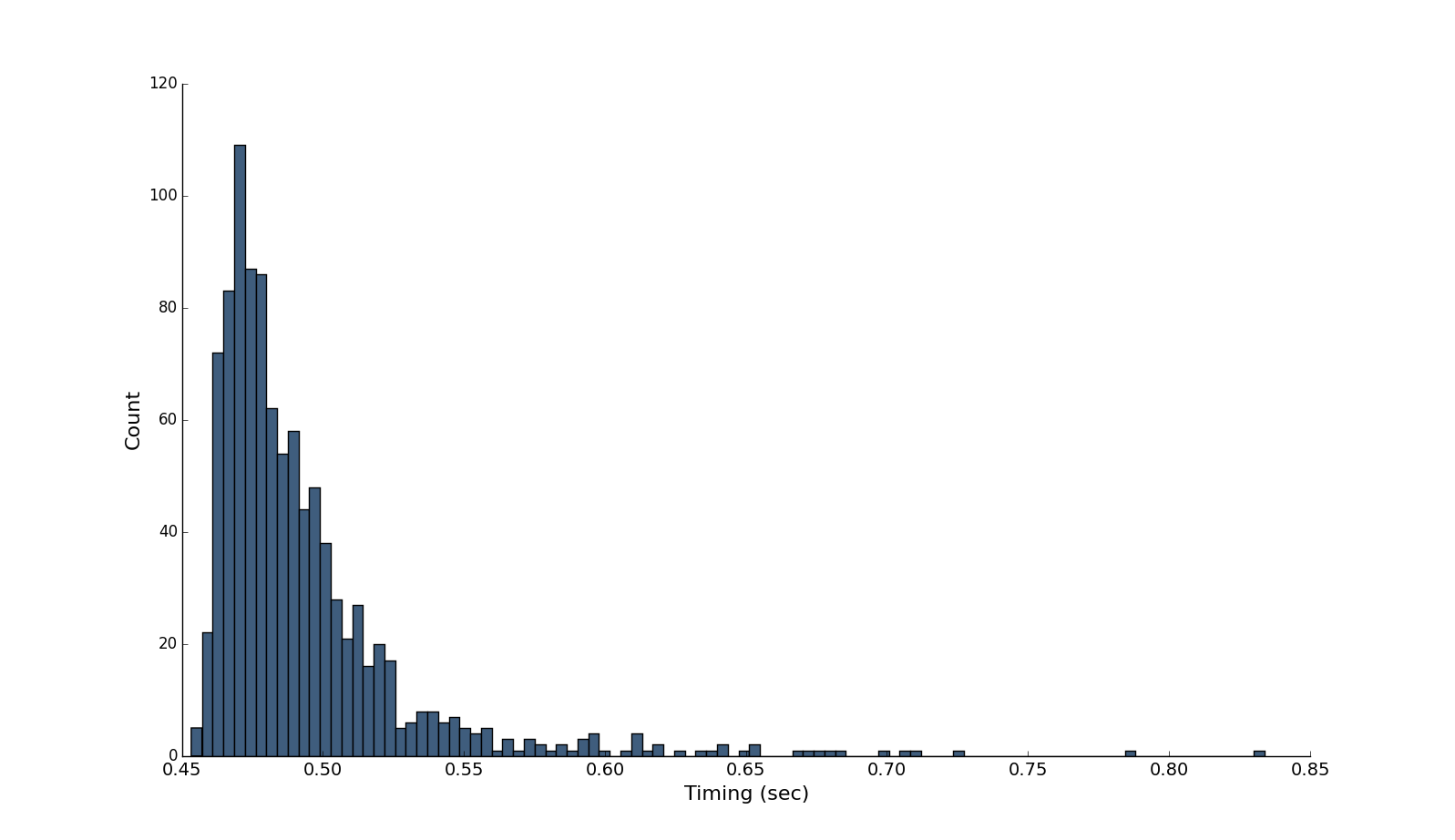 Here is the output of encrypting and decrypting a 190 mb video file:

#Command-line tool The library can be invoked by a supplied CLI tool (the pqp file). Padding is not included, so some kind of PKCS padding will be added.

To generate a keypair, run the following command:

This creates two files in the same folder containing the two keys.

To encrypt a file, call pqp as follows:

This writes an ASN.1 encoded ciphertext to stdout. Appending --output writes to file:

To decrypt, invoke the following command. To write to file, use the above methodology.

Below are the required steps to make libPQP run on Linux (tested on Ubuntu 16.04 Xenial):

##Decryption oracle The protocol can be designed using normal McEliece or Niederreiter. In case of McEliece, the error vector should be part of the authentication (for instance, generate MAC using a concatenation of message and error vector). Such a measure will mitigate the usual decryption oracle attack, described below.

Obviously, there is an implicit assumption that the receiver will either reject any error larger than T or the decoder will fail (which rarely is the case).

If the protocol instead is designed using the Niederreiter model, the error vector will be/encode the token. In this case, there is no need to authenticate the error vector. Since any flipped bit in the ciphertext will cause the receiver to decode a different token, it will break the decryption oracle.

This is a slight variation of the above. Instead of observing decryption errors, we measure the timing. There has been some effort in making decoding run in constant time. See this paper.

The decoding we use is probabilistic and susceptible to timing attacks. Below is an image with the timing attack implemented running 15 decryptions for each bit flipped. However, in the PGP-like setting we do not worry too much about this.

The simplest imaginable distinguisher will detect a constant-error encryption with probability 1.

The theory is described in more detail here. There is an easy counter-measure; we can thwart this attack completely by picking the error weight odd with probability 1/2:

This attack is contained in distinguisher.py.

Squaring attacks exploit that (the now deprecated) p = 4800 = 2⁶ × 75. By squaring the polynomial, the vector space decreases in size by a factor 2 (which can be done six times). It may also lead to collisions in the error vector, causing a decrease in error weight. This allows an attacker to go quite far below 80-bit security. See this paper.

This attack can be mitigated by picking a prime block length p. In the example above, p = 4801.

#Acknowledgements Miroslav Kratochvil (creator of codecrypt) for pointing out a weakness in the protocol.