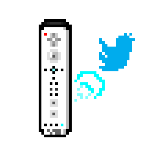 a wiimote to twitter thingy. by Wesley Hill (@hakobyte)

twiimote is a small toy program that 'connects your wiimote to twitter'. it's as simple as that.

Real reason: I wrote this application just for fun because I was bored due to A Level revision/exams :/ 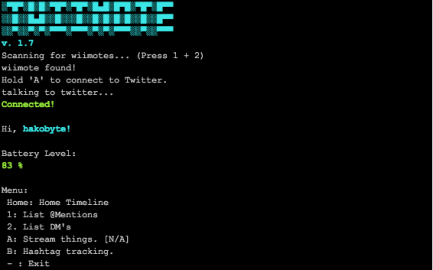 You're gonna need some stuff in order to get twiimote up and running:

keep in mind twiimote only works on GNU/Linux.

not mac or windows.

open a terminal and launch:


When inside twiimote press these buttons to navigate.

or fork this repo and contribute! :D

twython by @ryanmcgrath - for the awesome twitter api wrapper in python.

Nintendo - for the wiimote duh.

munchi says thanks, for using this software, knowing that you will do good with it.