In an event-driven microservices architecture, the concept of a domain event is central to the behavior of each service. Popular practices such as CQRS (Command Query Responsibility Segregation) in combination with Event Sourcing are becoming more common in applications as microservice architectures continue to rise in popularity.

This reference architecture and sample project demonstrates an end-to-end example of building event-driven microservices that use Spring Boot and Spring Cloud. The project aims to show what an ideal development process might look like for building microservices that handle both HTTP and AMQP protocols for exchanging messages.

Each microservice in this reference architecture breaks down into three different independently deployable components. 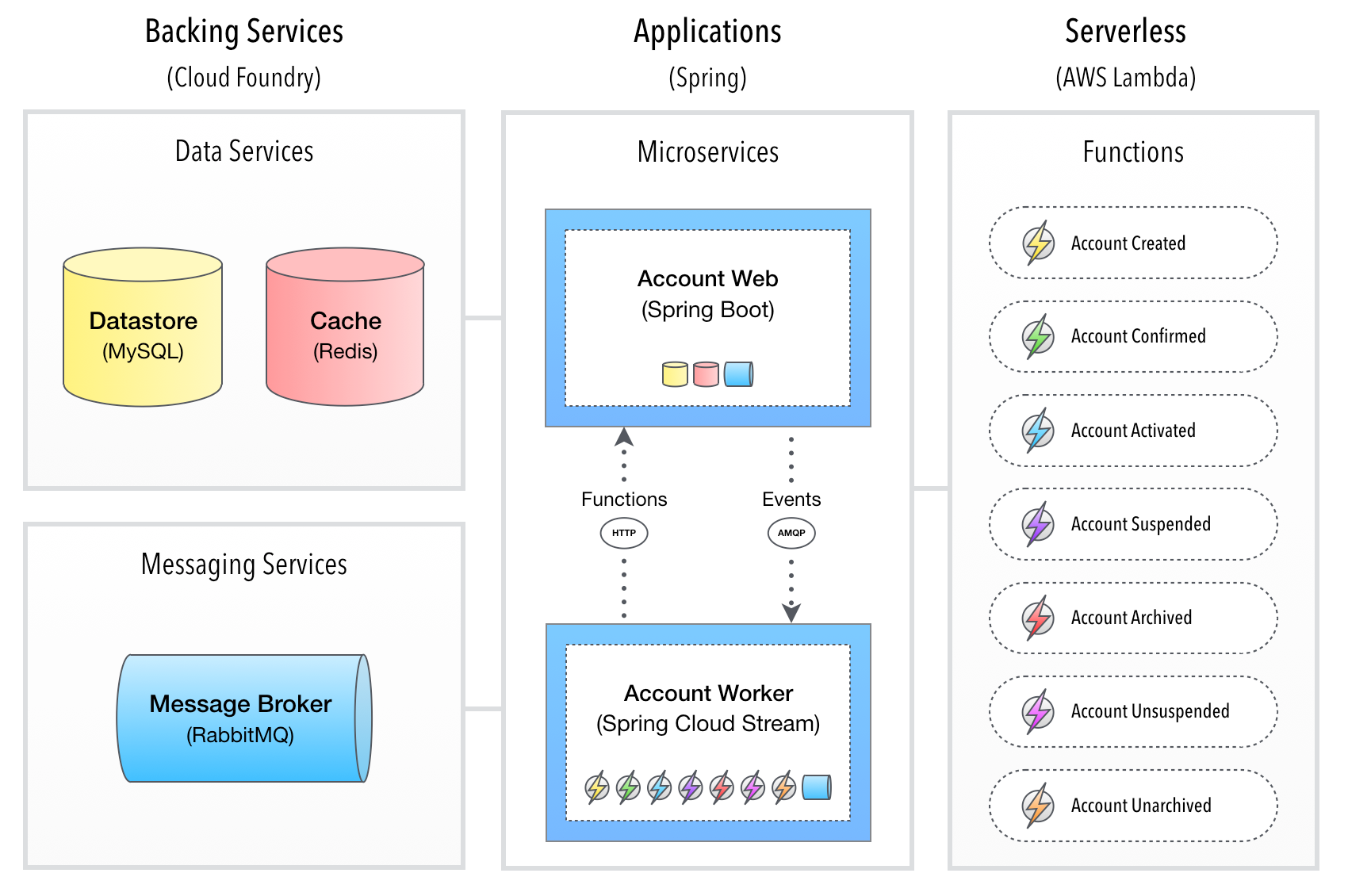 The diagram above details the system architecture of the bounded context for Accounts, which includes deployable units for each Backing Service, Microservice, and AWS Lambda Function.

The repository contains two parent projects. Each microservice team is responsible for two separate component modules. The first component is the HTTP-driven web service for managing domain entities through a hypermedia-based REST API. The second component is an AMQP-driven event processor that drives the state of domain aggregates.

The components break down into two separate concerns: Web and Worker roles.

The web role contains a REST API with transactions that requires strong consistency. Any workflow that can be transacted within the boundaries of the single microservice can be done within the scope of a single HTTP request/response.

The worker role contains an AMQP-based message processor that listens for events generated by the web role and from other microservices. The worker role will be responsible for managing workflows that are eventually consistent. Any transaction the requires complex durable communication between separate microservices will be handled in the worker role.

The deployment packaging for each microservice can vary depending on the desired size of the infrastructure footprint. You can either run both workloads as independently scalable components, or alternatively, you can package the components together into a single container.

The first style of packaging is to combine together the HTTP (web role) and AMQP (worker role) components into a single container. The advantages with this approach have to do with minimizing the infrastructure footprint for operating the microservice.

The second style of deployment is to independently package the web application separate from the worker application. This approach provides multiple advantages at the cost of a larger and more complex infrastructure footprint.

This repository is in an experimental state. To build and run the experimental project, run the following command:

Before starting Spring Cloud Data Flow, make sure you're running each one of the backing services, as stated above. Also, you will need to start the Eureka server.

From the root of the project:

The Spring Cloud Stream applications will be imported and the event streams will be available in the streams section of the data flow server. The load simulator stream module will begin to slowly pump events into the system and you'll be able to see the activity in the analytics section where you can see counters measuring the event load over time.

This project is working off of snapshots, so there may be issued running the data flow server. Please submit a issue or a pull request with a fix. (Thanks!)

Each bounded context in this reference architecture contains a set of action-mapped functions that can be deployed as Serverless functions. To learn more about how this works in practice, please take a look at the documentation for the account-worker application.

This project is an open source product licensed under GPLv3.