This repo contains only documentation concerning the component-model architecture. All actual code (and their corresponding documentation) is found on all the different repositories under the PoP organization account.

PoP describes an architecture based on a server-side component model. It has been implemented in PHP, but can also be considered a mental model for building applications in any language.

PoP is components all the way down. Each component is implemented partly in the back-end, and partly in the front-end. The component-based architecture provides the mechanism to build, configure and even deploy the application (eg: by providing support for the serverless paradigm). 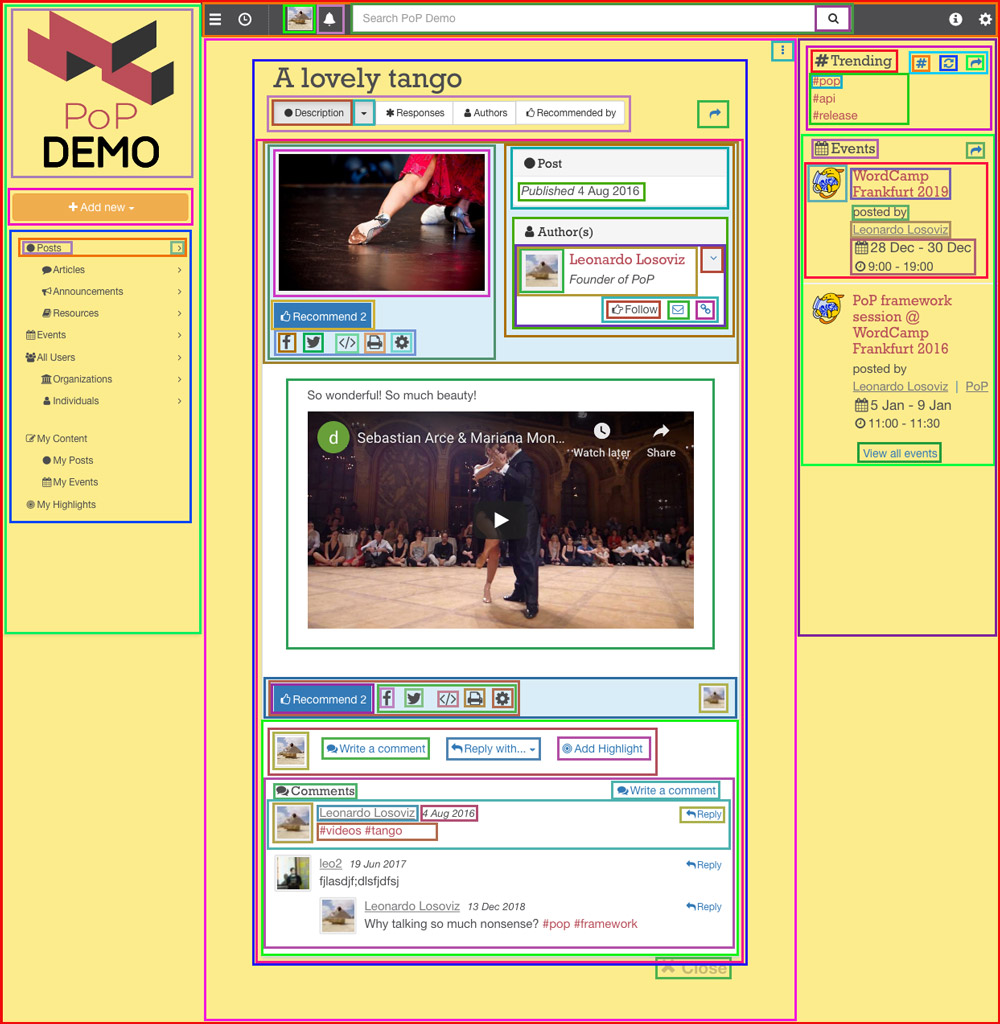 PoP relies on contracts to interact with the underlying CMS or framework, where all logic resides. As such, it is CMS-agnostic, and it can work with any PHP-based CMS or framework (WordPress, Symfony, Laravel, Joomla, Drupal).

PoP doesn't implement any business logic, and doesn't attempt to re-invent the wheel: Authentication, CRUD operations, validation, etc are all implemented by the CMS; PoP is simply a layer which makes use of all this already-existing functionality, and makes it easily available to the application.

Maintainable/Easy to debug and fix:

The architecture establishes the following foundations:

1. Everything is a module

A PoP application contains a top-most module (also called a component) which wraps other modules, which themselves wrap other modules, and so on until reaching the last level:

Hence, in PoP everything is a module, and the top-most module represents the page.

2. The module is its own API

Every module, at whichever level inside the component hierarchy (i.e. the composition of modules starting from the top-most, all the way down to the last level), is independently accessible simply by passing along its module path in the URL: /page-url/?output=json&modulefilter=modulepaths&modulepaths[]=path-to-the-module

In most libraries/frameworks in the market, the implementation of the concept of components is based on JavaScript. In PoP, a component has a progressive approach, and its implementation spans from back to front-end:

The output from requesting a URL can contain several layers: At its core it is a data layer (enough for implementing an API), which can be further extended by a configuration layer (to implement a website).

The data layer represents data in the following way:

The configuration layer can provide those properties and values required to build any kind of application:

PoP is the foundation for the GraphQL API for PoP, an exceptional implementation of GraphQL which supports features not typically supported in GraphQL: HTTP caching, composable fields, composable directives, linear complexity time to resolve queries, and native federation and decentralization, among others.

In the near future, PoP will enable to build websites and export them as static.

Alongside the code, each repository on the PoP organization account contains its corresponding technical documentation, in its README file.

Currently, most of the technical documentation is found on these repositories:

The following articles concern how different features in PoP were implemented:

Intro to PoP API, a new GraphQL server in PHP: Description of how the GraphQL API for PoP compares against a typical GraphQL

Demonstrating the PoP API, an implementation of GraphQL on steroids: Step-by-step description of solving a complex use case using the GraphQL API for PoP

Abstracting WordPress Code To Reuse With Other CMSs: Concepts (Part 1) and Implementation (Part 2): Design and implementation of strategies to make PoP become CMS-agnostic

“Create Once, Publish Everywhere” with WordPress: How through the WordPress editor Gutenberg” a PoP application can export data to be consumed in different mediums or platforms (website, app, emails, etc)

Introducing the Component-based API: Article describing all the main concepts of the PoP architecture

Caching Smartly In The Age Of Gutenberg: Caching mechanism implemented in PoP, allowing to cache pages even when the user is logged-in (to be emulated for Gutenberg)

Adding Code-Splitting Capabilities To A WordPress Website Through PoP: How PoP implements code-splitting of JavaScript files

How To Make A Dynamic Website Become Static Through A Content CDN: Mechanism implemented for PoP to route dynamic content through a CDN to improve performance

Implementing A Service Worker For Single-Page App WordPress Sites: The strategy behind the creation of the service-worker.js file in PoP (when running under WordPress), which powers its offline-first caching strategy

Contributors are welcome! Please check PoP in PHP to see what we need help with. If either you want to get involved, or simply find out more about PoP, simply send Leo an email or tweet .