LivePrinter is an open source system for live, intuitive, immediate drawing and fabrication with 3D printers. It allows people to directly draw shapes, lines, and complex objects using only code. The system serves as an introduction to the basics of 3D printing, as well as platform for experimenting with new techniques that are not allowed by current software. It also allows users to create physical forms using different functions that take into account physical properties like speed and temperature, instead of the usual visual modelling techniques. As a live performance system, LivePrinter blends mechanical music, sculpture and moving image together. It allows musical concepts and visual aesthetics to directly influence digital manufacturing toolpaths and vice versa. It demonstrates a possible future path where humans play a direct, creatively-rewarding part in a system of semi-automated, digital manufacturing.

There's a forum on https://talk.lurk.org/channel/liveprinter

You can join our email list to keep up to date with performances, demonstrations, workshops, and important updates.

Evan is on Twitter at @evanraskob and can answer questions, etc.

-- this needs an update! It is fairly out of date.

The server front-end is coded in JavaScript using NodeJS's npm build system. You will need to compile it first (or download a pre-compiled release) so download and unzip the project using the link in the above right. Then, in your project folder, open a command prompt. Make sure you have npm installed.

The web server (tornado 6) runs on Python 3 (3.6 and 3.7 tested) so you will need that installed. Then, use pip (the Python package manager) to install:

Here is a short video demonstrating the python installation on Windows (on OS X it's the same, just use Terminal instead of Command Prompt): https://youtu.be/ejlaQhOCUHw

Run the server using your Python environment of choice * it's in the liveprinter folder, called LivePrinterServer.py. By default, the server runs on port 8888 so open a web browser to http://localhost:8888 (or change it). It can run without a printer using a "fake" serial port.

A short video to get up and running in 2 minutes (assuming you've plugged your printer into your computer via USB and turned it on!) 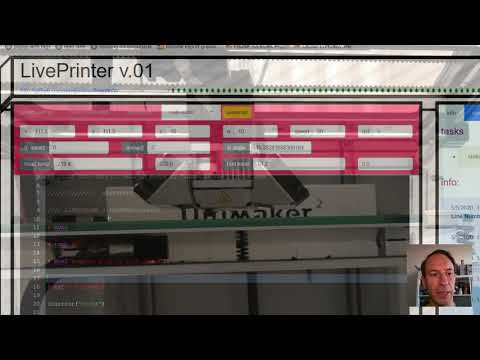 Try these instructions for using the livecoding editor and controlling the printer.

LivePrinter is an open source system for live, immediate drawing and fabrication with 3D printers. It’s particularly useful for:

LivePrinter combines the design and 3D printing of objects into a single, iterative process. Livecoding is used to control manufacturing precisely and procedurally with real-time flexibility. It brings improvisation and intuition to the act of making new computational forms. The system extends digital printing and CNC machining into the realm of performance and also has potential in design and science pedagogy.

The current software toolchains of 3D printing place the artist and designer at a difficult distance from the physical process of making. There is little space for live improvisation and experimentation, especially with key properties that directly affect printing materials, like temperature and print speeds.

You can watch a video of LivePrinter in action, running experimental tests, creating generative shapes, and exploring printing in air: 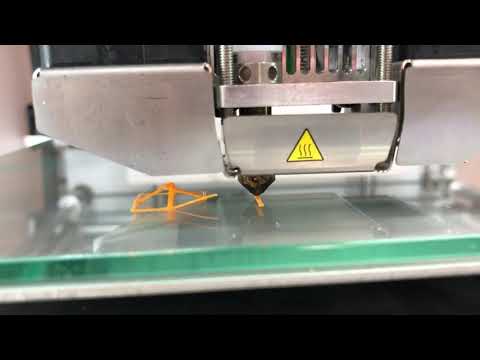 LivePrinter is designed to be:

How It Works / Developing

Overview of the system: LivePrinter is part web client and server for livecoding and part 3D printer host application on the back end. On the front end, a user will livecode in a web browser (or other web client). Their code is compiled into machine-appropriate G-Code, packaged into JSON-ROPC calls and sent via AJAX (http) to the back end, where it is sent to the printer via a serial connection. Responses from the printer are sent back to the web client. This whole process is asynchronous, for speed and for tracking which messages successfully were send (and responses received).

More than one person might be involved: the system is designed to support collaborative livecoding and potentially many 3D printers, as complex as that is! (Look at the Max/MSP example in the misc folder for an example of this)

If you fire up the server and then navigate a browser to http://localhost:8888/jsontest you can play with the API in a hands-on web page.

send arbitrary GCODE (must be connected first otherwise get exception back)

The back-end web server and websockets service uses a Tornado server written in Python and a very-adapted version of Cura's 3D printing driver that connects to a Marlin Firmware based 3D printer (currently tested on an Ultimaker 2+) and on various Prusa printers, as well as homebrew Marlin-based ones. If you want to get involved, please give us a shout! The more the better.

There is an API and function reference for the client end which needs formatting work.

An aside on Python Virtual Environments

It makes sense (in general, not just for this project) to do Python development using isolated virtual environments, to prevent contamination or clashes between modules and utilities by keeping all configuration sandboxed. This requires a global installation of virtualenv. After that we can do (on macOS and Linux at least):

Then when all is done:

LivePrinter is completely open source (AGPL 3.0). To summarise, it is built on and inspired by other open source projects:

Who is behind this

This project was started by Evan Raskob, artist, livecoder and Lecturer at Goldsmiths University (previously at the Royal College of Art in London), and part-time PhD student in arts and Computational Technology also at Goldsmiths. This project is the main practice part of his ongoing PhD study. If you'd like to get in touch, please email him at e.raskob@gold.ac.uk.