It will let you sticked on your seat until the end. Its 2D graphics and isometric view make it a different specie in its genre. You will have to face a horde of Zombies that try to get you down with the help of various weapons/power ups and different moving styles. 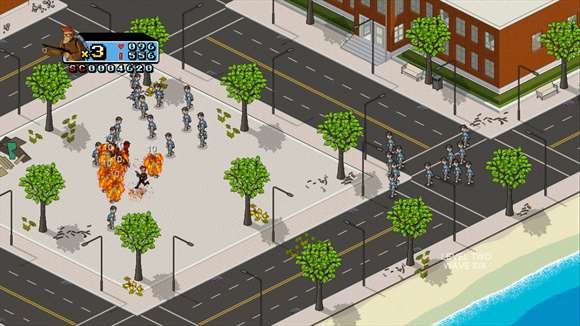 NOTE: If you want to play the original version that was published to the Windows Store you can download the commercial version released (v1.0.0) for PC Windows for free here.

If you want to build this project, this is what you are going to need:

A bit of history

This game started its development by the end of 2010 as a personal project that quickly escalated to a commercial project. It was published for the Xbox360 on November 5th of 2011. The next steps were the windows phone port release and finally the PC for the windows store and Desura on July 2014. After that the game was something like abandoned until now, it's been almost 10 years of the first release on Xbox360 so we though that would be cool to revive this project and make it open-source.

The code released is not the original (that included all the code for other platforms), it's a modification that aim to be released for PC.

We would like to make an special version that enhances it; and publish it sometime into itch.io. There is a lot of work to do:

( all marked with this symbol are "done / completed")

Hi! I'm Ferran Pons; a Senior Android Developer that works for Adevinta Spain developing the Milanuncios application. With almost 15 years of experience as a programmer, my experience covers a lot of different kind of applications, from web app development to the desktop, mobile apps and videogames. I've participated in some blockbuster games such as Burnout Paradise, DeadSpace and the Skate franchise. Also I've tried to start up my own indie videogame studio, labeled "Retrowax Games" with which I've made this game that it's published for the Xbox360 and Windows Phone and PC Windows.

For bugs, questions and discussions please use the Github Issues.

All art assets (art, music and sound) are distributed under the

This work is licensed under a Creative Commons Attribution-NonCommercial 4.0 International License.