A map layer for mapping the flow of objects. Extends Esri JSAPI and renders on the HTML canvas.

The Canvas-Flowmap-Layer extends the ArcGIS API for JavaScript (Esri JSAPI) to map the flow of objects from an origin point to a destination point by using a Bezier curve. Esri graphics are translated to pixel space so that rendering for the points and curves are mapped to an HTMLCanvasElement.

Check out our presentation from NACIS 2017.

Detailed documentation for Esri JSAPI v4 is available at README-JSAPI-4.

Detailed documentation for Esri JSAPI v3 is available at README-JSAPI-3.

Flow mapping is a cartographic necessity, yet still lacks empirical design rules (Jenny, et al. 2016). Common solutions for dynamic flow mapping include using straight lines and geodesic lines, both of which have immediate visual limitations. Using a Bezier curve for flow map lines, where each curve on the map is created with the same formula benefits mappers twofold:

1. Aesthetics. While straight lines are not inherently ugly, an overlapping or convergence of them across a global dataset can be. A series of Bezier curves created with the same formula, even when displaying an over-abundance, has a mathematical congruent flow which greatly improves the map's aesthetics. 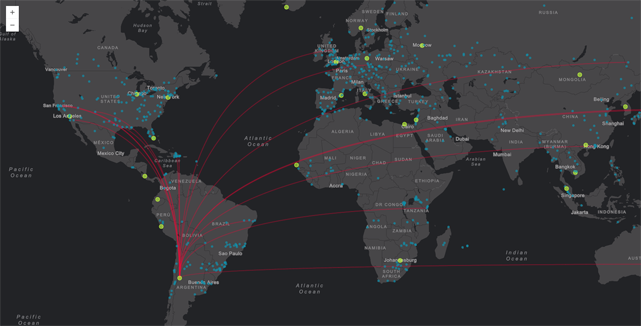 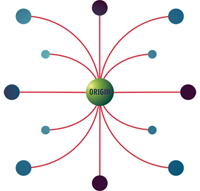 The convexity or concavity of the curve does convey the direction of the flow line, but the directionality won't be easily intuited due to its novelty. In the event that this mapping technique catches like wildfire , we can delete the second part of the previous sentence. In the mean time, we've added line animations, similar to the "ants marching" effect, but with many nice easing effects inspired by both the tween.js library and this Kirupa post.

The Canvas-Flowmap-Layer uses two separate lines when animation is added, although using two lines is not required to achieve animation. The first line is the solid, static Bezier curve, and the second line is the dotted or hashed animated Bezier curve that sits on top of the static line.

Features and Info for Cartographers and Developers

The many-to-one csv file for this implementation of the Canvas-Flowmap-Layer is similar to the concept of the one-to-many csv file explained above. In the image below, many origin cities supply the one city of Hechi.

In the csv file for the one-to-one data relationship, each origin exists on one row only along with its one destination.

The animations rely on the tween.js library to assist with changing the underlying line property values as well as providing many different easing functions and durations. See the setAnimationDuration() and setAnimationEasing() method descriptions below for more information.

You can change how users interact with the CanvasFlowmapLayer by controlling which Bezier curves appear and disappear at any time. The demos we provide show how to do this in several ways with JSAPI click and mouse-over events, coupled with using this layer's selectGraphicsForPathDisplay method.

For example, you could listen for a click event and then choose to either add to your "selection" of displayed Bezier curves, subtract from your selection, or establish a brand new selection. Alternatively, you can set the pathDisplayMode to 'all' when constructing the layer to display every Bezier curve at once.

The custom symbology examples in the API documentation below provide a starting point on how some of these configuration objects should be structured.

A copy of the license is available in the repository's LICENSE file.

A map layer for mapping the flow of objects. Extends Esri JSAPI and renders on the HTML canvas.