“All musicians are subconsciously mathematicians” – Monk

“Music is a hidden arithmetic exercise of the soul, which does not know that it is counting.” ~ Leibniz

Music Blocks is a programming language and collection of manipulative tools for exploring musical and mathematical concepts in an integrative and fun way.

Refer the following sections below to get familiar with this project: 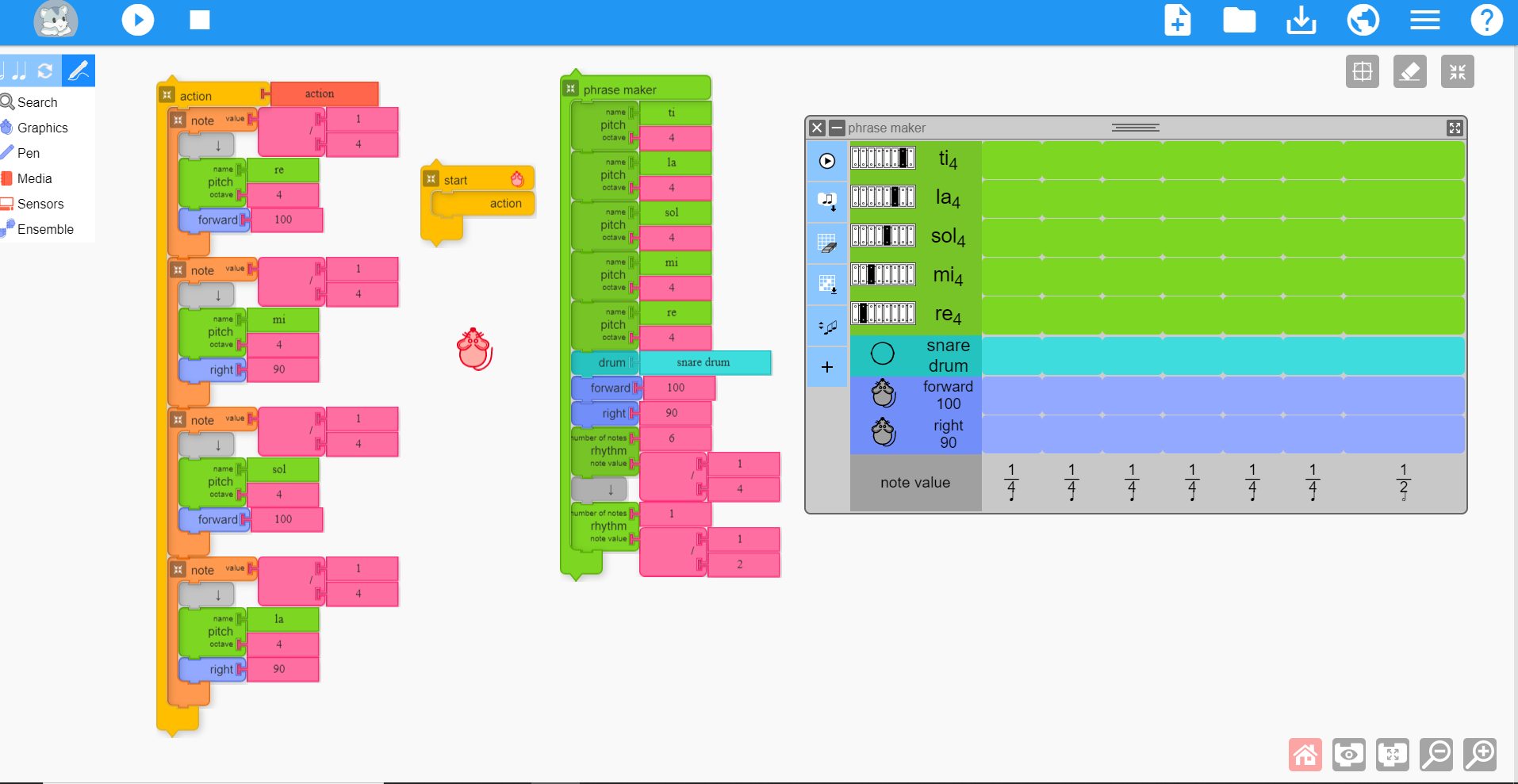 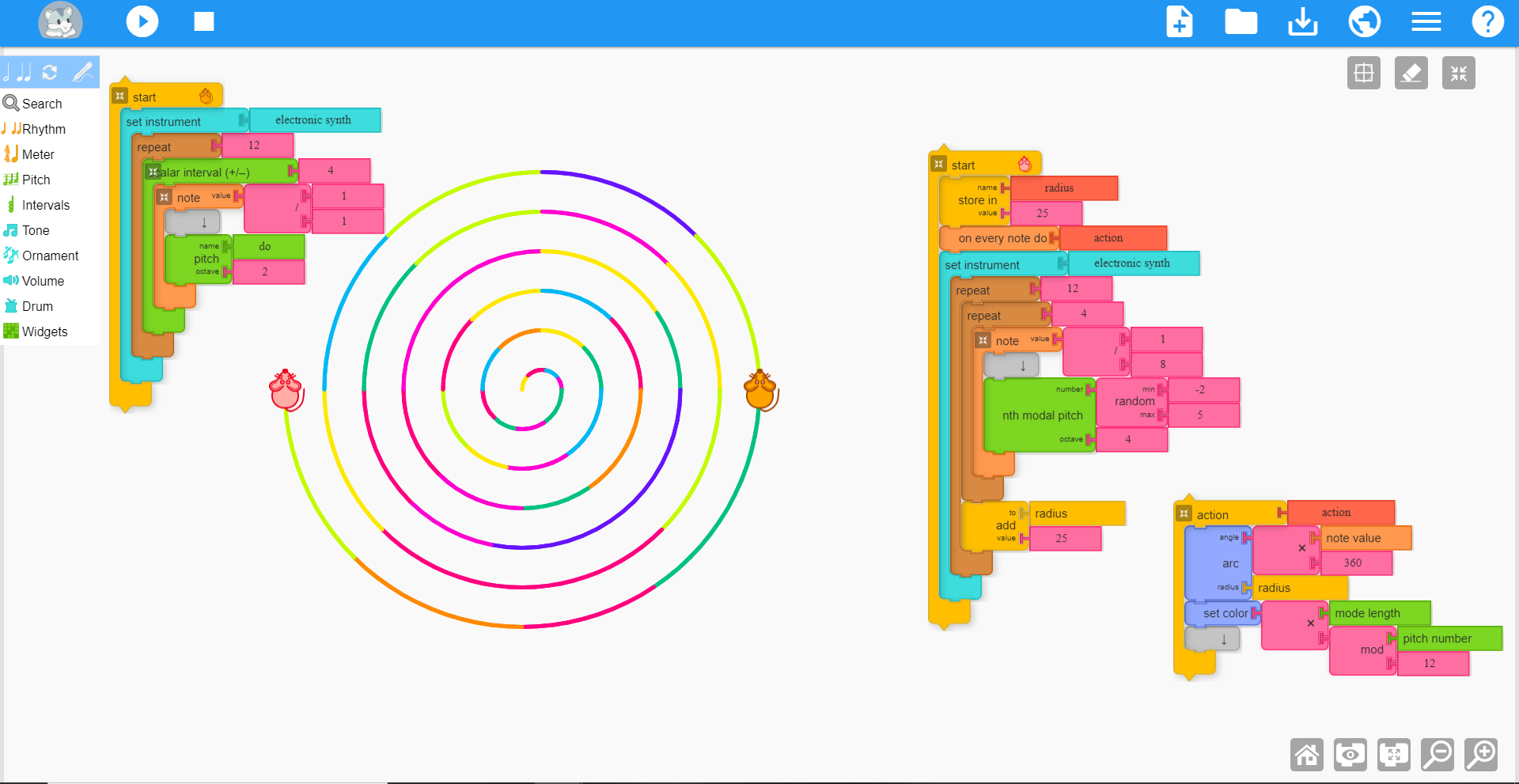 Some background on why music and programming can be found here.

Music Blocks is designed to run in a web browser.

If you want to run Music Blocks offline, download or git clone this repo and run through a local server.

How to set up a local server

Some web browsers (e.g., Firefox v68) have restrictions that prevent Music Blocks from running from the file://. To circumvent this, we provide instructions for launching a web server on your computer to which you can connect to Music Blocks.

(1) In a terminal, cd to the directory where you downloaded Music Blocks (e.g., cd /musicblocks)

(2) If you do not have Python installed, you'll need to install it. (Get it from https://www.python.org) You can test for Python in a terminal: python. Type exit() to exit Python. (Note that on some older systems, the python3 command is not bound to python. You may need sudo apt install python-is-python3.

(3) After cloning the musicblocks repository, run the command:

This works on all Operating Systems with Python.

On Windows systems with multiple Python installations, it is recommended to use this command instead:

NOTE: Make sure you can run either python or py from your terminal.

NOTE: Use ctrl + c to quit the HTTPServer to avoid socket.error:[Errno 48].

Looking for a block? Find it in the Palette Tables.

The core code for Music Blocks resides in the js directory. Individual modules are described in more detail in js README.md

Note: As with any change, please make your own copy by cloning this repository. Make your changes, test them, and then make a pull request.

Music Blocks is a fork of TurtleBlocksJS created by Walter Bender.

Devin Ulibarri has contributed functional and user-interface designs. Many of his contributions were inspired by the music education ideas, representations and practices (e.g. aspects of matrix, musical cups) developed and published by Larry Scripp with whom Devin studied at New England Conservatory and for whom he worked at Affron Scripp & Associates, LLC, Center for Music and the Arts in Education (CMAIE), and Music in Education Some of the initial graphics were contributed by Chie Yasuda.

Much of the initial coding specific to Music Blocks was done by Yash Khandelwal as part of Google Summer of Code (GSoC) 2015. Hemant Kasat contributed to additional widgets as part of GSoC 2016. Additional contributions are being made by Tayba Wasim, Dinuka Tharangi Jayaweera, Prachi Agrawal, Cristina Del Puerto, and Hrishi Patel as part of GSoC 2017. During GSoC 2018, Riya Lohia developed a Temperament Widget. Ritwik Abhishek added a keyboard widget and a pitch-tracking widget. During GSoC 2019, Favor Kelvin refactored much of the code to use promises. During GSoC 2020, Anindya Kundu did a major refactoring of the code base to support JavaScript export. Aviral Gangwar enhanced the internal representation of mode and key. Saksham Mrig fixed 70+ bugs and added support for pitch tracking and MIDI import.

Many students contributed to the project as part of Google Code-in (2015–2020). Sam Parkinson built the Planet during GCI. Emily Ong designed our mouse icon and Euan Ong redesigned the Planet code as a series of GCI tasks. Austin George refactored the toolbars as a series of GCI tasks. Bottersnike redesigned the widgets and the Block API, AndreaGon made the widgets responsive, Pidddgy refactored the update code, resulting in an order-of-magnitude improvement in CPU usage, and Nepaltechguy2 updated the local storage mechanism to use localforage.

Bugs can be reported in the issues section of this repository.

If possible, please include the browser console log output when reporting bugs. To access the console, type Ctrl-Shift-J on most browsers. You may need to set the "Default level" for the console to "Verbose" in order to see all of the output.

Please consider contributing to the project, with your ideas, your music, your lesson plans, your artwork, and your code.

Please note there is no need to ask permission to work on an issue. You should check for pull requests linked to an issue you are addressing; if there are none, then assume nobody has done anything. Begin to fix the problem, test, make your commits, push your commits, then make a pull request. Mention an issue number in the pull request, but not the commit message. These practices allow the competition of ideas (Sugar Labs is a meritocracy).