Here is a quick illustrated comparison of efficiency using various angles. Each extension was tested alone, as the only extension present. Benchmarking was performed with Chromium on Linux Mint 64-bit.

These screenshots show the memory footprint of ABP and uBlock after they have gone through this rather demanding benchmark. Once the benchmark was completed, I forced the browser to garbage collect the memory in each extension by clicking the trash icon (in dev console) a couple of times -- this is an important step, or else the shown memory footprint is not too reliable. 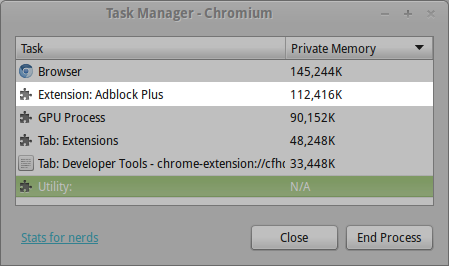 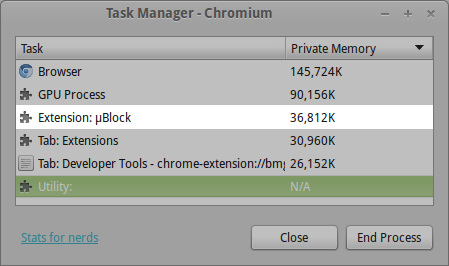 Both extensions had EasyList, EasyPrivacy, Peter Lowe's Ad Server list, and malware protection (there are more filters in µBlock for this last one).

ABP and uBlock need to evaluate the URL of each net request against their dictionary of filters, and eventually tell the waiting browser whether the request should be cancelled or not. Since the browser is waiting for an answer, this is a time critical part and determining whether the request should be allowed or not must be done as fast as possible.

Below are the average time it takes for each extension to handle a net request in their respective chrome.webRequest.onBeforeRequest handler, using the same benchmark.

Note that the results above are the tail end of running the reference benchmark, except wait set to 15, and repeat set to 1. Both ABP and uBlock set to use EasyList, EasyPrivacy, "Peter Lowe’s Ad server list", "Malware domains". ABP-specific: "Acceptable ads" disabled. µBlock-specific: default settings.

The results depend heavily on the processor: I benchmarked on an i5-3xxxK CPU @ 3.4 GHz x 4.

Now keep in mind this is the added footprint for a very simple web page which has no embedded frames. You can multiply the added footprint on the main page by the number of frames embedded on a page, so page with frames can end up consuming a lot more memory than they would have otherwise. For instance, a very simple web page with a couple of iframe in it, The Acid3 Test:

A good stress test which further demonstrate this is the infamous vim test. 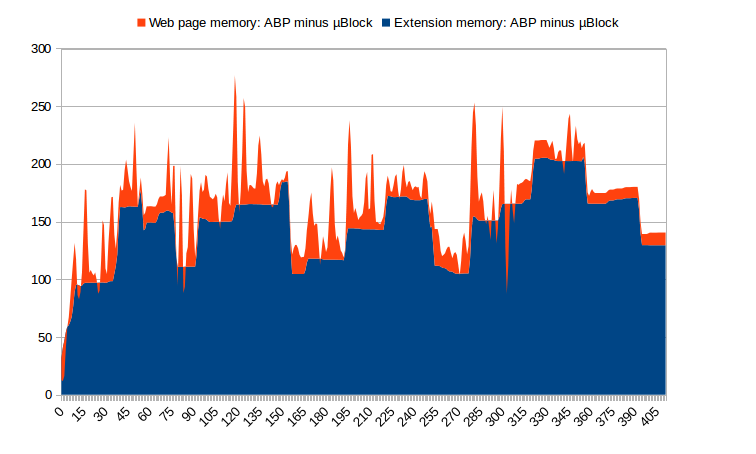 Above picture gives an overview of how much more memory Adblock Plus consumes over uBlock. It represents the extra memory ABP consumes relative to µBlock -- so essentially uBlock is the horizontal axis. If memory consumption of ABP and uBlock were exactly the same, there would be no graph. The reference benchmark was used, which consists of visiting 60 front pages of high traffic web sites.

The vertical axis represents MB. The horizontal axis is time in seconds, and the data was tediously extracted from this video (consider the video to be the raw data -- here is the spreadsheet so people can double check in doubt).

The blue area represents how much more ABP itself consumes more memory than µBlock. The orange area represents how much more ABP causes the web pages themselves to consume more memory. ABP systematically causes web pages to consume more memory, and often quite a lot, north of 100 MB for some sites. This kind of added short term memory overhead is not cheap, as it also means the CPU is working harder.

This is the benchmarks comparing CPU usage in the background page when loading si.com ten times (so you can shift one decimal to the left for per page figures). Each page load was triggered after the previous page load completed. 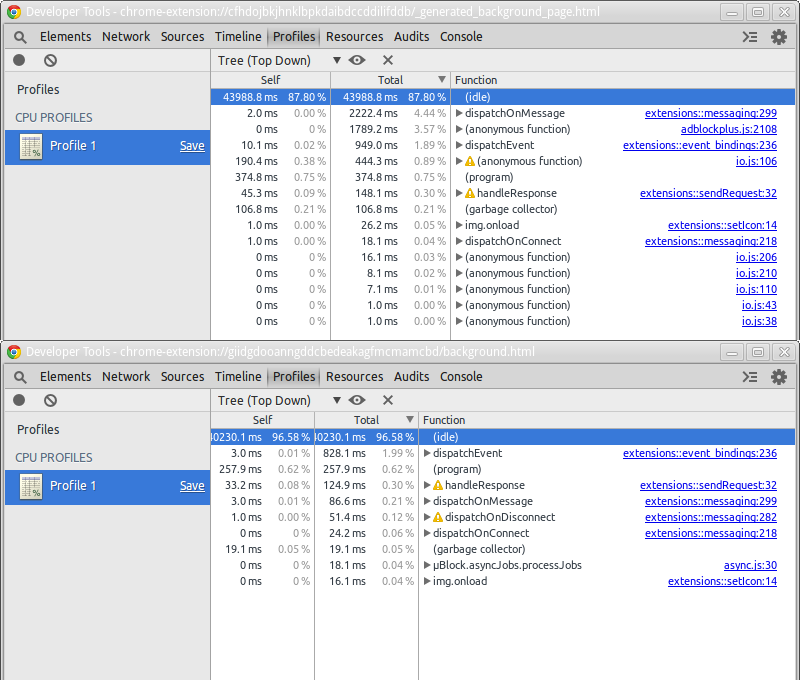 I did measure CPU usage for content scripts (above benchmarks are for background pages), but given the web page used for the benchmark is quite a bloated one, the useful figures were drowned in a sea of noise. But the fact that ABP inserts 14,000+ CSS rules caused the CPU to used be much more than uBlock (2-3 to 1 ratio) when comparing content script CPU usage (again, above is background page CPU usage).

Also, the amount of work µBlock does in its content scripts is proportional to the complexity of a web page. So given uBlock did much better CPU-wise than ABP in its content script for such a bloated web site means it was a worst-case scenario for µBlock, and yet it did its job of hiding elements between 2 and 3 times faster.