Mucuchies is the engine behind ShiftForward's dashboard. It follows a client-side architecture, with an optional HTTP server to serve the assets. It combines Dashing's beautiful style with Ember.js' great object model and Handlebars' templating capabilities.

You can find a demo for the default configuration here. An alternative demo which is optimized for 1080p screens is available here. 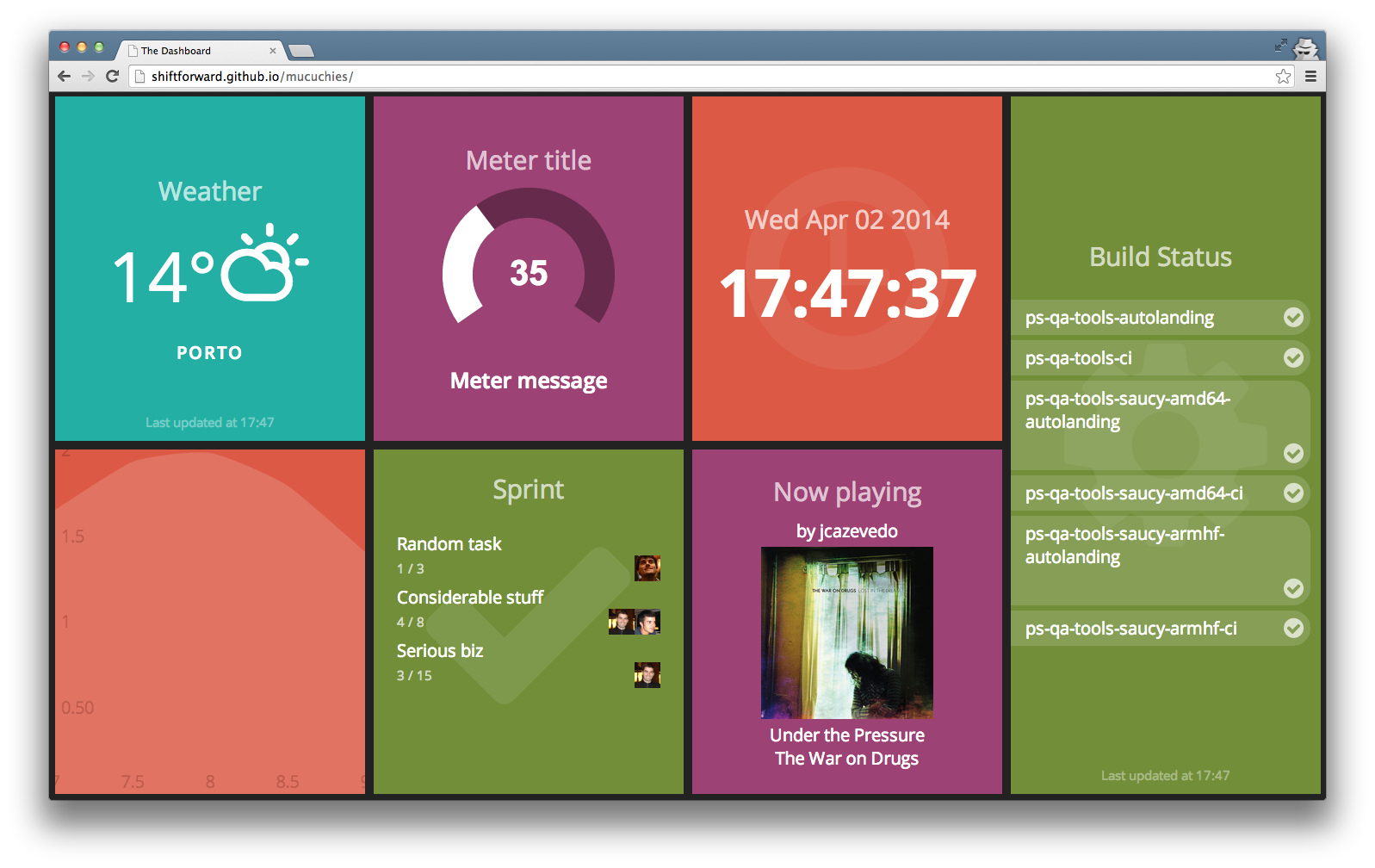 You'll be needing node as a development dependency. Refer to node's site to help you with installation instructions.

Once node is installed, run

This will install the grunt task execution script, available through grunt. It might be necessary to use sudo to run this command.

To install the development dependencies listed in the package.json file and store them locally in the node_modules/ folder, run in the project folder

The node_modules/ folder is not tracked by version control.

Once all development dependencies are installed, the development tasks can be started with

This will build development versions of the application and start watching for any changes. Gruntfile.js orchestrates things here and the --dev option skips minification of JavaScript code. If you simply want to build the application once with minification enabled, just do

Either way, the application will be available through the index.html in the root of the project, with the application code in the dist/ folder and static assets in the assets/ folder. Temporary build files will be stored on build/.

The rectangles shown in the dashboard are widgets. A widget is a component that is defined by a parameterizable class, such as Dashboard.WeatherWidget or Dashboard.ClockWidget. A dashboard configuration can have several widgets of the same type with different parameters.

Each widget is associated with a source. Sources are components that get data from internal (e.g. the current time) or external resources (e.g. APIs), possibly process it in some way and push it to widgets. As widgets, sources are defined by classes such as Dashboard.JenkinsSource or Dashboard.WeatherSource.

The file app/config-default.js, together with the app/less/config-default.less stylesheet, defines the layout of the dashboard and the widgets to be shown. Among other configurations, you can set:

See the provided configuration examples to get a grasp of the way you can configure your dashboard.

If you run grunt --config=<config_name> instead of grunt, the dashboard is built using the configuration file app/config-<config_name>.js and the respective LESS stylesheet. That way, you can have multiple configurations in the same project.

When developing a new component for your dashboard, you will most frequently be implementing a new widget, a new source or a combination of both.

In order to implement a new widget, you should create an Ember.js class that extends Dashboard.Widget inside the app/models/widgets/ folder. The templateName property of the class should point to the handlebars template. Templates should go in the app/templates/ folder. Widgets should watch the content property for the data that comes from the linked source.

In order to implement a new source, you should create an Ember.js class that extends Dashboard.Source inside the app/models/sources/ folder. Whenever the updateData method of a source is called, its argument is propagated to the linked widgets through their content property.

For example, imagine that you want to create a widget that displays a static string. You start by defining the widget:

Then, put the static_string_widget.hbs file inside the app/templates/ folder. We're simply interested in displaying the content, so the template is straighforward:

We also need a source to supply the widget with the string to display. We're assigning the "Hello World!" string to the source data on its creation:

Wiring things together, require the widget and source files in the app/app.js file:

And define the widget settings in the grid.widgets list of the config file:

The dashboard should now display the Hello World! string in its top left corner!