snoop is a powerful set of Python debugging tools. It's primarily meant to be a more featureful and refined version of PySnooper. It also includes a more accurate version of icecream and some other nifty stuff.

You're trying to figure out why your Python code isn't doing what you think it should be doing. You'd love to use a full-fledged debugger with breakpoints and watches, but you can't be bothered to set one up right now.

You want to know which lines are running and which aren't, and what the values of the local variables are.

Most people would use print lines, in strategic locations, some of them showing the values of variables.

snoop lets you do the same, except instead of carefully crafting the right print lines, you just add one decorator line to the function you're interested in. You'll get a play-by-play log of your function, including which lines ran and when, and exactly when local variables were changed.

Installation is as simple as pip install snoop.

We're writing a function that converts a number to binary, by returning a list of bits. Let's snoop on it by adding the @snoop decorator:

Note how easy it is: Just import snoop and @snoop. If you don't like the magical import, snoop.snoop and from snoop import snoop still work too. Or if you don't want to import in your project at all, just call install() somewhere once. 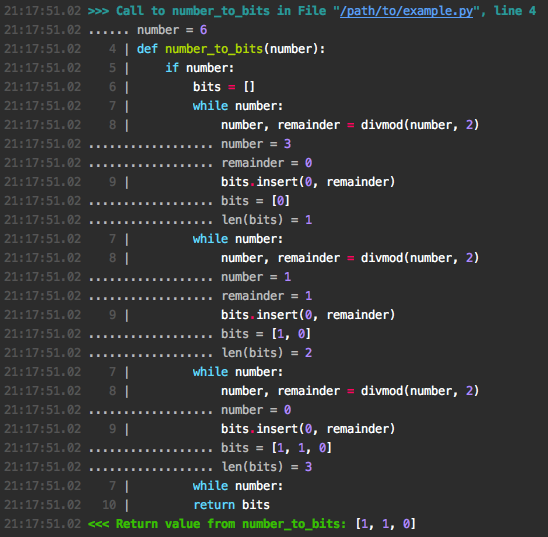 Here we specify depth=2 to mean we should also step one level down into inner function calls. We then call the function twice to see the caching in action. Here's the output: 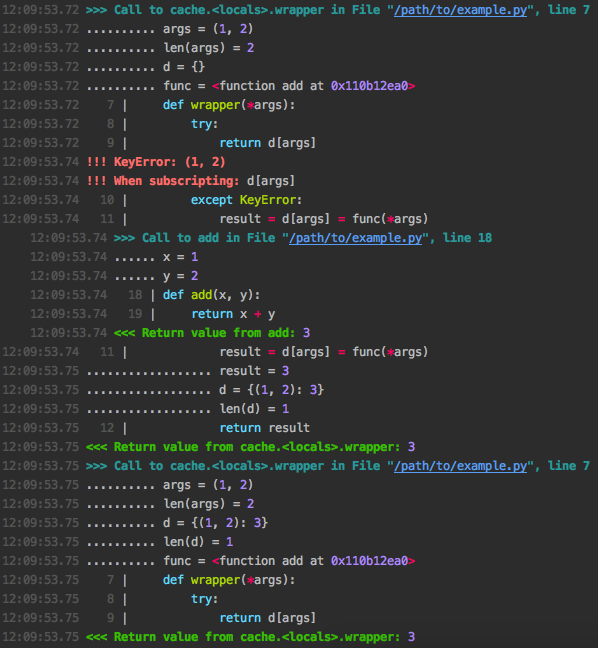 At a glance we can see that in the first call the cache lookup failed with a KeyError so the original add function was called, while in the second call the previously cached result was returned immediately.

If you don't want to trace an entire function, you can wrap the relevant part in a with block:

See Controlling watch_explode for more advanced usage of this argument.

While snoop is meant to save you from writing print calls, sometimes that's still exactly the kind of thing you need. pp aims to be the best possible version of this. It can be used alone or in combination with snoop.

pp(x) will output x = <pretty printed value of x>, i.e. it will show the source code of its argument(s) so you know what's being printed, and format the value with pprint.pformat so that you can easily see the layout of complicated data structures.

pp will return its argument directly so you can easily insert it in code without rearranging. If given multiple arguments, it will return them as a tuple, so you can replace foo(x, y) with foo(*pp(x, y)) to leave the behaviour of the code intact.

If you've already got import snoop you can also use snoop.pp. But ideally, you would use install() to avoid importing at all.

There are a few situations where pp can't find the source code of its arguments, in which case it will show a placeholder instead:

Under the hood, pp uses the library executing to locate the AST node of the function call - check it out if you'd like to write some cool utilities of your own.

pp is inspired by icecream and offers the same basic API for printing, but icecream's algorithm is less accurate than executing, and pp integrates seamlessly with snoop. It also offers pp.deep, which is unique.

'pp' stands for 'pretty-print' and totally definitely absolutely has no other meaning. It's also very easy and quick to type.

If an exception is raised, it'll show which subexpression is responsible, which looks something like this:

The @spy decorator lets you combine @snoop with the powerful debugger birdseye. The code:

is roughly equivalent to:

The only big disadvantage of @spy is that it significantly reduces performance, so avoid it for functions with many loop iterations. Otherwise you can basically always use it instead of @snoop. Then if the logs don't have the information you need you can open up the birdseye UI to see more detail, without needing to edit or rerun your code. Great for when you're feeling lazy and unsure which tool is best.

Read more about birdseye in the documentation here.

To make regularly debugging your project more convenient, run this code early on:

Then snoop, pp, and spy will be available in every file without needing to import them.

will let you decorate functions with @ss.

If you dislike this feature and would prefer to just import normally, but you want to use install() for other configuration, pass builtins=False.

As an alternative, in Python 3.7+ you can use the new breakpoint function in place of snoop if you set the environment variable PYTHONBREAKPOINT=snoop.snoop.

If you would like to leave snoop and other functions in your codebase but disable their effects, pass enabled=False. For example, if you're using Django, put snoop.install(enabled=DEBUG) in settings.py to automatically disable it in production. When disabled, performance impact is minimised and there is no output anywhere.

You can also dynamically re-enable the functions at any point by calling snoop.install(enabled=True) again, e.g. in a special view or signal handler.

install has several keyword arguments for controlling the output of snoop and pp:

If you're familiar with PySnooper and want to use snoop, there are a few things you should be aware of that you have to do differently:

If you're not sure if it's worth using snoop instead of PySnooper, read the comparison here.

snoop comes with an IPython extension that you can use in shells or notebooks.

First you need to load the extension, using either %load_ext snoop in a notebook cell or by adding 'snoop' to the list c.InteractiveShellApp.extensions in your IPython configuration file, e.g. ~/.ipython/profile_default/ipython_config.py.

Then use the cell magic %%snoop at the top of a notebook cell to trace that cell: 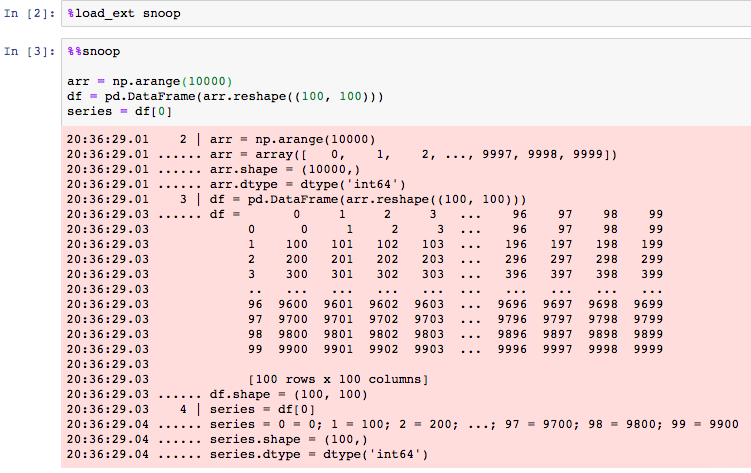 install has another parameter called watch_extras. You can pass it a list of functions to automatically show extra information about any value: local variables, watched expressions, and exploded items. For example, suppose you wanted to see the type of every variable. You could define a function like this:

You would then write install(watch_extras=[type_watch]). The result is output like this:

The functions you write should accept two arguments source and value - typically these will be the name of a variable and its actual value. They should return a pair representing the 'source' of the returned information (used only for display, it doesn't have to be valid Python) and the actual information. If you don't want to display anything for this particular value, return None. Any exceptions raised are caught and silenced.

watch_explode will automatically guess how to expand the expression passed to it based on its class. You can be more specific by using one of the following classes:

Add a slice after Indices to only see the values within that slice, e.g. Indices('z')[-3:].

Customising the display of variables

Values are rendered using the cheap_repr library to improve performance and avoid flooding the console. It has a specially defined repr function for most common classes, including from third party libraries. If a class is missing, please open an issue there. You can also register your own repr for the class. Here's an example:

You can also increase the verbosity of individual classes (see the documentation), e.g:

If you need more control than the global install function, e.g. if you want to write to several different files in one process, you can create a Config object, e.g: config = snoop.Config(out=filename). Then config.snoop, config.pp and config.spy will use that configuration rather than the global one.

The arguments are the same as the arguments of install() relating to output configuration and enabled.

I'd love to hear from users! Obviously open an issue if you have one, but also check out the issues with the 'discussion' label. There's still a lot more work that can be done and I really want people's opinions so that I can do it right.

You can also email me what you like or hate about snoop. Just knowing it's being used is helpful.

Please, write tests and run them with Tox.

Tox installs all dependencies automatically. You only need to install Tox itself:

If you want to run tests against all target Python versions use pyenv to install them. Otherwise, you can run only the ones you have already installed on your machine:

Or just install project in developer mode with test dependencies: