There is one major difference between the layout of Twigs and stock Branches: the channels don't have individual inputs.

As pictured, top input (1) is for reset and the bottom input (2) is for trig/clock. These inputs are shared by both channels

VC Factor is a combination clock/trigger divider and multiplier 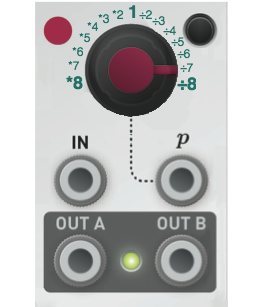 The channel's knob controls the factor, which determines whether the input is divided or multiplied and by how much

As illustrated above, turning the knob to the left produces increasing factors of multiplication, and to the right, division

When the knob is at the 1 position, the effect is bypassed the output will be the same as the input 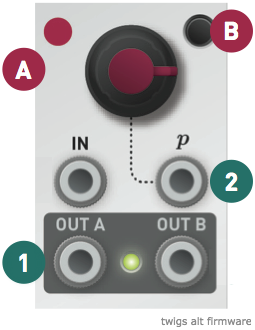 While dividing, tapping the button (B) performs a manual reset. This results in the next input trig being a strike and the counter starting over. This is the same behavior as sending a pulse to the reset input

Both outputs (1) produce the same result

At 50%, the swing effect is essentially bypassed. However, as the knob turns clockwise, every other input trig is delayed by the specified percentage

Tapping the button (B) performs a manual reset. For the swing function, this means that the next input trig will be the non-swing one. This is the same behavior as sending a pulse to the reset input

Both outputs (1) produce the same result

By default, Twigs has VC Swing in the top channel and VC Factor in the bottom

Holding the channel's button for a couple of seconds will toggle the function of that channel. The current functions of the channel are stored and will remain when the module is powered up again 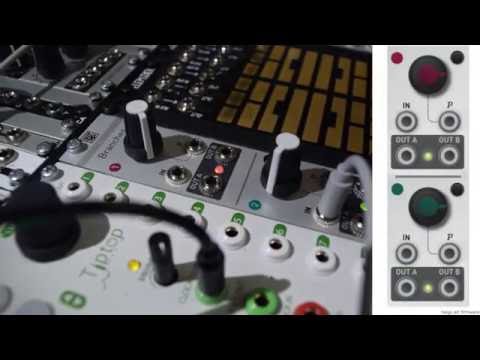 Although heavily modified, Twigs is based on the stock MI Branches firmware. That project can be found in the MI Eurorack repository and is copyright 2012 Olivier Gillet, licensed GPL3.0