No syntax coloring: wall of text. 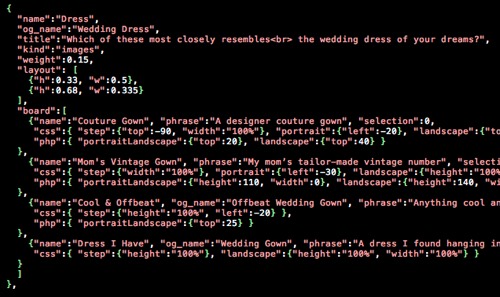 Why use separate JSON highlighting instead of just Javascript?

This is the expected behavior of the plugin:

Most trouble, little as it is, has to do with Vim's newfangled concealing, which most people aren't yet familiar with, as it was introduced as recently as Vim 7.3+. If you just don't care for concealing you can easily disable it adding let g:vim_json_syntax_conceal = 0 to your .vimrc.

Concealing is nice for viewing but when you want to edit it should get out of your way seamlessly so you can see the actual code. Thus the default behavior should be text shown normally on the line your cursor is at, on all modes (normal, visual, insert). If this isn't the case and the concealing doesn't go away (not even in insert mode), you most likely have an interfering plugin. You need to look at your concealcursor setting (which can be set through this plugin with g:vim_json_syntax_concealcursor). The specially overeager indentLine, plugin would require yet an additional let g:indentLine_concealcursor="" in your .vimrc as detailed here.

It's a good idea to test drive with the files json-test.json and jsonp-test.jsonp first thing.