Demo application to create maps with routes in order to find out the best way to deliver products.

The goal of the Logistcs application is find out the best route between two places within a map. Once created, add routes to the map, as following:

The Logistics application has quality in its core. Beyond unit tests, the following projects were developed in order to validate the whole solution:

The application code quality is evaluated with SonarQube. If you want to run the SonarScanner for Maven in order to take a look at the static code analisys' results, firstly execute (requires Docker):

And then, execute (requires JDK 11 and Maven):

After running the analysis, the Logistics application dashboard will be available in http://localhost:9000/dashboard?id=br.com.esign%3Alogistics.

Each push to this repository triggers the pipeline below: 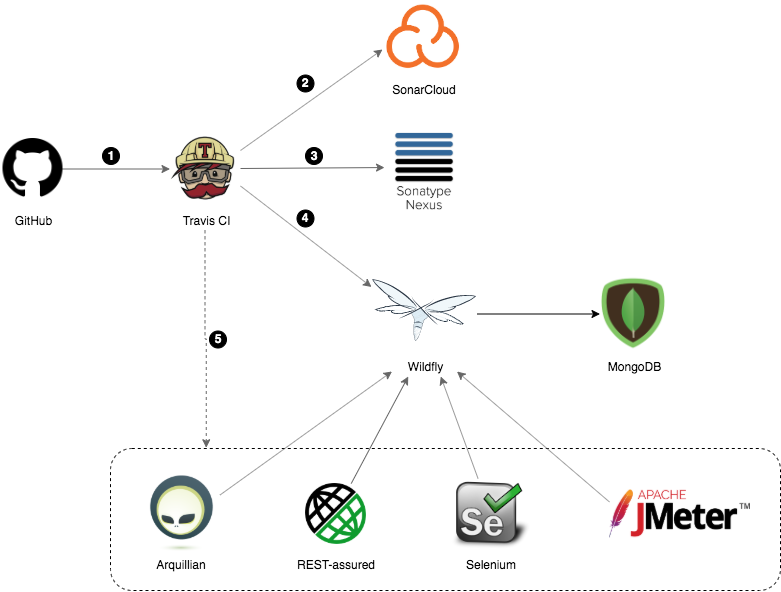 You can run the application as a Docker container. Install Docker and then run:

The environment variable MONGODB_URI is mandatory and must set the MongoDB connection URI. Remember to replace username and password with your MongoDB credentials as well as host and port with the appropriate values, according with where your MongoDB instance is avaliable on.

The Logistics application can also be executed along with MongoDB by using Docker Compose. If you've already installed Docker and Docker Compose, clone the repository and then run:

The application will be available through the URL http://localhost:8080/logistics in your browser.

Deploying to a local VM

Alternatively, you can deploy both the application and the database to a local VM, by using the Ansible playbook. If you want to know how it works, first install Ansible, VirtualBox and Vagrant, and then run:

Vagrant will download the codeyourinfra/docker Vagrant box (if it was not done yet), then will bootstrap the local VM and at the end will trigger the Ansible playbook execution.

Finally, if you want to cleanup everything, execute the command:

If you've already installed Ansible, you can make the deployment in the cloud too. In spite Ansible has support to several Cloud providers, at the moment we only provide a playbook to deploy Logistics into an EC2 instance of AWS. Once you have your AWS credentials, run:

Ansible uses Boto 3 in its Amazon modules. During the execution, the playbook creates all the infrastructure required for accessing the application through the Internet. The AMI used is codeyourinfra/docker, one of the Codeyourinfra's AWS AMIs.

Right after the deployment, check the output to find out what is the EC2 instance public IP address. You can get the IP from the inventory.yml file as well. Then, open the Logistics' URL in your browser, replacing the IP with the one you've just got. Finally, if you want to undo everything, just run:

The Logistics application has a feature toggles admin console that comes with Togglz. The console can be accessed through the /logistics/togglz endpoint, after deploying the application. In the Esign Consulting website, for example, the Logistics Feature Flags console is available on http://www.esign.com.br/logistics/togglz.

Demo application to create maps with routes in order to find out the best way to deliver products.