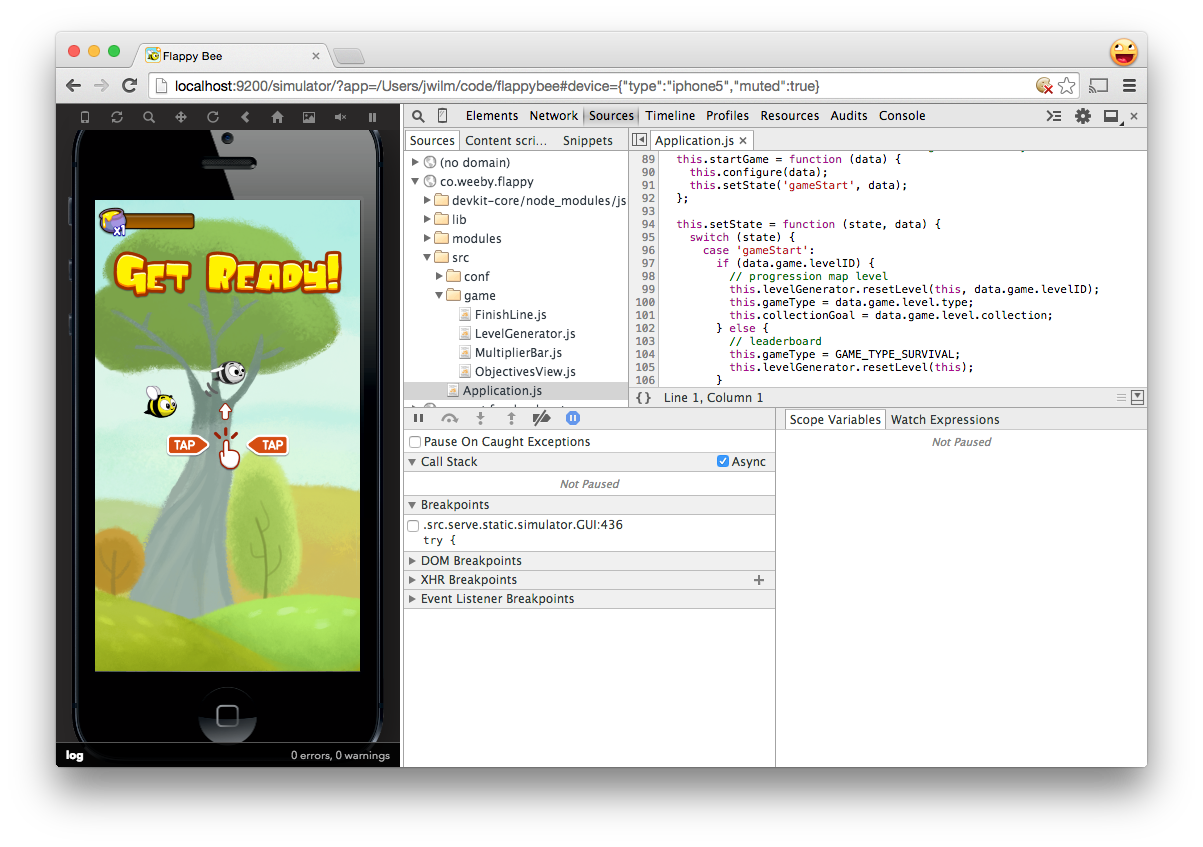 Add this to your .bashrc or /.zshrc

We recommend using brew to install these if you do not have them already.

NOTE: please ensure the apache build tools and ant are available in your path so DevKit can find them when trying to build!

Now, install devkit. You may run into some weird errors if you don't own your global node_modules folder.

You need a shortname for your game. The shortname should start with a letter and contain only letters and numbers. For this example, we'll use the shortname of mygame.

First, ensure you have the proper pre-requisites installed and on your path for the target device. See above for more details.

DevKit can create builds by specifying a build type (debug or release) and a build target (default options: native-android, native-ios, browser-desktop, browser-mobile). Debug builds include all the logs, do not strictly verify everything, and allow debugging on device via the native inspector. Release builds strip logs and try to verify as much as possible.

All your builds will be available in your /build/ folder.

Building for native-android will create an apk directly.

Pro-Tip: You can add the --install flag to automatically install the apk on the connected device, or the --open flag to install and open it.

Building for native-ios will create an xcode project and open it with xcode. Attach your device and click build.

As of DevKit2, the Native Inspector is no longer packaged with DevKit itself. To debug on device, you need to clone and run the NativeInspector(https://github.com/gameclosure/nativeinspector).

Ensure your device is plugged in, then point your browser to localhost:9220 (or whatever the NativeInspector console suggests). Now, when you run a debug build on a connected device you will be able to use the in browser debugger just like when running the simulator.

Migrating a DevKit1 Game to DevKit2

Please check docs.gameclosure.com for the latest migration instructions from DevKit1 to DevKit2. If your existing DevKit1 game has no additional dependencies, you can install DevKit2 by navigating to the top of the game directory and running the following command:

This will install the default dependencies and add your game to the DevKit2 simulator. If your app requires additional modules, please see the section about migrating addons and follow the online app migration instructions.

DevKit consists of two parts: the command-line interface (the CLI, devkit) and the API running in your game.

To update the API in your game, run devkit upgrade from inside your game's directory.

All dependencies (modules) for your game live in the modules/ folder of your game. Initially, DevKit games have only one dependency, devkit-core. You can install additional modules to enable functionality in your game such as analytics or accelerator support.

To install a module:

NOTE: be sure you have an updated version of your module that supports DevKit2 (an easy check is that DevKit2 modules require a package.json file). Migrating DevKit1 modules to support DevKit2 is fairly simple - get the instructions at docs.gameclosure.com to contribute.

Inspecting your apps from the command line

The devkit command can be used to query information about your apps. The commands apps and modules describe the apps and their modules, respectively, that devkit knows about on your system. Both commands take an optional flag --json (or -j) for logging the result to stdout in JSON format.