Wireless link planning, or more specifically assessing the viability of a wireless link such as a Wi-Fi or UHF/VHF radio link between two locations can be a complex task. Designing these links, particularly long links or links greater than 10 Km, can be challenging, as there are many factors that must be accounted for to ensure high quality transmission. Specifically, it can be difficult to assess concerns such as the existence of intrusions into the line of sight path between two points.

This project uses Google's Elevation API. Note that while Google maintains a free public facing API, Google enforces daily usage limits – currently 2,500 calls per day. If you have a Google Maps API for Business account, the daily call limit is significantly higher. See below on how to configure the library with your key.

Note, this library is only able to factor in intrusions of terrain (the surface of the earth) into the Fresnel Zone. The underlying data does not account for buildings, trees, or other potential obstructions.

Using this library to perform point-point link analysis is relatively lightweight in terms of calls to Google's API. The library will make one call each time the page is loaded or refreshed.

While not a dependency to use RFAnalysisJS, CoffeeScript is required to recompile the JavaScript for the viewshed analysis.

The resulting image shows the path between the two points with the first Fresnel zone.

See the sample code in elevation-analysis.html. Note the JavaScript for viewshed analysis is compiled from CoffeeScript.

The call to the Google Maps API should look like this:

Variables to set in the HTML file: 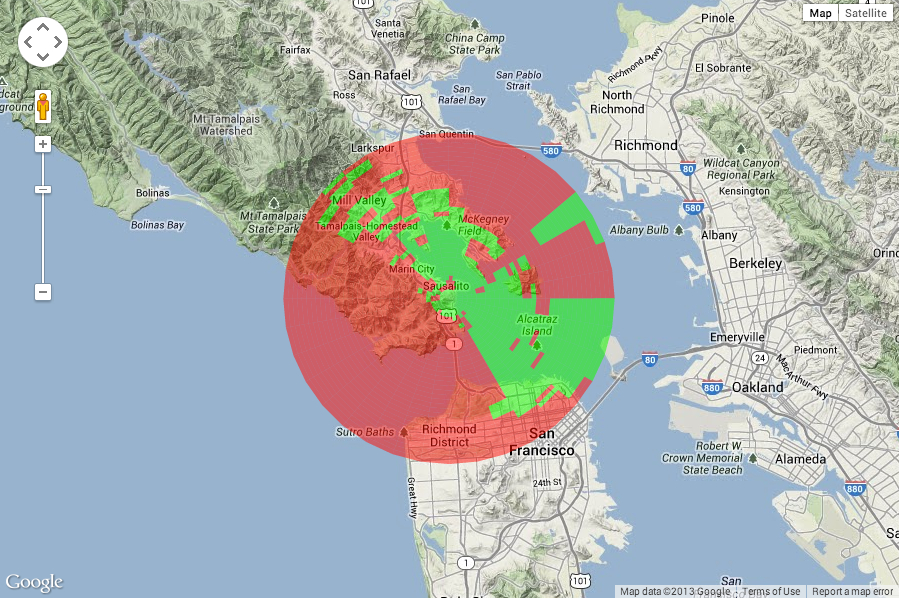 To get a higher usage limit to perform more higher resolution analysis or more analysis per day with the viewshed.js file, this library supports the use of Google Maps API for Business. Instead of calling createViewshed on a site, you would call createViewshedBusiness(<GOOGLE_MAPS_BUSINESS_CLIENT_ID>, <URL_TO_SIGN_CALLS_FUNCTION>). Note that the second parameter is a function that would be stored server-side and will sign the url to authorize your Google Maps for Business account. For more information, visit (https://developers.google.com/maps/documentation/business/webservices/auth). You may want to view the viewshed.html demo in order to utilize this feature.

You should have received a copy of the GNU General Public License along with this program. If not, see http://www.gnu.org/licenses.