This library aims to provide an easy way to render text on Android OpenGL ES (or any other OpenGL/ES capable device).

The samples/ directory contains sample code. It currently has sample for SDL and Android.

Note that the sample uses NDK's Native Activity. Therefore, it requires a device (or the emulator) running Android 2.3. But the code can be ported to work with the standard Java/JNI glue that was required for earlier android versions

This is how the android demo should look : 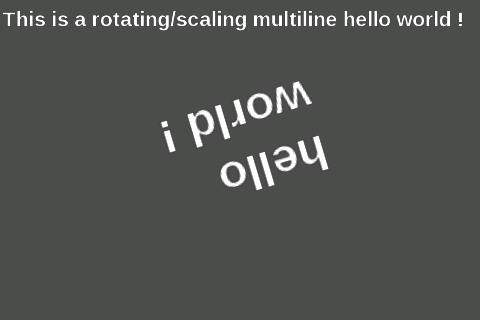 A font is loaded from a .ttf file using freetype and a font atlas (one big texture containing all the font glyphs) is created. The font altas creation is a one-time initialization process.

When a string is rendered, the font atlas texture is bound and tex coords are used to render each glyph. This mean that once the font atlas for a particular font is loaded, rendering of arbitrary string is quite fast (at least _way_ faster than using freetype to render to texture and then use the texture to draw the text).

The code is under a BSD license, see the LICENSE file. The font provided with the sample comes from the "Liberation font" project[1]. It is licensed under the GPLv2 license with some exceptions (see FONT-LICENSE.txt) [1] https://fedorahosted.org/liberation-fonts/