Public repository for the source code that runs the Knoop vs. Zombies HvZ Game Engine. View a running version of this engine at http://muzombies.org

An open source Humans vs Zombies game engine. Find a hosted version of this engine at http://muzombies.org and http://trumanzombies.org. 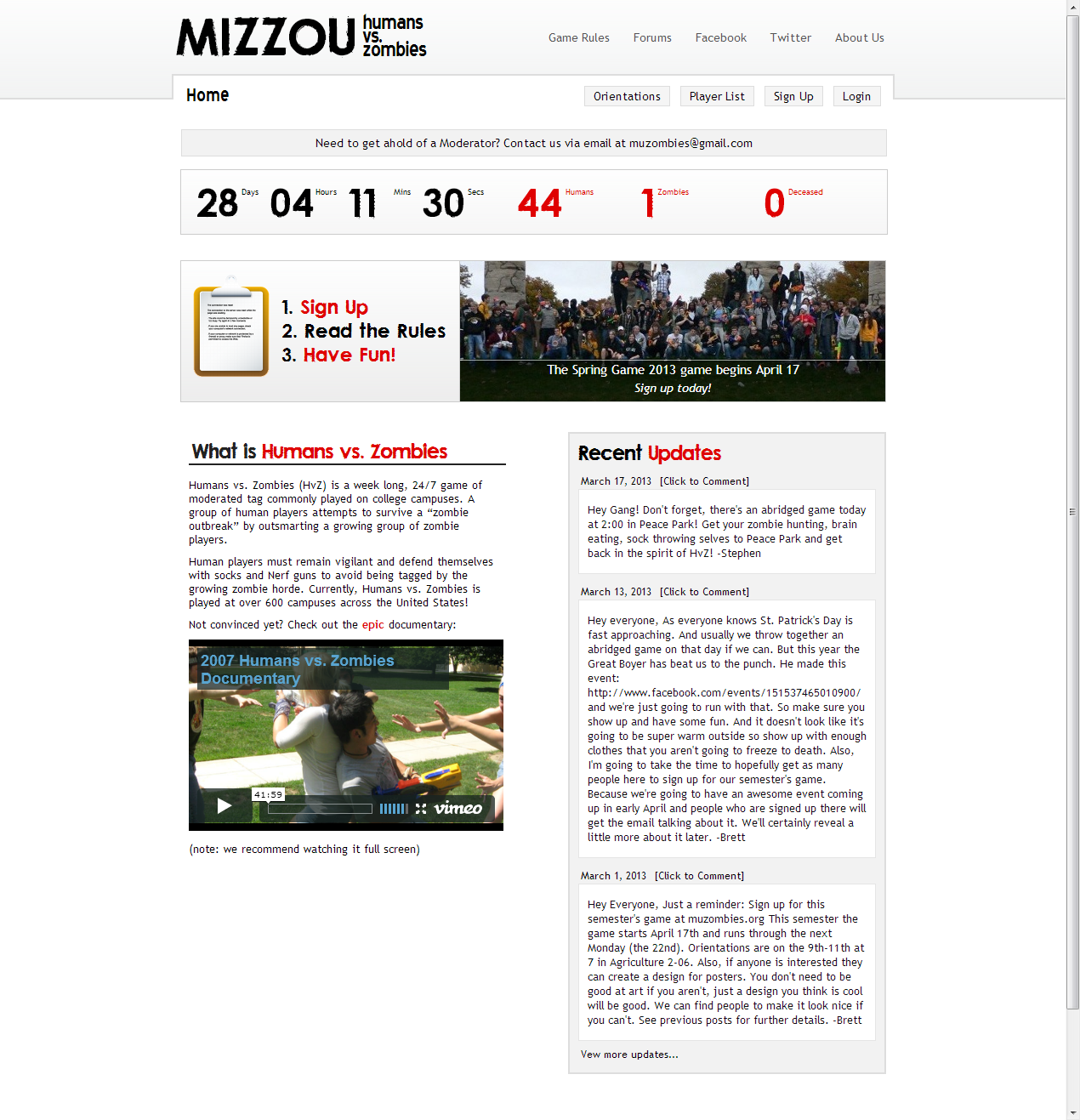 There are a few moving pieces. The engine is currently designed to run on a LAMP stack.

Running the game at the University of Missouri, we indentified several flaws around the game and engine that could be rectified with an improved game engine. This engine introduces several features that assist in running a Humans vs. Zombies game from a player standpoint and a moderator (admin) standpoint.

Email me: mikeknoop@gmail.com I'll be happy to help!

Once all the tech is up and running, as an admin, you should create your first game from the admin panel. Set it for the future sometime. You can also set up orientation times and locations. Make sure to check "current" after creating your game to set it as the current game if you intend for players to join it now.

The game is in "pre game" mode. During this time, players can sign up and join the upcoming game. They can get their code and opt-into the Original Zombie pool if they'd like. Moderators can approve players, mark players having attended an orientation, send out email, and choose original zombies.

Automatically, the game will begin at the date and time the moderator originally chose for the game (CST time by deafult, change in knoopvszombies.ini.php). At this time, the game goes into "in game" mode. All players who were marked as having attended an orientation will be kept alive. Any player who did not attend an orientation will be marked as deceased. Original Zombies are shown as humans on the website until the moderators decide to unhide original zombies through the "Game Progress" admin panel (see below).

The game continues for several days. Every 5 minutes (a cron job, game_logic.php) is run to check if anyone is about to die because they haven't been "fed" in 48 (configurable) hours. As zombie players enter codes to confirm kill, the human is automatically marked as a zombie and notified via email, and the reporting zombie will be fed and can feed two other players from a list.

The last thing for the moderators to do is uncheck "current" for the current game from the "Create Game" admin control panel. This will set the site to a neutral tone, suitable for the time inbetween one game ending and the next being announced.

A high-speed typeahead to mark players who have attended an oritentation session. Optimized for en-masse approving players -- for when you have three moderators trying to approve 200 people at your orientation.

A "player" is a user who has joined the currently available game. Edit details about any player for the current game. From code to kills to zombie status. 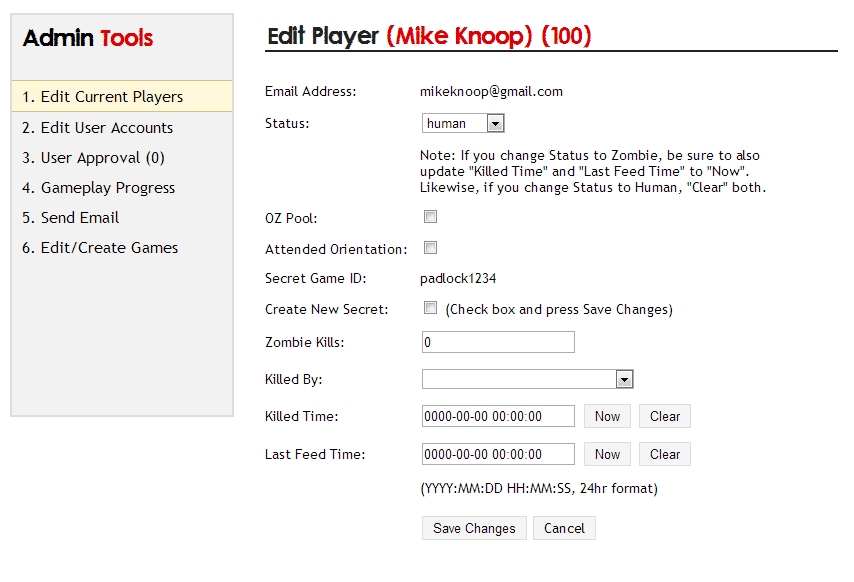 Edit user accounts (these persist between games) to promote people to moderators, remove or add them to a game, and update other various details. There are several priviledges each user can have and what admin tools they have access to. 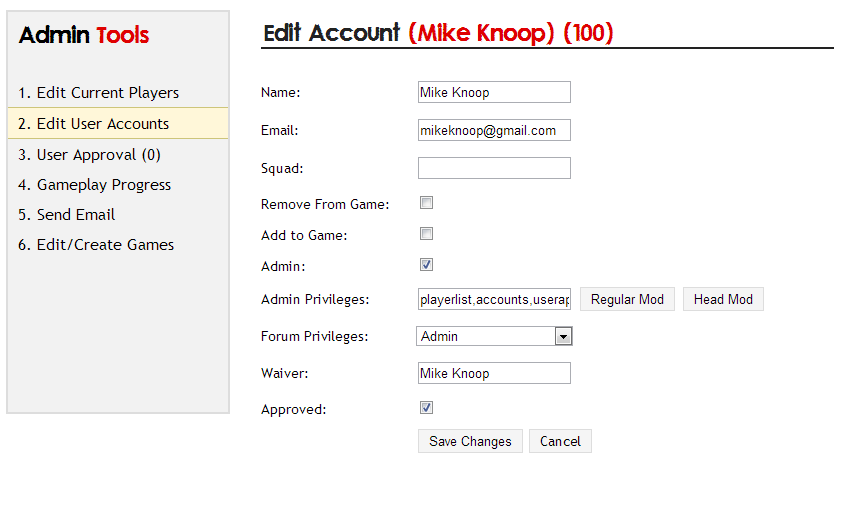 By default, if a user signs up and connects their account to Facebook they will be automatically approved. Otherwise, they will need to be manually approved by a moderator before being allowed to join a game. This is mostly to ensure players have a real name and a real photo. 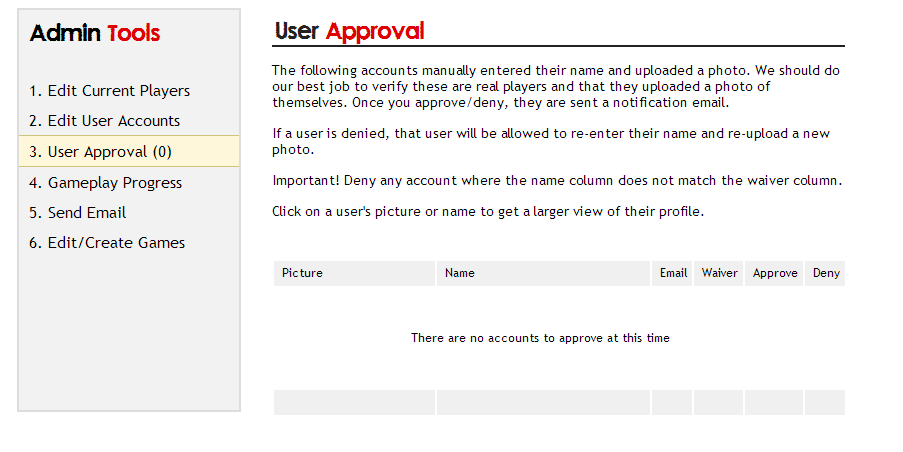 This tool lets head moderators move the game from one state to the next (pre game, in game, post game). Game choose Original Zombies here and manually open and close registration. 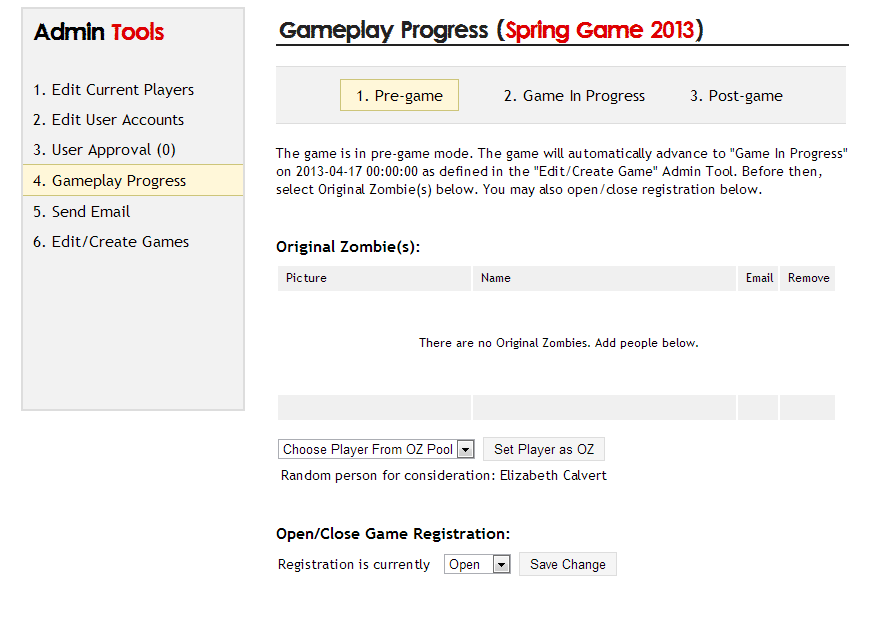 Send emails to the entire userbase or just the current players. Or just humans, or just zombies. Sends from your own SMTP server so you'll have to do the work to get that set up properly. 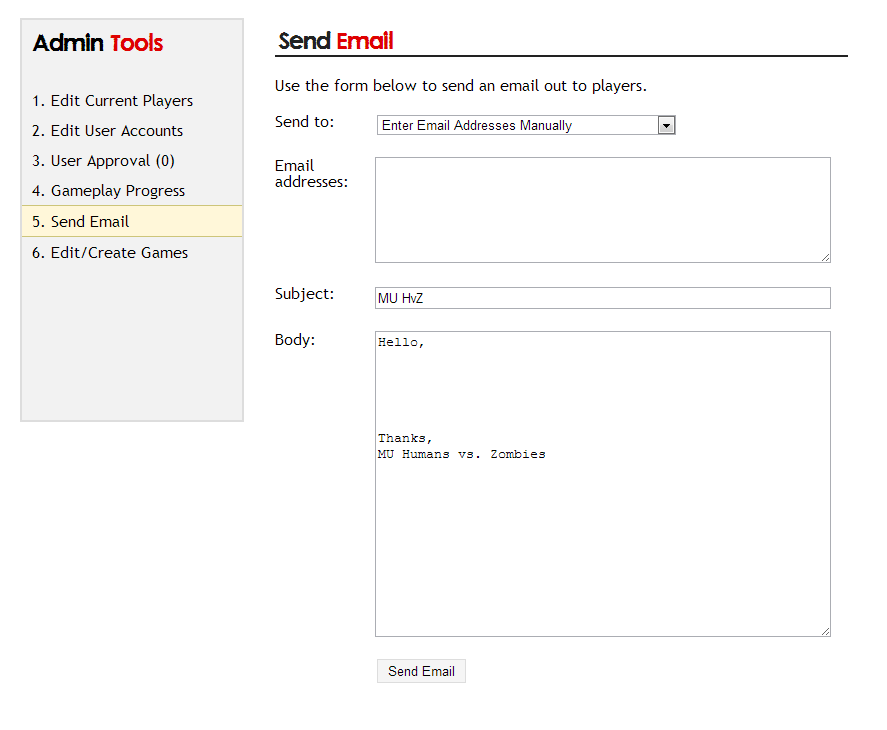 An interface to create and edit upcoming games. Name the game, set start date and time, and choose orientation locations and times. 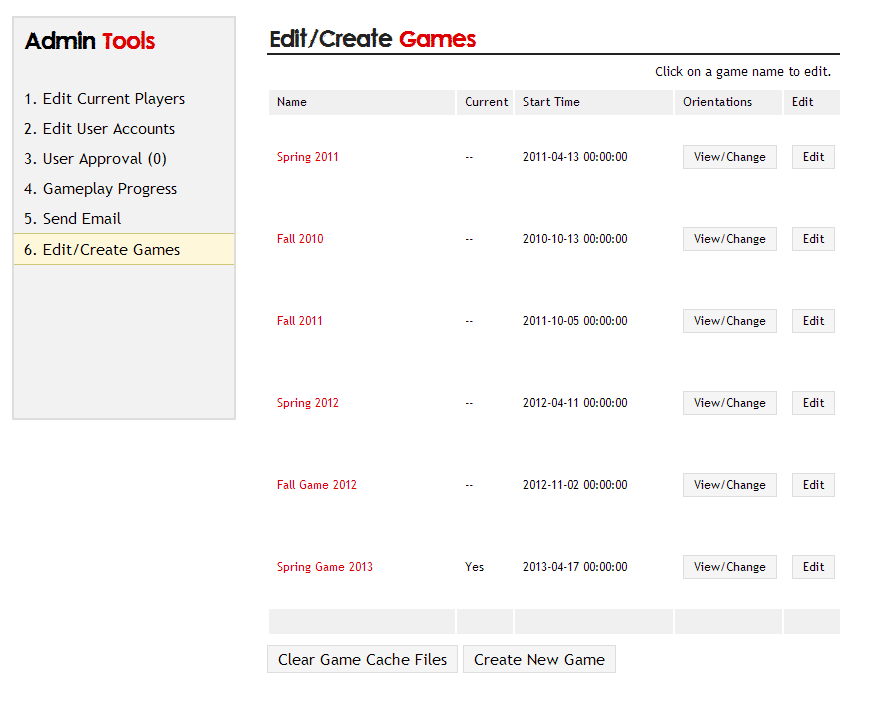 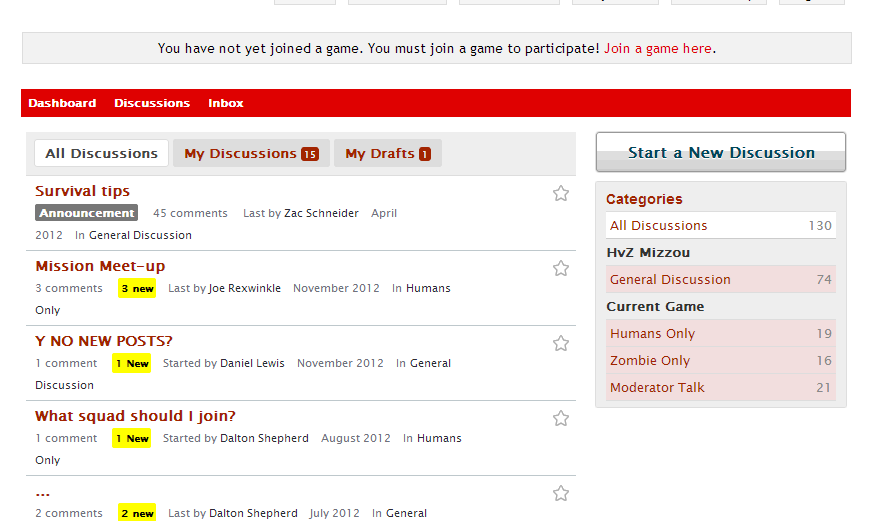 Knoop vs Zombies is available under the MIT license.

Public repository for the source code that runs the Knoop vs. Zombies HvZ Game Engine. View a running version of this engine at http://muzombies.org