Show notable forks of GitHub repositories under their names.

Can also be installed on Opera through the

An addon to help you notice notable forks of a GitHub project.

Sometimes on GitHub, projects are abandoned by the original authors and the development continues on a fork. However, the original repository is seldom updated to inform newcomers of that fact. I have often wasted effort on making a pull-request or installing old buggy versions of projects when the community had already moved to a fork.

To make matters worse, the old projects usually have higher search-engine traffic and a lot more stars than the forks. This makes the forks even harder to find. This addon tries to remedy that by adding a subscript under the name of the repository on the GitHub page of the project with a link to the most notable fork (i.e. the fork with the most stars and at least one star), if such a fork exists.

Also, if the fork is more recent than the upstream, a flame icon is shown next to it. These are called flamey forks as suggested by Mottie.

The tipsy plugin hasn't been updated since 2012 and there is a community supported fork which has merged in all the PRs. However, the alternative only has 27 stars versus the 1,888 stars of the original project (at the time of writing): 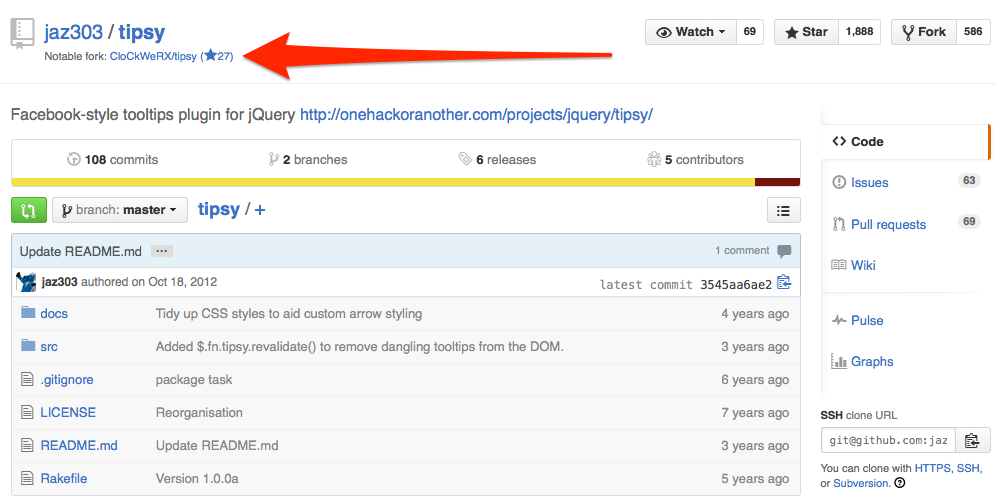 Similarly, the project slate was last updated in 2013 and has about 5,000 stars. The currently active fork only has 185 stars (at the time of writing):

In some cases, a new flavour of the project might become visible, like an internationalized fork (Semantic-UI-pt-br is Semantic-UI in a different language): 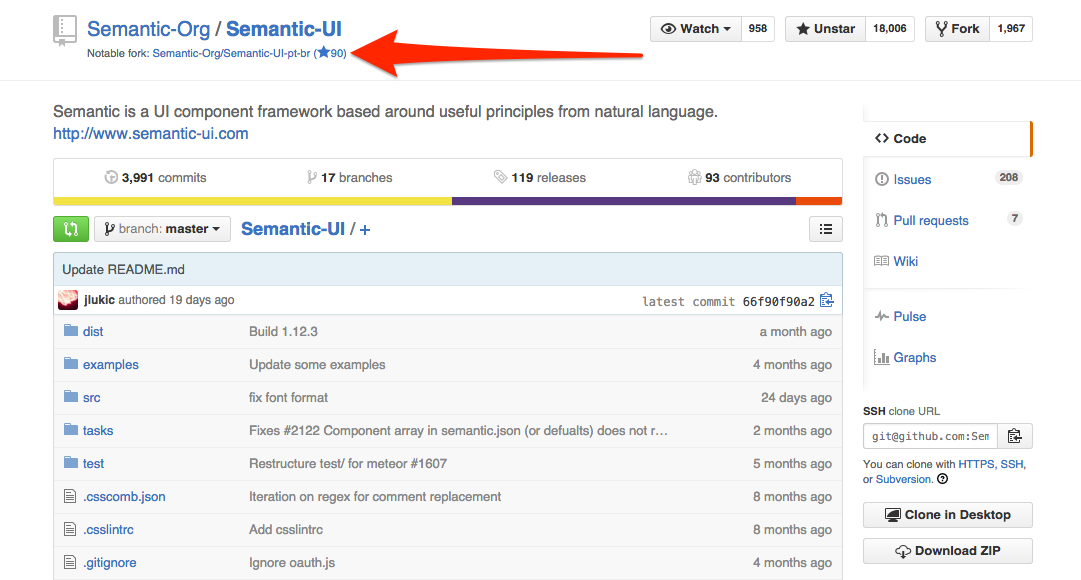 Please install the following before building the extension:

The project is supplied with a Makefile which can produce final files for both Firefox and Chrome.

The build is done by selectively copying parts of the source code to the folder ./.tmp and then archiving it again using either zip (for Chrome) or web-ext (for Firefox). The final archives are kept in the ./build folder.

The StandardJS style checker is used for setting the style guide in the code.

For testing, the extension can be loaded into Chrome by going to chrome://extensions and clicking on the Load Unpacked Extension button. Then navigate to the .tmp folder in the source code root which was created by running make chrome and load it. An alternate is to run make manifest in the root folder and then load the source code root as the unpacked extension. This will allow for a simpler edit-reload cycle, except while editing manifest.json.template.

For Firefox, the easiest way to test the packaged extension would be to download the unbranded build or the Developer Edition and loading the extension there. Otherwise, one would need to sign the extension via your account on their Addon server. Go to about:addons, to the Extensions Tab and click the Gear icon (Settings) on the top right to load the packed extension.

If the browser still complains that the package has not been signed, then go to about:config and set xpinstall.signatures.required to false. Note that this setting only takes effect on the Developer Edition and the Unbranded versions of the browser even though it shows up in about:config pages of the release channel versions as well.

This project uses icons made by Freepik and Dave Gandy from www.flaticon.com is licensed by CC BY 3.0.

bfred-it has contributed to improving the look and feel of the extension considerably. He also brought the extension from the dark age into the space age of JavaScript.

izuzak from GitHub was instrumental in helping me with bug fixing and suggesting compare API for improving the heuristic to determine if a fork is more recent than the upstream repository.

yfdyh000 added a userscript version and made the switch from Firefox Addon SDK to Web-extensions.

Jackymancs4 fixed a bug and re-enabled the settings page.

olso added an option to set how many days old the last commit on the current repository should be before the forks are shown.

Show notable forks of GitHub repositories under their names.