tl;dr: Every time you build, pull or destroy a Docker container, you are using a storage driver. Current storage drivers like Device Mapper, AUFS, and Overlay2 implement container behavior using file systems designed to run a full OS. We are open-sourcing a file system that is purpose-built for the container lifecycle. We call this new file system Layer Cloning File System (LCFS). Because it is designed only for containers, it is up to 2.5x faster to build an image and up to almost 2x faster to pull an image. We're looking forward to working with the container community to improve and expand this new tool.

Layer Cloning FileSystem (LCFS) is a new filesystem purpose-built to be a Docker storage driver. All Docker images are constructed of layers using storage drivers (graph drivers) like AUFS, OverlayFS, and Device Mapper. As a design principle, LCFS focuses on layers as the first-class citizen. The LCFS filesystem operates directly on top of block devices, as opposed to merging separate filesystems. Thereby, LCFS aims to directly manage at the container image’s layer level, eliminate the overhead of having a second filesystem that then is merged, and to optimize for density.

LCFS will also support the snapshot driver interface being defined by containerd.

The future direction is to enhance LCFS with cluster-level operations, provide richer container statistics, and pave the way towards content integrity in container images.

LCFS filesystem is an open source project, and we welcome feedback and collaboration. The driver is currently experimental.

Today, running containers on the same server is often limited by side effects that come from mapping container behavior over general filesystems. The approach impacts the entire lifecycle: building, launching, reading data, and exiting containers.

Historically, filesystems were built with the expectation that content is read/writeable. However, Docker images are constructed using many read-only layers and a single read-write layer. As more containers are launched using the same image (like fedora/apache), reading a file within a container requires traversing (up to) all of the other containers running that image.

The design principles are:

The current experimental release of LCFS is shown against several of the top storage drivers. These tests were run against a local repository to remove network variablity.

The below table shows a quick comparison of how long it takes LCFS to complete some common Docker operations compared to other storage drivers, using an Ubuntu 14.04 system with a single SATA disk. Times are measured in seconds, and the number in () shows the % decrease in time with respect to the comparison driver. 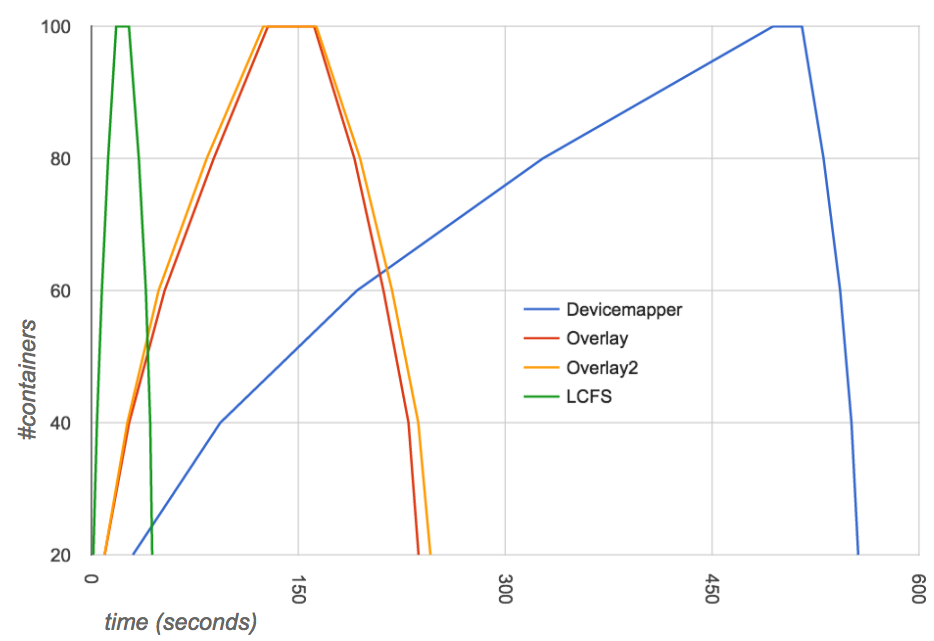 Build: The diagram below depicts the time to build docker sources using various storage drivers. The individual times measured: Device Mapper at 1512 sec, Btrfs at 956 seconds, AUFS at 574 seconds, Overlay at 914 seconds, Overlay2 at 567 seconds, and LCFS at 437 seconds. 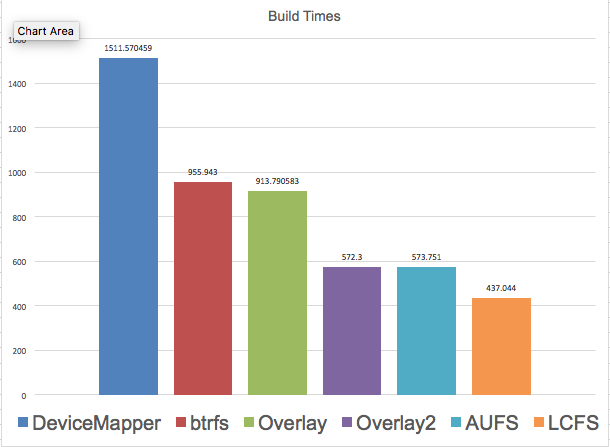 The LCFS filesystem is user-level, written in C, POSIX-compliant, and integrated into Linux and macOS via Fuse. It does not require any kernel modifications, enabling it to be a portable filesystem.

To start to explain the layers-first design, let us compare launching three containers that use Fedora. In the following diagram, the left side shows a snapshot based storage driver (like Device Mapper or Btrfs). Each container boots from its own read-write (rw) layer and read-only (init) layers. Good.

However, OS filesystems have been historically built to expect content to be read-writeable, often using snapshots of the first container’s init layer to create the second and third. One side effect becomes that almost all operations from the third container then must traverse the lower init layers of the first two containers’ layers. This leads to a slow down for nearly all file operations as more containers are launched, including reading from a file. 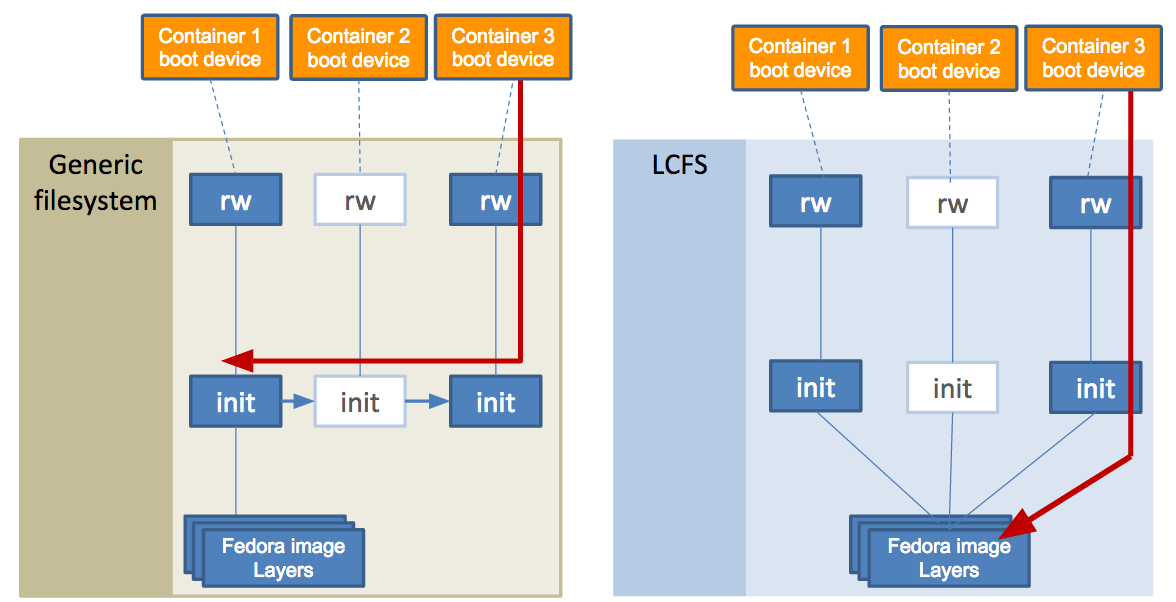 In the above diagram, the right side shows that LCFS also presents a unified view (mount) for three containers running the Fedora image. The design goal is to unchain how containers access their own content. First, launching the second container results in a new init clone (not a snapshot). Internally, the access of the second container’s (init) filesystem does not require tracking backward to an original (snapshot’s) parent. The net effect is that read and modify operations from successive containers do not depend on prior containers.

Separately, LCFS itself is implemented as a single filesystem. It takes in (hardware) devices and puts one filesystem over those drives. For more on the LCFS architecture and future TODOs, please see:

You can install LCFS by executing the script below (assuming your storage device is /dev/sdb):

For detailed instructions, you must first install the LCFS filesystem and then the LCFS v2 graph driver plugin, as described here.

The Layer Cloning Filesystem (LCFS) is licensed under the Apache License, Version 2.0. See LICENSE for the full license text.

Want to collaborate and add? Here are instructions to get started contributing code.