The library is developed by SCIPR Lab and contributors (see AUTHORS file) and is released under the MIT License (see LICENSE file).

The library is developed as part of a paper called "DIZK: A Distributed Zero Knowledge Proof System".

WARNING: This is an academic proof-of-concept prototype. This implementation is not ready for production use. It does not yet contain all the features, careful code review, tests, and integration that are needed for a deployment!

The directory structure is as follows:

A prover who knows the witness for an NP statement (i.e., a satisfying input/assignment) can produce a short proof attesting to the truth of the NP statement. This proof can then be verified by anyone, and offers the following properties.

These properties comprise a zkSNARK, which stands for Zero-Knowledge Succinct Non-interactive ARgument of Knowledge. For formal definitions and theoretical discussions about these, see [BCCT12] [BCIOP13] and the references therein.

The library has the following dependencies:

This library uses Apache Spark, an open-source cluster-computing framework that natively supports Java, Scala, and Python. Among these, we found Java to fit our goals because we could leverage its rich features for object-oriented programming and we could control execution in a (relatively) fine-grained way.

While other libraries for zero knowledge proof systems are written in low-level languages (e.g., libsnark is written in C++ and bellman in Rust), harnessing the speed of such languages in our setting is not straightforward. For example, we evaluated the possibility of interfacing with C (using native binding approaches like JNI and JNA), and concluded that the cost of memory management and process inferfacing resulted in a slower performance than from purely native Java execution.

Start by cloning this repository and entering the repository working directory:

Next, fetch the dependency modules:

This library comes with unit tests for each of the provided modules. Run the tests with:

Using Amazon EC2, the profiler benchmarks the performance of serial and distributed zero-knowledge proof systems, as well as its underlying primitives. The profiler uses spark-ec2 to manage the cluster compute environment and a set of provided scripts for launch, profiling, and shutdown.

Remember where the directory for spark-ec2 is located, as this will need to be provided as an environment variable for the scripts as part of the next step.

To begin, set the environment variables required to initialize the profiler in init.sh. The profiling infrastructure will require access to an AWS account access key and secret key, which can be created with the instructions provided by AWS.

Next, start the profiler by running:

The launch script uses spark-ec2 and the environment variables to setup the initial cluster environment. This process takes around 20-30 minutes depending on the choice of cluster configuration.

After the launch is complete, upload the DIZK JAR file to the master node and SSH into the cluster with the following command:

Once you have successfully logged in to the cluster, navigate to the uploaded scripts folder and setup the initial cluster environment.

This creates a logging directory for Spark events and installs requisite dependencies, such as Java 8.

Lastly, with the cluster environment fully setup, set the desired parameters for benchmarking in profile.sh and run the following command to begin profiling:

We evaluate the distributed implementation of the zkSNARK setup and prover. Below we use instance size to denote the number of constraints in an R1CS instance.

We measure the largest instance size (as a power of 2) that is supported by: 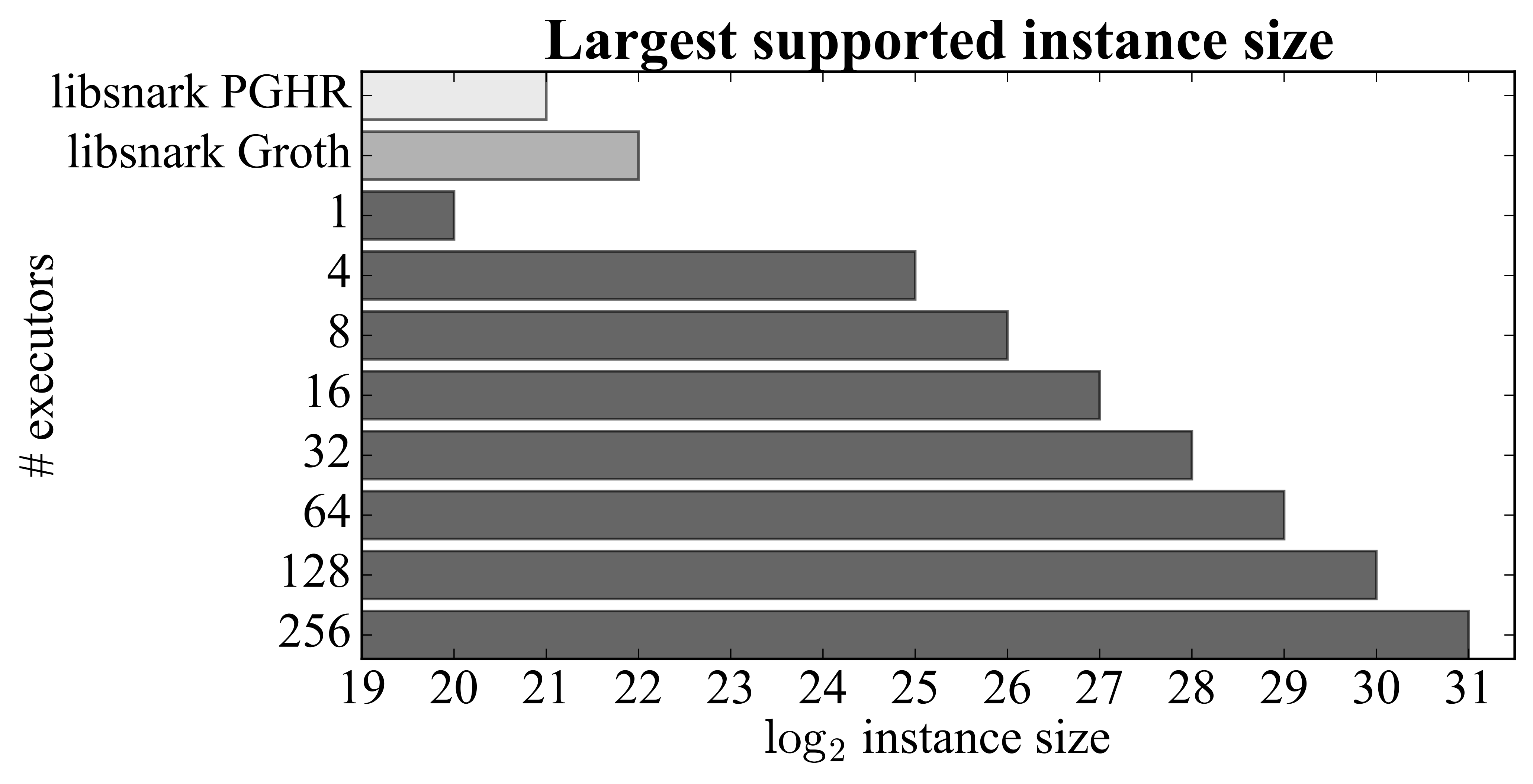 We see that using more executors allows us to support larger instance sizes, in particular supporting billions of constraints with sufficiently many executors. Instances of this size are much larger than what was previously possible via serial techniques. 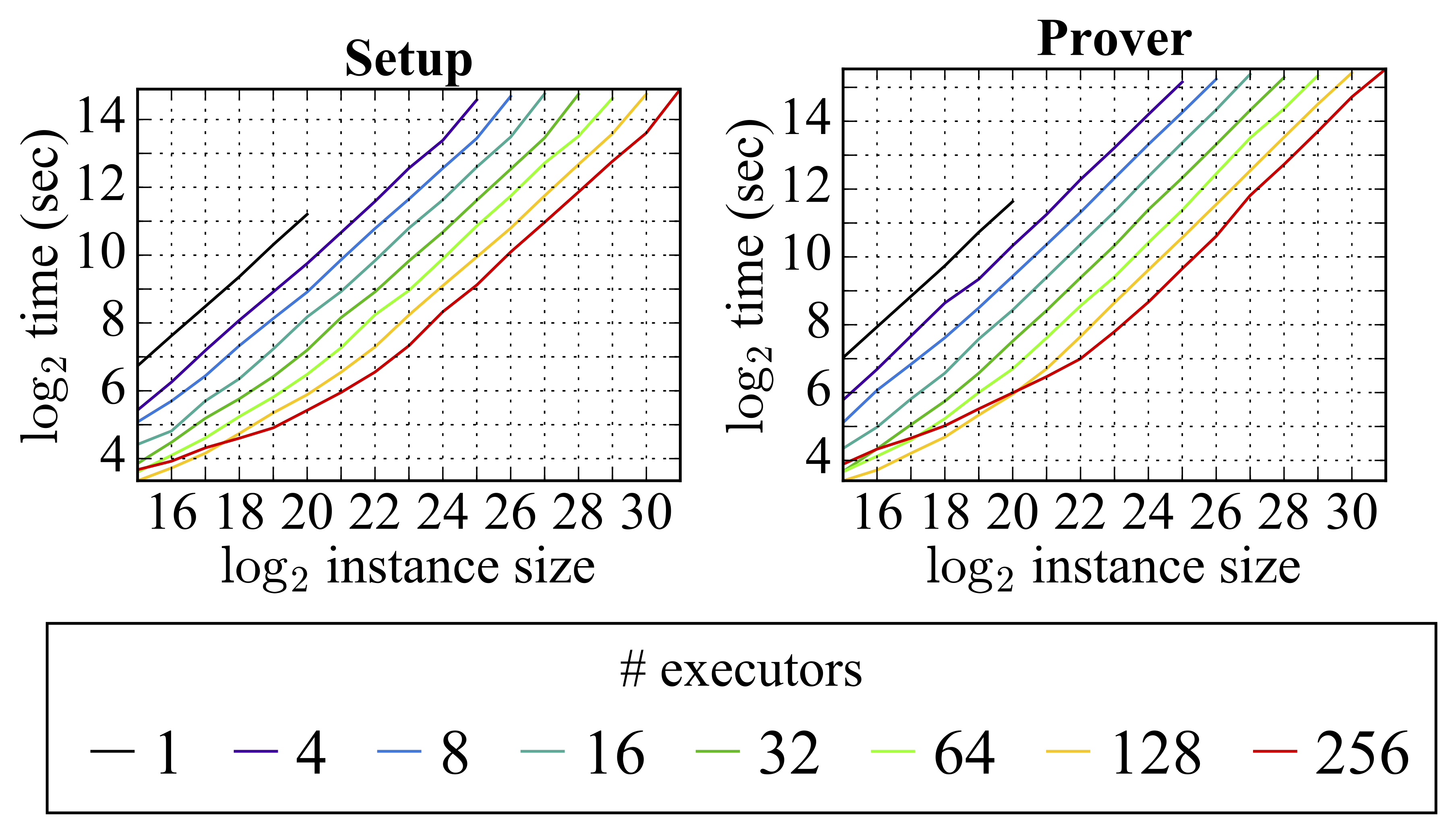 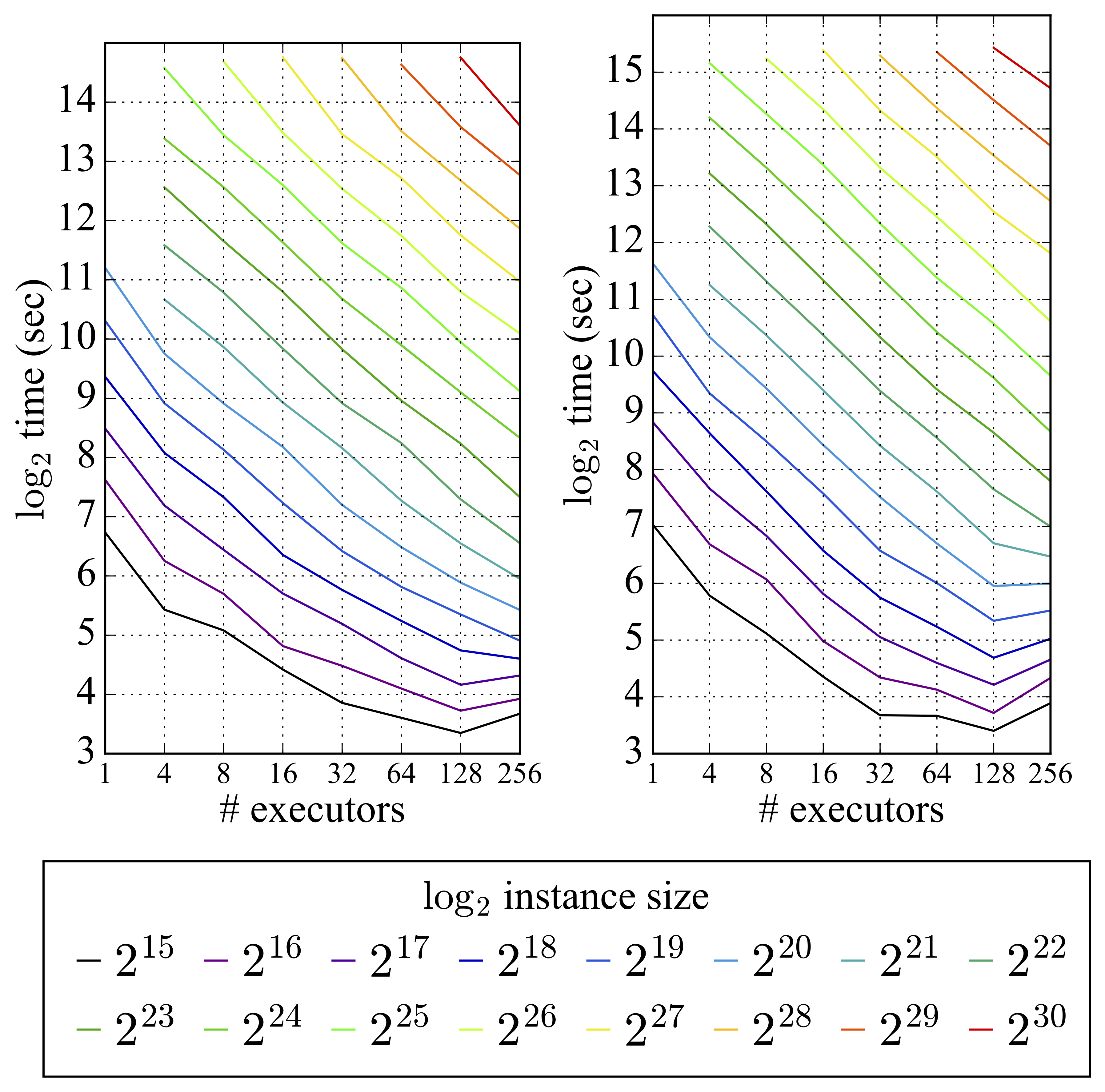 Our benchmarks of the setup and the prover show us that:

[Gro16] On the size of pairing-based non-interactive arguments, Jens Groth, International Conference on the Theory and Applications of Cryptographic Techniques (EUROCRYPT), 2016

[Pip76] On the evaluation of powers and related problems, Nicholas Pippenger, Symposium on Foundations of Computer Science (FOCS), 1976

[Pip80] On the evaluation of powers and monomials, Nicholas Pippenger, SIAM Journal on Computing, 1980

This work was supported by Intel/NSF CPS-Security grants, the UC Berkeley Center for Long-Term Cybersecurity, and gifts to the RISELab from Amazon, Ant Financial, CapitalOne, Ericsson, GE, Google, Huawei, IBM, Intel, Microsoft, and VMware. The authors thank Amazon for donating compute credits to RISELab, which were extensively used in this project.