This project is a simple pipeline implementation derived from the pipeline of Mallet (http://mallet.cs.umass.edu, some source has brought from there as you can find in comments) with some interesting features (some of them to appear). Specifically, Pipe, SerialPipes and Instance classes from the Mallet framework were transformed into AbstractPipe, SerialPipes and Instance BDP4J classes respectively. Using this architecture as a starting point, we implemented some interesting features, achieving a product that is different from the Mallet pipeline implementation.

BDP4J tasks are represented as simple pipes. Moreover, the orchestration of pipes is defined through classes SerialPipes and ParallelPipes. These details together with the basic design of BDP4J are shown in Figure 1. To facilitate readability, only relevant methods/ attributes have been included in the classes shown in the diagram. Please refer to the javadoc documentation to obtain a complete list. 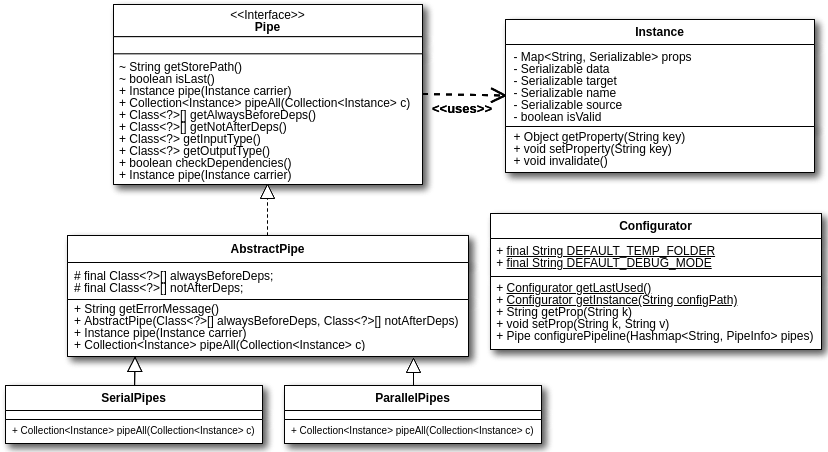 BDP4J Pipe interface was created to allow developers to implement their tasks by extending, if necessary, from other classes. However, the use of AbstractPipe abstract class provides the implementation of all methods of Pipe interface, except for pipe (which stands for the specific work that should be done), to simplify the development of tasks. SerialPipes class keeps the same functionality that was originally provided in Mallet software while slightly changing the instance processing flow. Finally, BDP4J adds the support for parallel tasks execution through the class ParallelPipes. Configurator class is used for loading pipelines from files and is explained below.

Each pipe or task implemented in BDP4J must implement the methods getInputType and getOutputType to indicate the type of data included in the Instance before and after executing it. This information is used by SerialPipes and ParallelPipes to check data types in the orchestration. Additionally, these types should dynamically be checked with the Instance after executing the task.

When creating a task by extending the AbstractPipe class, the developer must call on its constructor to specify “Always Before” (alwaysBeforeDeps attribute) and “Not After” (notAfterDeps attribute) task execution constraints. “Always Before” constraints indicate which tasks must be executed before the current one. NotAfter dependencies represent pipes that cannot be executed after one.

Constraints based on the kind of pipes.

BDP4J has divided the tasks in the following categories:

These task categories allow including additional constraints on tasks. Hence, the input and output data types of a task (getInputType and getOutputType) should be the same for all tasks except for TransformationPipe, which could be different. Moreover, the number of instance properties should be increased after an instance is processed through a PropertyComputingPipe, and the target attribute of an Instance should not be null after the execution of a TargetAssigningPipe. Finally, the number of TargetAssigningPipe included in a pipeline must be 0 or 1.

Currently, the support of parallel processing schemes in BDP4J is limited to the use of ParallelPipes task orchestration class. When several tasks are marked to be executed in parallel, they are executed in separate threads.

To adequately support burst data processing and data sharing, we need all instances included in a data burst to get processed by a certain task, in order to fill the shared information. To cope with these situations, BDP4J executes each task on all available instances of the burst before starting the execution of the next task. This behaviour was implemented in pipeAll methods of orchestration schemes (SerialPipes and ParallelPipes).

This functionality is connected with the dynamic loading of tasks from *.jar files and cannot be used in independently. Configurator class (see Figure 1) provides the functionality of loading the pipeline configuration using DOM API. The XML file should contain the configuration/general/pluginsFolder parameter, which allows defining the directory where the .jar files containing task definitions are located.

The dynamic loading of tasks from jar files was implemented through the default Java service-provider loading facility (java.util.ServiceLoader included in Java 8). Using this facility, BDP4J searches for Pipe implementations included in the location specified by pluginsFolder parameter. To facilitate the use of standard Java service loader by avoiding the manual creation of file META-INF/services/org.bdp4j.pipe.Pipe, all classes implementing tasks can be annotated with the @AutoService(Pipe.class). Figure 2 shows how the orchestration of a pipeline can be easily represented in XML format (Figure 2a) and loaded for its execution using BDP4J framework (Figure 2b). 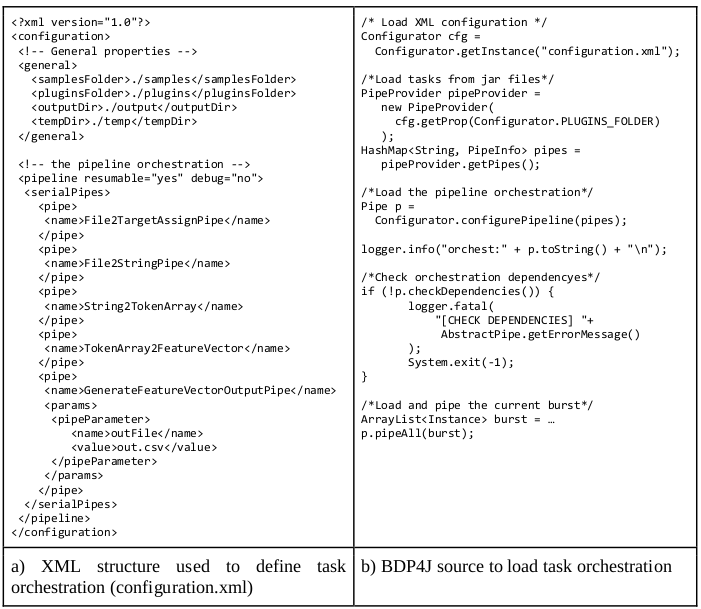 The source code included in Figure 2b (configurePipeline method) makes it possible to automatically instantiate as many SerialPipes and ParallelPipes as necessary to load the orchestration and configure tasks (because task configuration parameters are also included in XML, Figure 2a).

After processing some data bursts, they can be analysed by using external Weka ML library. We have implemented a feature to transform a BDP4J dataset stored in memory (Dataset class) to Weka dataset (weka.core.Instances) through the getWekaDataset method. Additionally, the CSVDatasetReader class implements the loading of a CSV file to instantiate a BDP4J Dataset (Figure 3b). 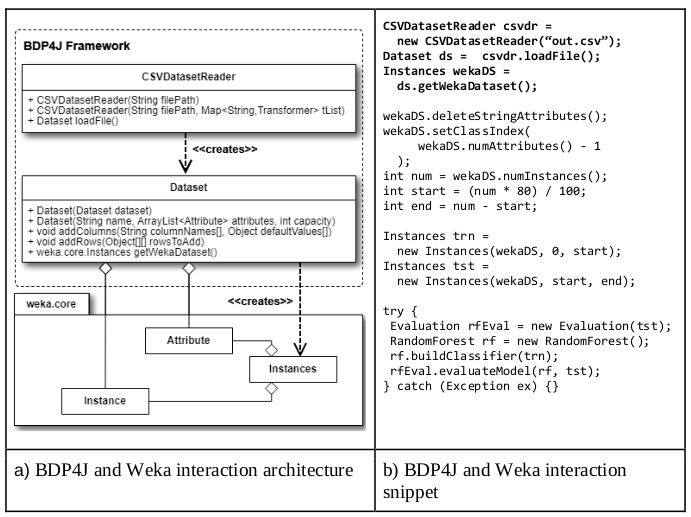 Resume execution from a particular task

BDP4J supports the resumption of the execution of a pipeline that has been stopped for any reason (an application failure, accidental power down of computer...). To this end, ResumableSerialPipes and ResumableParallelPipes were implemented. The inner operation of the mentioned classes includes saving the state of instances after executing each task to allow resuming the pipeline from the last successfully executed task. One of the most relevant challenges to implement the resuming functionality was its compatibility with the data sharing between tasks. To this end, pipes can be marked by implementing SharedDataConsumer and/or SharedDataProducer interfaces. These interfaces include the methods readFromDisk and writeToDisk, respectively, to allow the programmer defining how to save and read the shared information to make it available when resuming the execution of a pipeline.

Additionally, the resuming behavior can be achieved with an XML file using resumable and debug modifiers included in pipeline tag. When resumable is set to “yes” (“true” or “1”), the pipeline can be resumed. The debug modifier included in pipeline could be set to “no” (“false” or “0”) only if the last complete result of a task remains stored on disk, or “yes” if all partial results are kept on disk (useful to manually drop steps and repeat tasks and only applicable to ResumableSerialPipes).

Given the support of resuming a pipeline from a certain position, it was implemented the debugging mode function. It allows developers of a task to avoid the processing of all previous required tasks (when they were previously executed) in order to reduce the time required to test whether the new task is operating properly. The code snippets (XML and Java) included in Figure 4 provide a detailed description of how to take advantage of this functionality when the orchestration is defined in XML (Figure 4a) or in Java (Figure 4b). We highlighted in bold the instructions used to select the task that is being debugged. 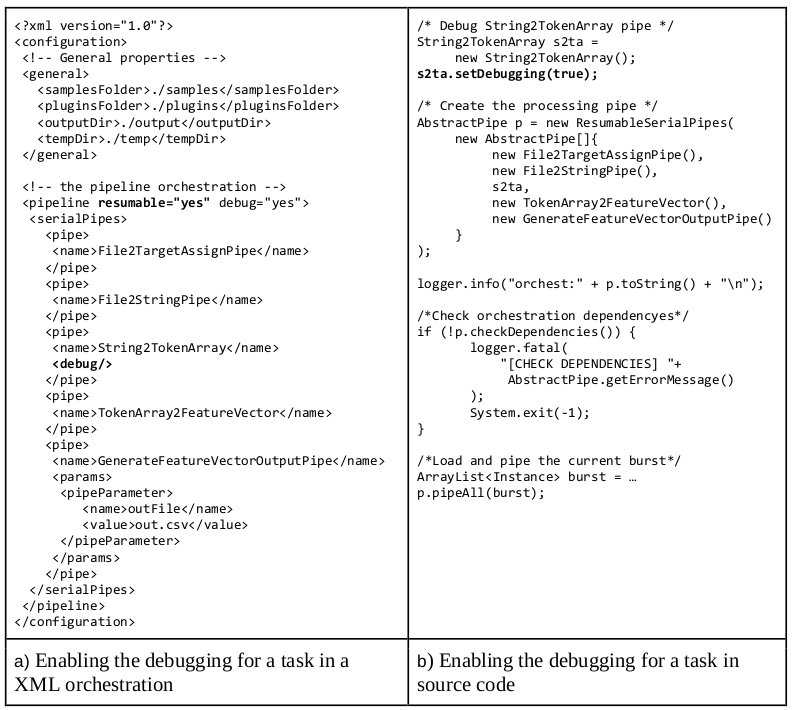 As we can see from Figure 4, the orchestrations defined in both columns are exactly the same. In the case of using the XML to define the orchestration, the task (pipe) that is being debugged should include a debug tag, and the entire pipeline should be executed in resumable mode (resumable=”yes”). Additionally, for source code orchestrations, the debug mode implies the use of ResumableSerialPipes and ResumableParallelPipes classes.

A javax/swing GUI to build a pipe-based task.

The GUI is launched when using gui as the first parameter for the execution of the main class org.bdp4j.Main and allows visually defining, executing and saving a pipeline orchestration. Use java -jar target/bdp4j-2.0.0-SNAPSHOT.jar gui.

Add the following repositories to your POM file:

Add the following dependency to your project:

In the repository https://github.com/sing-group/bdp4j_sample an example of use can be found to process SMS messages from http://www.esp.uem.es/jmgomez/smsspamcorpus/ a make a simple Weka 10-fold crosvalidation experiment. It is very simple but you can find in the example several pipes of different pipes working together.

This project has been conceived and developed by SING research group. The development team is composed by:

BDP4j implements a pipeline framework to allow definining project pipelines from XML. The main goal of the pipelines of this application is to transform imput data received from multiple sources into fully qualified datasets to be used with Machine Learning.

You should have received a copy of the GNU General Public License along with this program. If not, see https://www.gnu.org/licenses/.