Spring’s journey on Data Integration started with Spring Integration. With its programming model, it provided a consistent developer experience to build applications that can embrace Enterprise Integration Patterns to connect with external systems such as, databases, message brokers, and among others.

Fast forward to the cloud-era, where microservices have become prominent in the enterprise setting. Spring Boot transformed the way how developers built Applications. With Spring’s programming model and the runtime responsibilities handled by Spring Boot, it became seamless to develop stand-alone, production-grade Spring-based microservices.

To extend this to Data Integration workloads, Spring Integration and Spring Boot were put together into a new project. Spring Cloud Stream was born.

With Spring Cloud Stream, developers can:

You can try Spring Cloud Stream in less then 5 min even before you jump into any details by following this three-step guide.

We show you how to create a Spring Cloud Stream application that receives messages coming from the messaging middleware of your choice (more on this later) and logs received messages to the console. We call it LoggingConsumer. While not very practical, it provides a good introduction to some of the main concepts and abstractions, making it easier to digest the rest of this user guide.

The three steps are as follows:

To get started, visit the Spring Initializr. From there, you can generate our LoggingConsumer application. To do so: 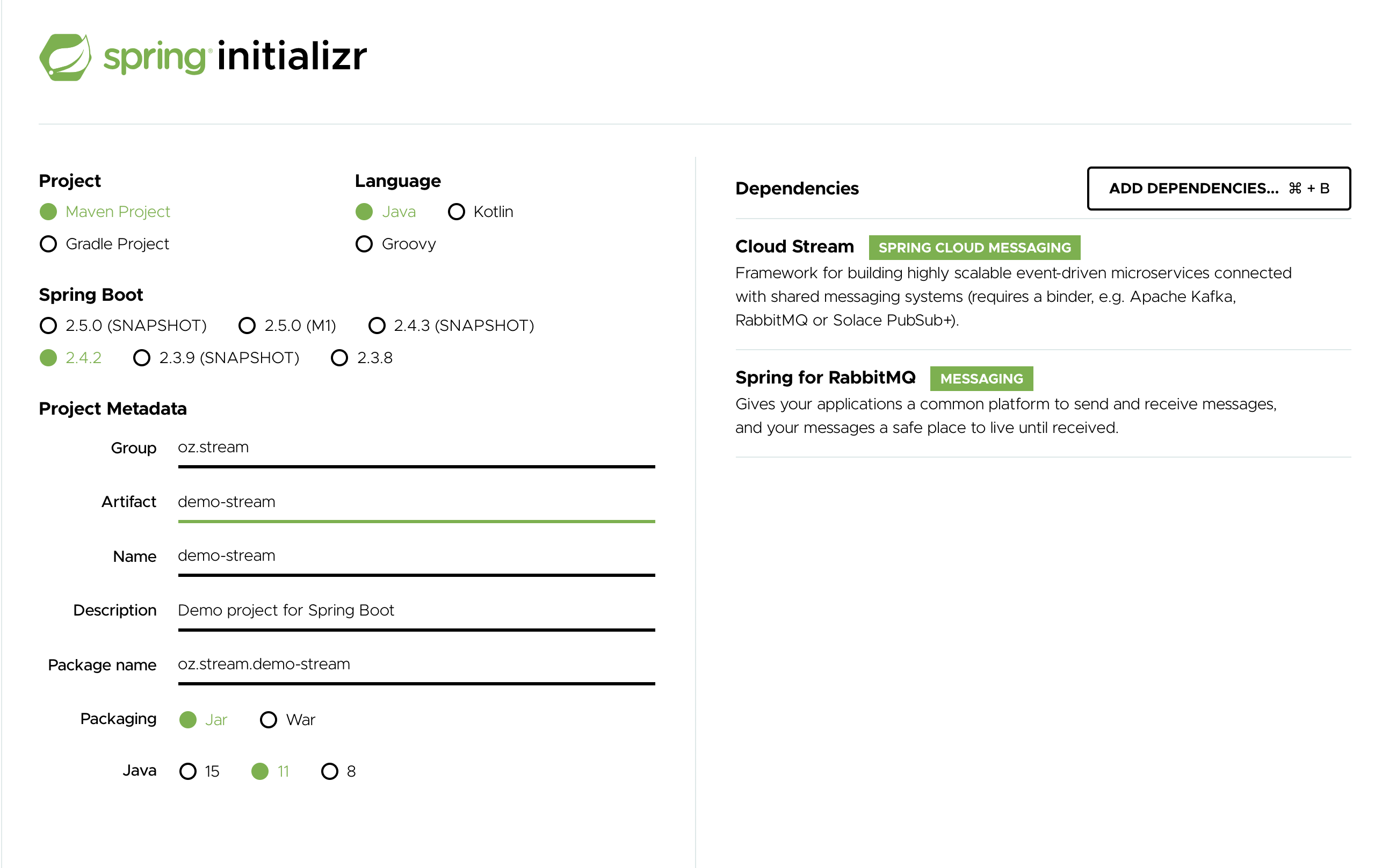 Importing the Project into Your IDE

Now you can import the project into your IDE. Keep in mind that, depending on the IDE, you may need to follow a specific import procedure. For example, depending on how the project was generated (Maven or Gradle), you may need to follow specific import procedure (for example, in Eclipse or STS, you need to use File → Import → Maven → Existing Maven Project).

Once imported, the project must have no errors of any kind. Also, src/main/java should contain com.example.loggingconsumer.LoggingConsumerApplication.

Technically, at this point, you can run the application’s main class. It is already a valid Spring Boot application. However, it does not do anything, so we want to add some code.

Modify the com.example.loggingconsumer.LoggingConsumerApplication class to look as follows:

As you can see from the preceding listing:

Doing so also lets you see one of the core features of the framework: It tries to automatically convert incoming message payloads to type Person.

You now have a fully functional Spring Cloud Stream application that does listens for messages. From here, for simplicity, we assume you selected RabbitMQ in step one. Assuming you have RabbitMQ installed and running, you can start the application by running its main method in your IDE.

You should see following output:

Go to the RabbitMQ management console or any other RabbitMQ client and send a message to input.anonymous.CbMIwdkJSBO1ZoPDOtHtCg. The anonymous.CbMIwdkJSBO1ZoPDOtHtCg part represents the group name and is generated, so it is bound to be different in your environment. For something more predictable, you can use an explicit group name by setting spring.cloud.stream.bindings.input.group=hello (or whatever name you like).

The contents of the message should be a JSON representation of the Person class, as follows:

Then, in your console, you should see:

You can also build and package your application into a boot jar (by using ./mvnw clean install) and run the built JAR by using the java -jar command.

Now you have a working (albeit very basic) Spring Cloud Stream application.

To build the source you will need to install JDK 1.8.

The build uses the Maven wrapper so you don’t have to install a specific version of Maven. To enable the tests for Redis, Rabbit, and Kafka bindings you should have those servers running before building. See below for more information on running the servers.

The main build command is

You can also add '-DskipTests' if you like, to avoid running the tests.

The projects that require middleware generally include a docker-compose.yml, so consider using Docker Compose to run the middeware servers in Docker containers. See the README in the scripts demo repository for specific instructions about the common cases of mongo, rabbit and redis.

There is a "full" profile that will generate documentation.

Working with the code

If you don’t have an IDE preference we would recommend that you use Spring Tools Suite or Eclipse when working with the code. We use the m2eclipe eclipse plugin for maven support. Other IDEs and tools should also work without issue.

Importing into eclipse with m2eclipse

We recommend the m2eclipe eclipse plugin when working with eclipse. If you don’t already have m2eclipse installed it is available from the "eclipse marketplace".

Unfortunately m2e does not yet support Maven 3.3, so once the projects are imported into Eclipse you will also need to tell m2eclipse to use the .settings.xml file for the projects. If you do not do this you may see many different errors related to the POMs in the projects. Open your Eclipse preferences, expand the Maven preferences, and select User Settings. In the User Settings field click Browse and navigate to the Spring Cloud project you imported selecting the .settings.xml file in that project. Click Apply and then OK to save the preference changes.

Importing into eclipse without m2eclipse

If you prefer not to use m2eclipse you can generate eclipse project metadata using the following command:

The generated eclipse projects can be imported by selecting import existing projects from the file menu.

Spring Cloud is released under the non-restrictive Apache 2.0 license, and follows a very standard Github development process, using Github tracker for issues and merging pull requests into master. If you want to contribute even something trivial please do not hesitate, but follow the guidelines below.

None of these is essential for a pull request, but they will all help. They can also be added after the original pull request but before a merge.