This is my port of Quake II for iOS, running in modern resolutions including the full width of the iPhone X. I have also made a target and version for tvOS to run on Apple TV.

This commit does not need any placeholder resources as it is not an update of an existing id Software port.

You will need to provide your own copies of the baseq2, xatrix and rogue directory from an existing instalation of Quake II. The latter two directories are only needed if you want to run the expansions. You can grab the whole thing with expansions on GOG or Steam. The music directory should contain the music in .ogg format. The GOG version comes with this, I'm not sure about the Steam versions. 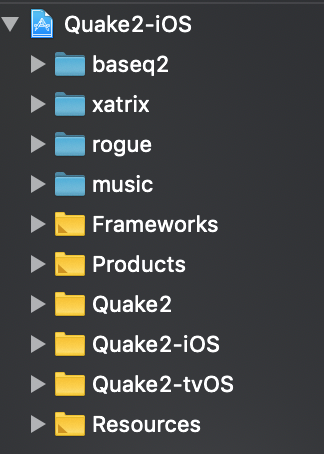 You can read a lengthy blog article on how I did all this here.

This port was based on Yamagi Quake II and uses SDL for iOS. I also referenced to this fork for Android from Emile Belanger for guidance on OpenGL ES issues. On-screen joystick code came from this repo by Brad Howe. Quake font DpQuake by Dead Pete available here. I also studied the iOS port of Hedgewars for information on how to use UIKit alongside SDL.

Video of Quake II running on an iPhone X

Video of Quake II running on an Apple TV