Explore with the International Space Station

This live data visualization was done at the course “Input Output - Introduction to process-oriented design” supervised by Fabian Morón Zirfas.

This project based itself on the statement:

The ISS travels fast around the globe, visiting numerous countries more often than you will never be able to.

The result is a web experiment offering the possibility to:

Follow the ISS and learn about the countries it flies over.

This web app shows the ISS at its live position mapped on earth. When the iss flies over a country:

This allows the user to travel and explore countries side by side with the ISS.

The following (initially planned) feature and information-display could not be implemented yet: – Showing the Next overflight that will happen over the country. – Implementing a pause feature that would allow the user to stay on the country and let the ISS fly further and then catch it up later on.

As additional fancy feature, the color of the links and borders are country-specific as they are based on the flag color.

This project contains client and server side rendering:

See it in movement 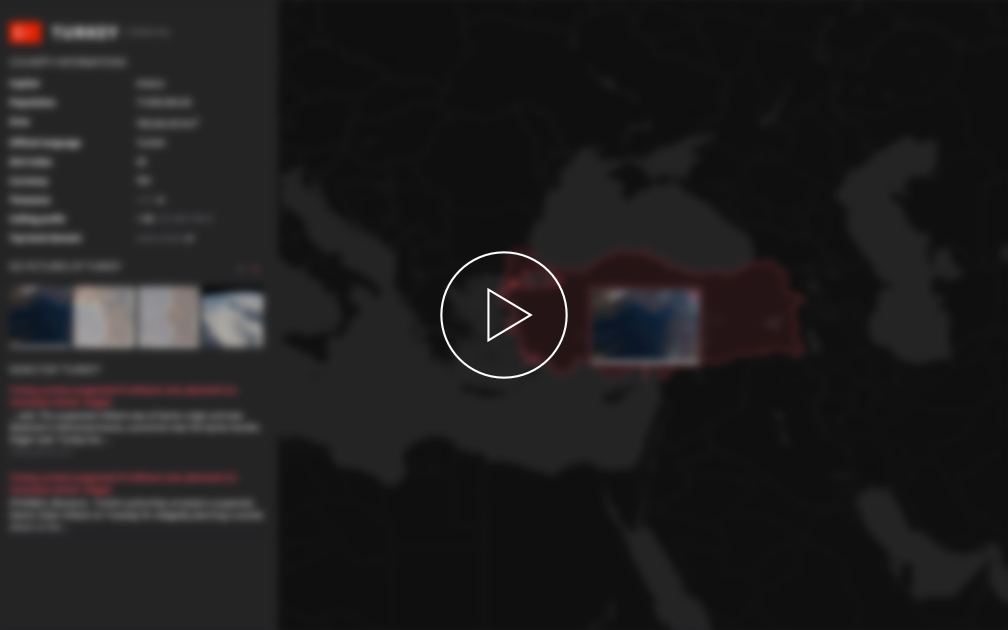 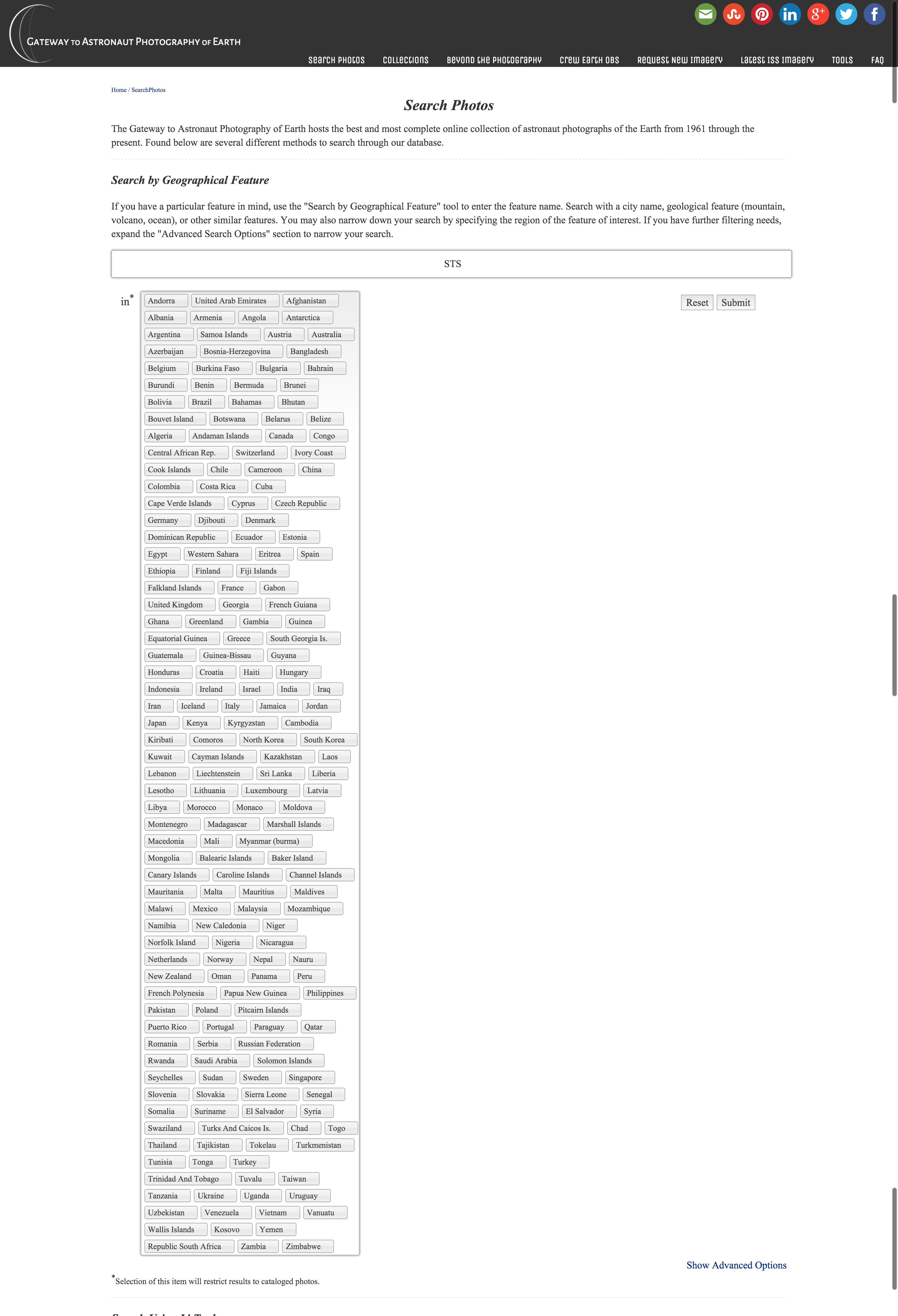 To find all images concerning countries all around the world, I had to manually include all of the in the search field of the [_Gateway to Astronaut Photography of Earth_](http://eol.jsc.nasa.gov/) and then import the results with [import.io](https://www.import.io/) 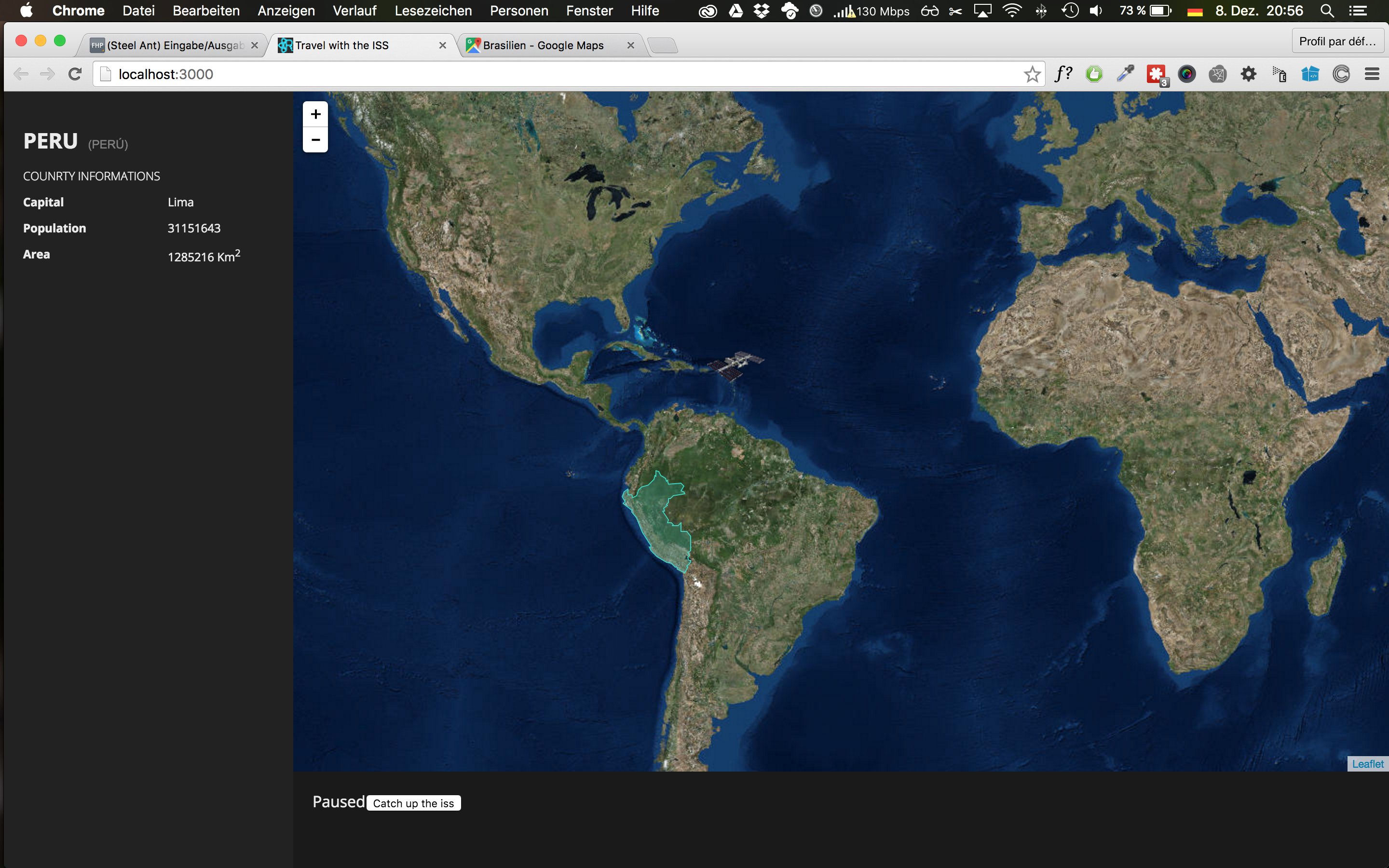 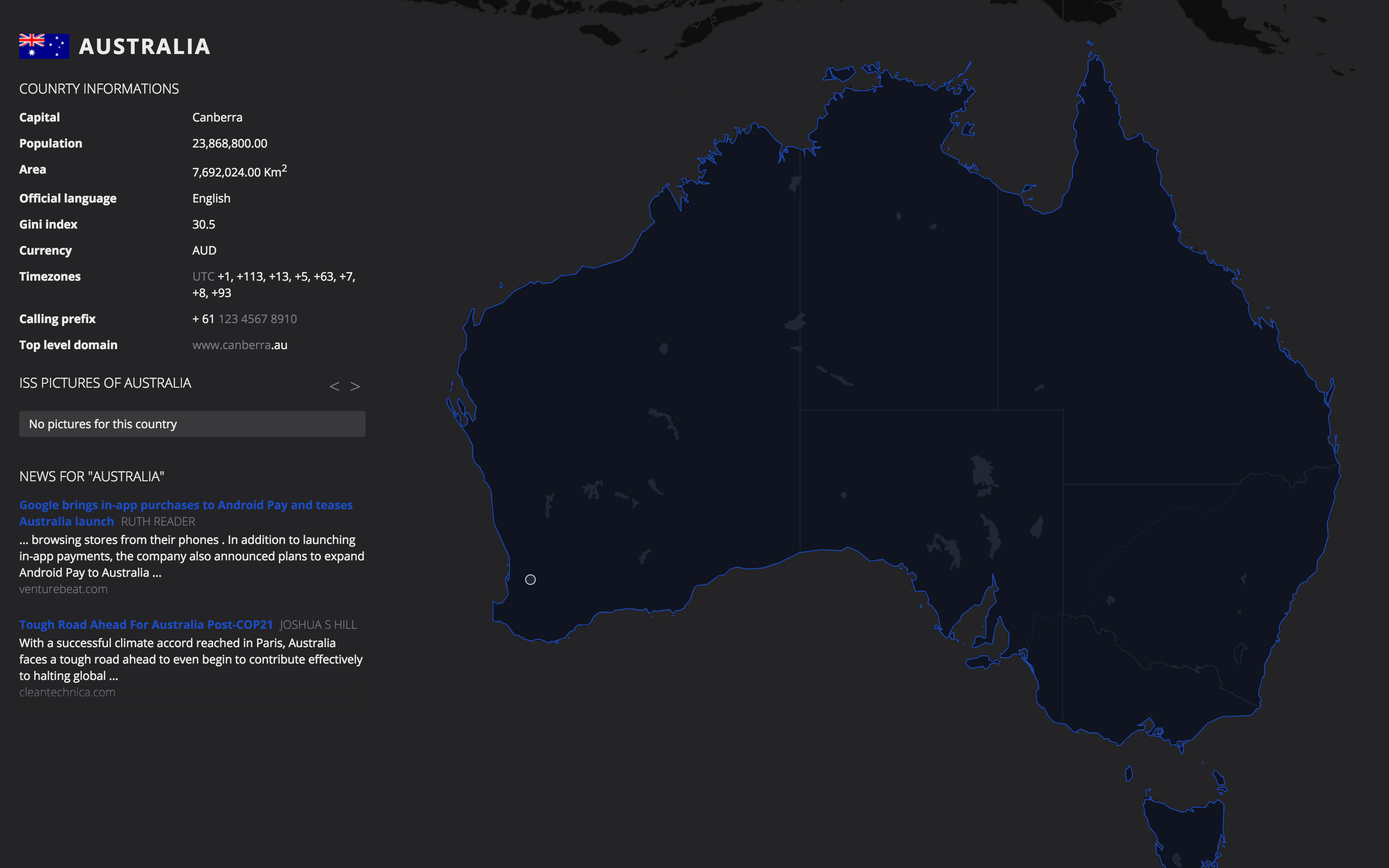 A view of Australia (I.e. There's no pictures available for this country) 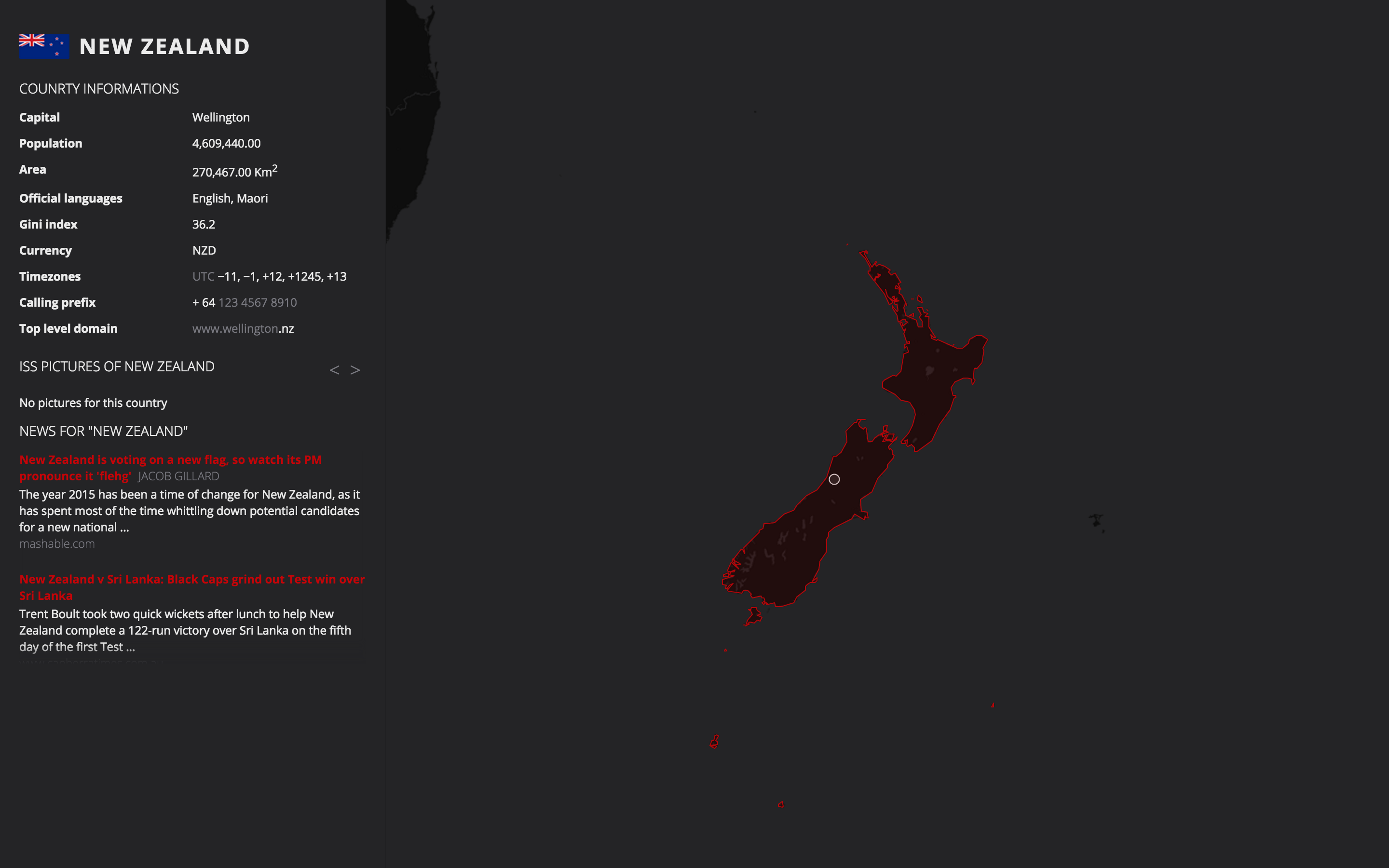 A view of New Zealand (As we see, the links and borders are always different, picking a vibrant color of the flag for it) 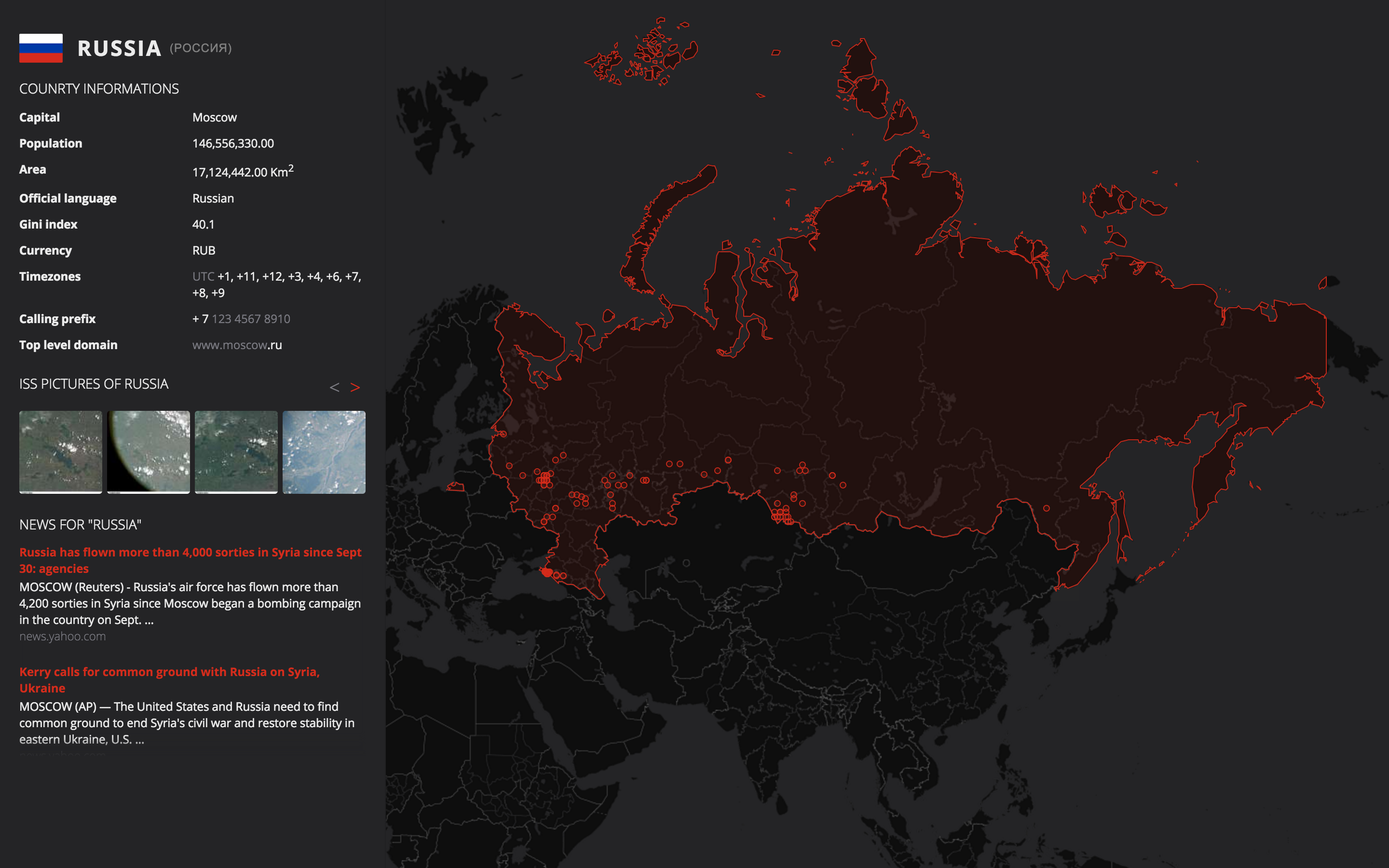 A view of Russia, one of the most photographed country 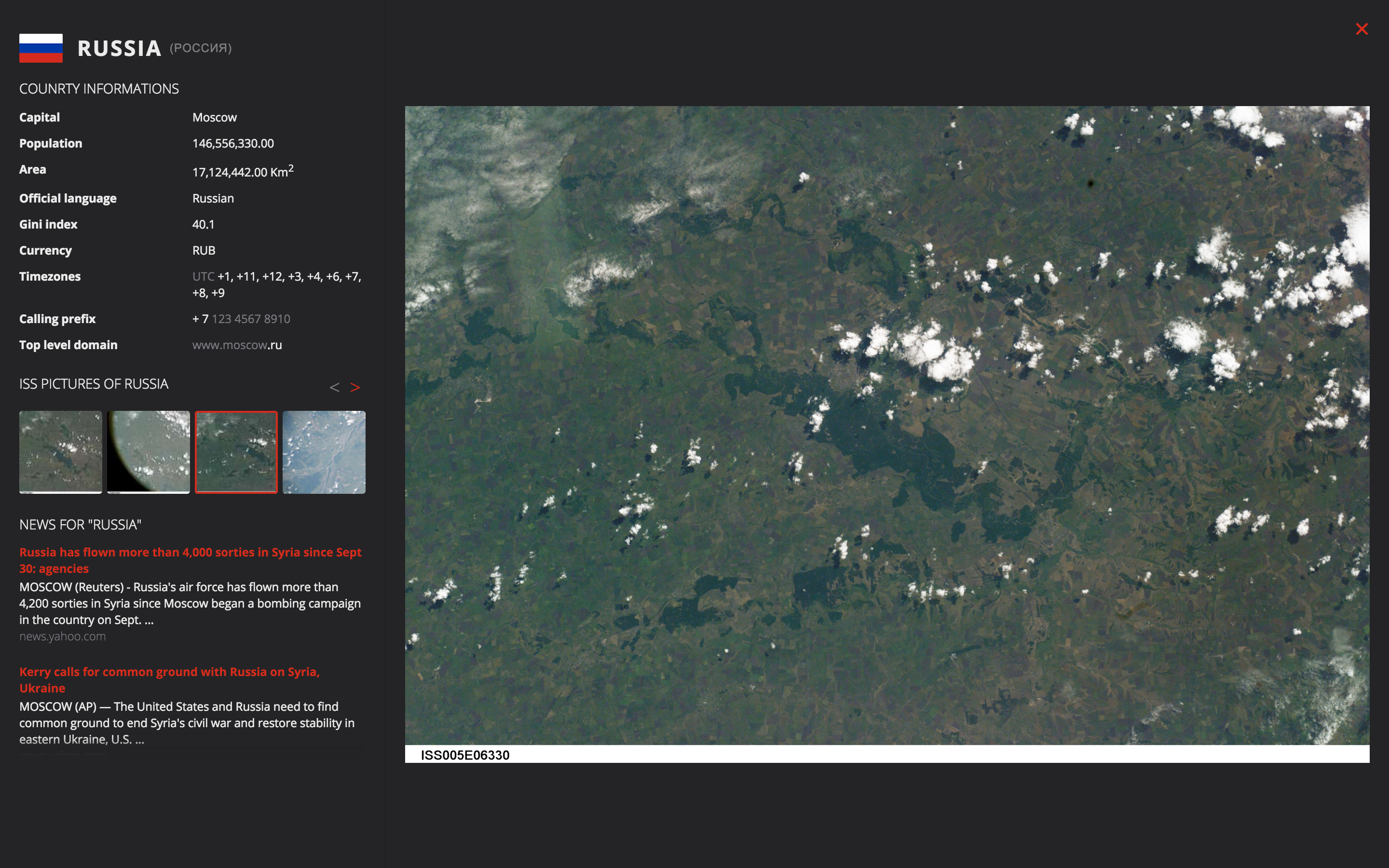 Open the slideshow to look at the pictures in large size 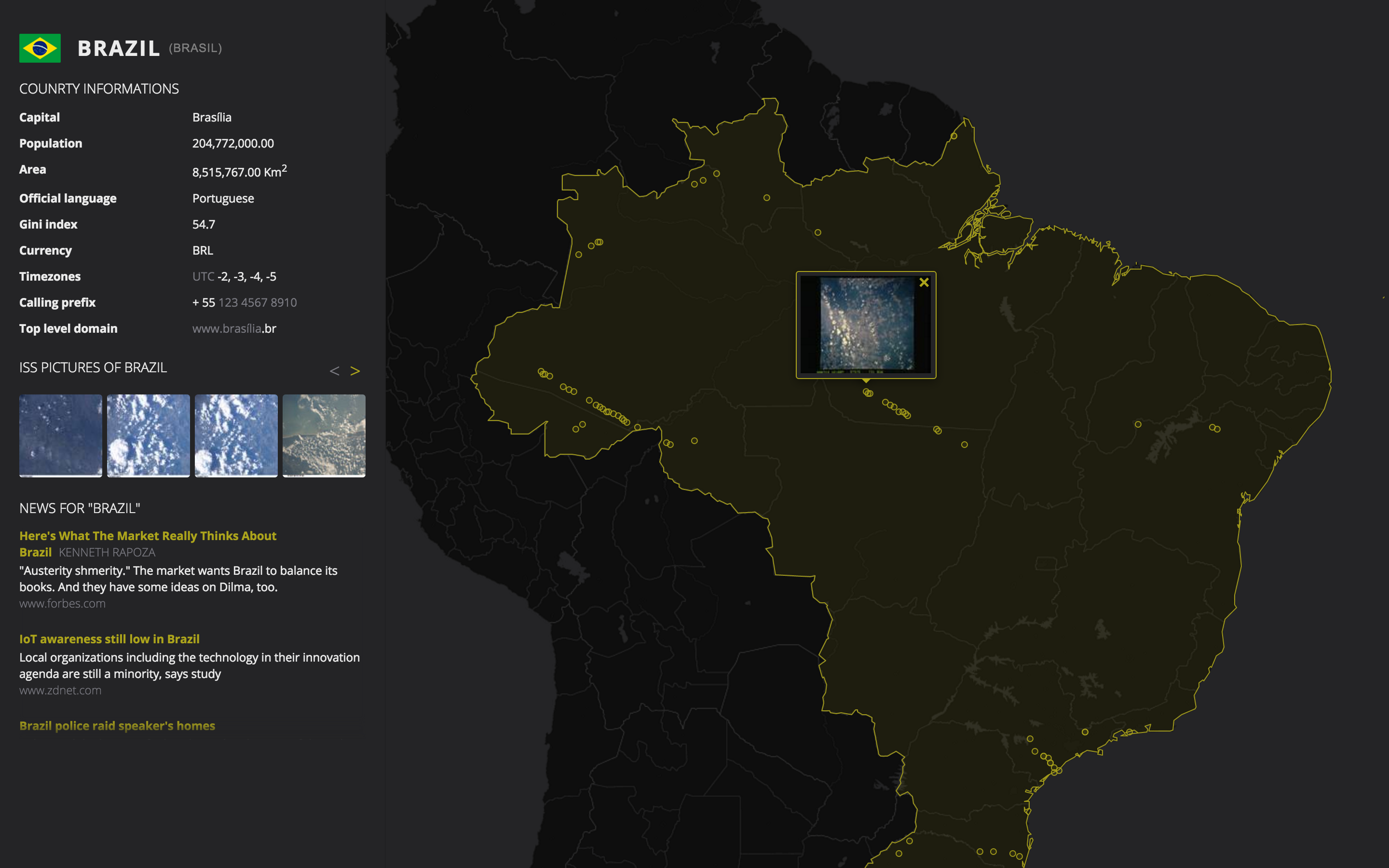 Many time lapses were taken from Brazil 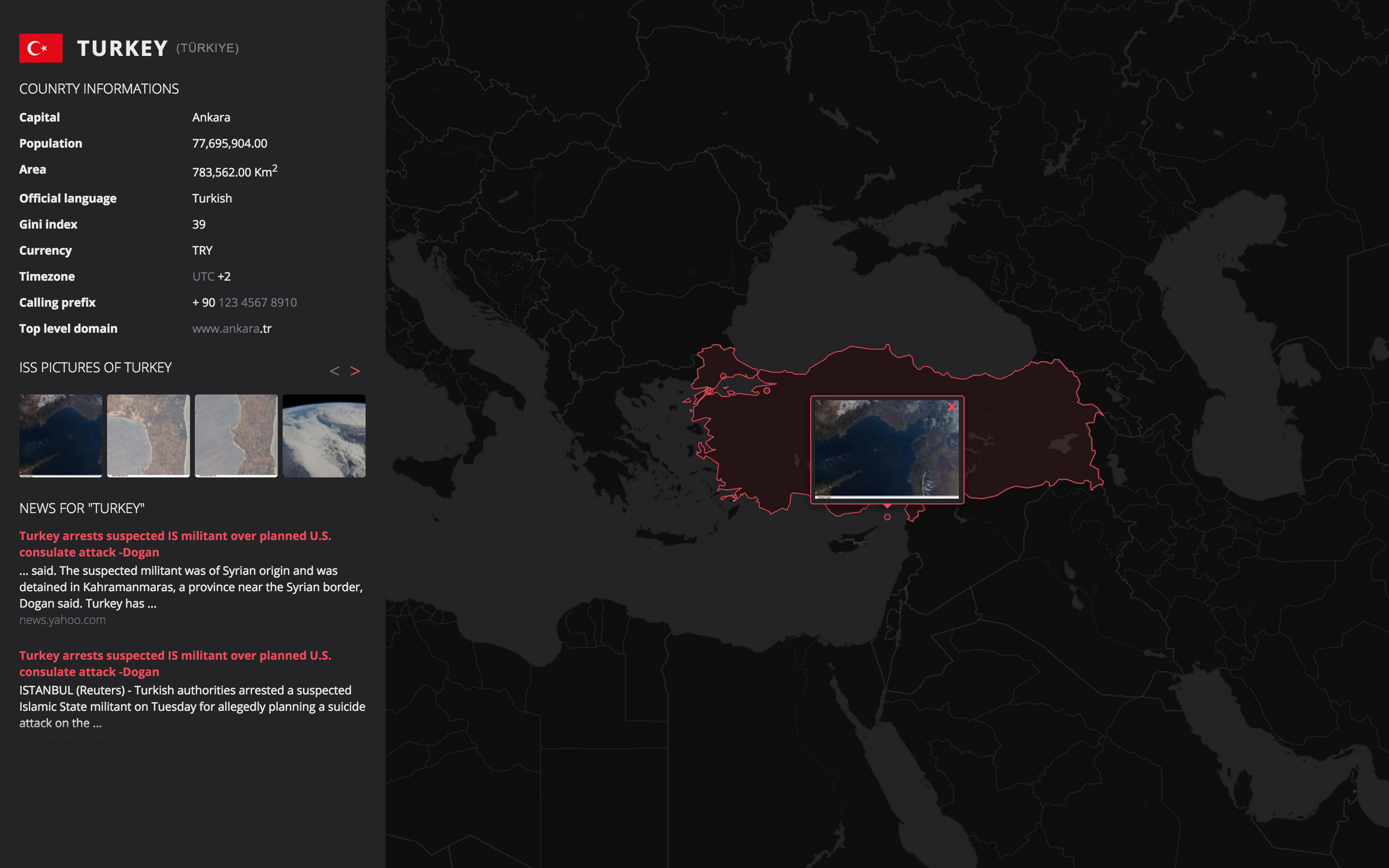 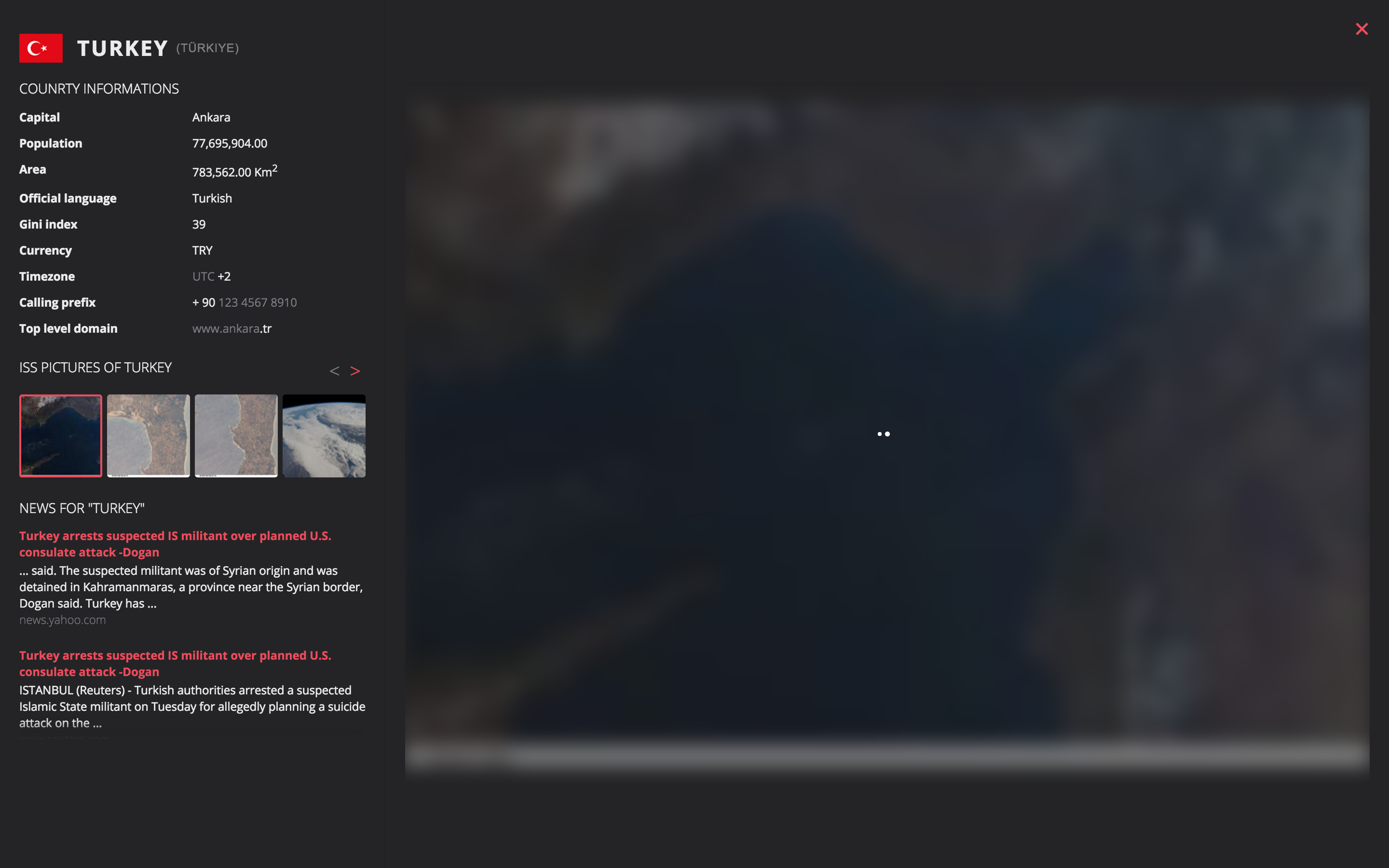 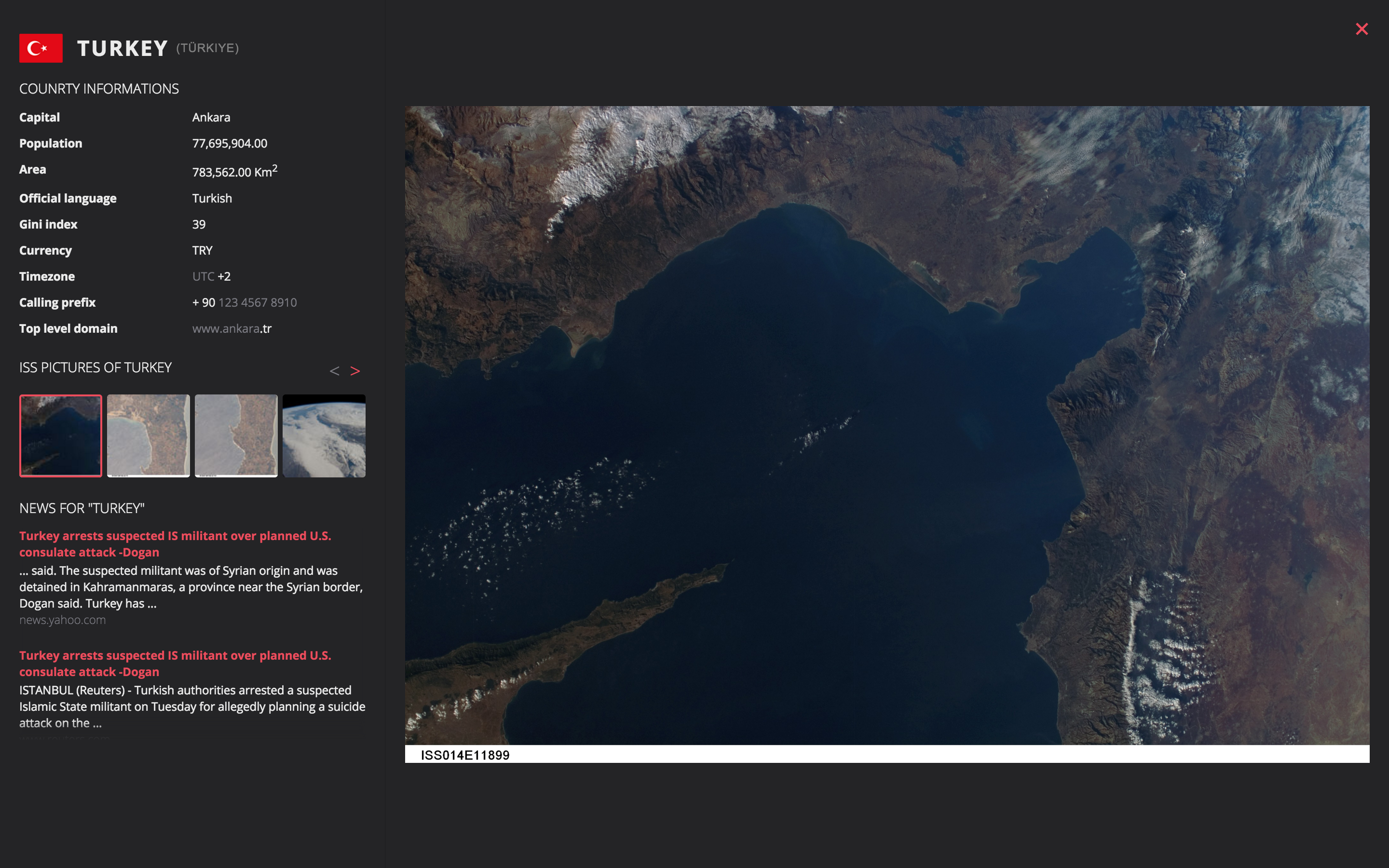 Some pictures are really impressive

getIssCountryCode makes a request to the Open notify API first, and then requests the Geonames API to map the ISS position to the country it belongs to. It retrieves the latitude, longitude and the alpha code of the country.

getCountryInfo is the most complex call as it combines many sources of information. It requires an alpha code as unique argument. The call processes the following filtering, data gathering and formatting operations:

getIssCountry first calls getIssCountryCode and then uses the alpha code response to request getCountryInfo. It is the most complete call. It retrieves a full response with all informations available, without needing to know the actual country code or position.