Implementation for <Decoupled Networks> in CVPR'18.

Decoupled Networks is released under the MIT License (refer to the LICENSE file for details).

Inner product-based convolution has been a central component of convolutional neural networks (CNNs) and the key to learning visual representations. Inspired by the observation that CNN-learned features are naturally decoupled with the norm of features corresponding to the intra-class variation and the angle corresponding to the semantic difference, we propose a generic decoupled learning framework which models the intra-class variation and semantic difference independently.

The latest version of our paper is available at arXiv and here. Our work is largely inspired and motivated by the observation that the CNN-learned features are naturally decoupled, as shown as follows. As illustrated as follows, the central idea of decoupled networks is the decoupled convolution, which is used to replace all the original convolution operators. The following is a short video introduction by Zhen Liu. 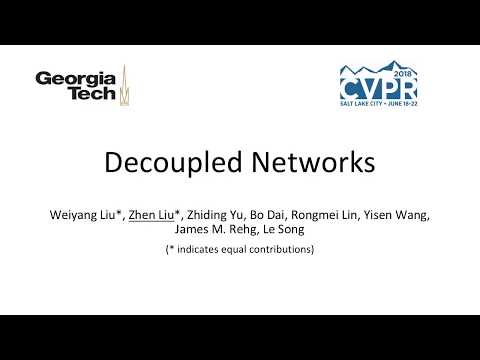 If you find our work useful in your research, please consider to cite:

Implementation for <Decoupled Networks> in CVPR'18.