Python and Common Lisp code for generating the Higher-order Network (HON) from data with higher-order dependencies.

Now parameter-free and magnitudes faster than the previous version!

Refer to the paper Detecting Anomalies in Sequential Data with Higher-order Networks.

Video demonstration -- check it out first!

Before trying out the code, please see demonstrations first at HigherOrderNetwork.com. A video demo will also be available soon on this website.

The Common Lisp implementation is the initial version used for the Science Advances experiments. It is faster than the Python implementation in most cases (can usually finish processing a network in a few seconds). For large or very complex data sets, it may require additional arguments for the compiler, since the default heap size in Common Lisp compilers are generally small.

The Python implementation should yield identical results to the Common Lisp version. While it might be slower to execute, it is more readable as it is almost a line-by-line conversion from the Pseudocode in the [Xu et al. 2016] paper. It can also scale up for big data without worrying about memory allocation, and can be easily parallelized.

Setting up the environment

Follow this tutorial to set up Emacs, SBCL, Quicklisp and SLIME.

Extracts higher and variable orders of dependencies from sequential data.

This corresponds to Algorithm 1 in paper.

Notice that the first element of every line is the ship's ID.

Python: can be any character except space.

Common Lisp: Non-integers can be used if function parse-lists-for-integer is removed from (main).

Other types of trajectories or sequential data can be used, such as a person's clickstream of websites, music playing history, sequences of check-ins, and so on.

To process diffusion procedures, treat the whole process as a combination of many SubSequences.

Variable orders of "rules" extracted from the sequential data. See rules-simulated-mesh-v100000-t100-mo4-kl.csv for example.

If you want to output the number of observations instead of the normalized probability:

Common Lisp: in function (add-to-rules), change the dictionary of distributions to the length of the source nodes's value in observations, and remove (clrhash observations) in (build-distributions)

Python: Parameters are at the beginning of the file main.py, with naming conventions slightly different than that of Common Lisp.

Common Lisp: Parameters are at the beginning of the file build-rules.lisp, starting with defparameter.

You may want to test the code with the synthetic trajectory first. Remember to use the file in ../data/

For each path, the rule extraction process attempts to increase the order until the maximum order is reached. The default value of 5 should be sufficient for most applications. Setting this value as 1 will yield a conventional first-order network. Discussion of this parameter (how it influences the accuracy of representation and the size of the network) is given in the supporting information of the paper.

Common Lisp: Setting this parameter too large may result in (1) long running time and/or (2) exhausting the heap and die silently (run sbcl with larger dynamic-space-size). Try increasing the value of this parameter progressively: if max-order is 5 but the rules extracted show at most 3rd order, then there is no need to further increase the max-order.

Observations that are less than min-support are discarded during preprocessing.

This parameter is useful for filtering out infrequent patterns that might be considered as higher-order rules. Setting a reasonable min-support can (1) considerably decrease the network size and the time needed for computation and (2) potentially improving representation accuracy by filtering out noise. Discussion of this parameter (how it influences the accuracy of representation and the size of the network) is given in the supporting information of the paper.

To skip this filter, set the value as 1.

Trajectories shorter than the given value are discarded during preprocessing. Useful for filtering out inactive individuals.

To skip this filter, set the value as 1.

Trajectories longer than the given value are discarded during preprocessing. Useful for filtering out abnormally long trajectories that dominate the network construction (generated by bots / faulty sensor data etc).

The last given steps in each trajectory are not used to for network construction (reserved for testing).

To use full trajectories, set this value as 0.

Exclude certain locations that want to be excluded from trajectories. Useful for preprocessing. Default not used. To enable this filter, change the value from nil to t and change the list in function (filter-by-bots).

Python: not implemented. KL divergence is used by default, and uses the auto-adapting threshold in the [Xu et al. 2016] paper.

The method used for comparing different probability distributions of choosing the next step, when extending the knowledge of previous locations. Default is KL-divergence, which is self-adaptable to paths of variable support / orders.

Given the higher-order rules extracted in the last step, convert them to a network representation.

This corresponds to Algorithm 2 in paper.

The file containing rules produced by the last step.

Default weight is the probability of a random walker going from [FromNode] to [ToNode]. If you want to output the number of observations instead of the normalized probability, follow previous instructions.

All nodes (first-order and higher-order) starting with the same [CurrNode]| represent the same physical location.

This representation (as comma deliminated network edges file) is directly compatible with the conventional network representation and analysis tools. The only difference with the conventional network is edge labels. The csv file can be fed into many other network analysis tools (such as Gephi, NetworkX and so on) that are originally designed for first-order networks.

Python: No need to set the parameters. Common Lisp: Parameters are at the beginning of the file build-network.lisp, starting with defparameter.

Use the same value as in build-rules.lisp

The script ./applications/synthesize-trace-mesh.py (run with python or python3) synthesizes trajectories of vessels going certain steps on a 10x10 grid (with wrapping). See details in the methods part of the paper.

Normally a vessel will go either up/down/left/right with the same probability (see function NextStep), (vessel movements are generated almost randomly with the following exceptions).

It is not feasible to add rules beyond third order using the same setting in paper, because movements matching multiple previous steps will unlikely happen. However you can use a different setting to generate even higher orders.

Data generated using the aforementioned script is provided as traces-simulated-mesh-v100000-t100-mo4.csv

Use HON with a default setting of MaxOrder = 5, MinSupport = 5. It should be able to detect all 30 of these rules of various orders, while not detect "false" dependencies beyond the 4th order. The result is provided as rules-simulated-mesh-v100000-t100-mo5-ms5-t01.csv

note that for illustration here (since we are not going to build a network now), in this file when higher order rules are detected, corresponding lower order rules are not added recursively. If all preceding rules are added, following the algorithm in the paper, the expected result should be rules-simulated-mesh-v100000-t100-mo4-kl.csv.

The whole time to process these 10,000,000 movements should be under 5 seconds (single thread, excluding disk IO time). Can be improved by using parallelization (needs compiler that enables parallelization), see comments in code for details.

Now HON can be used as if it is a first-order network, for applications such as PageRank, clustering and others.

We provide the code for post-processing PageRank values, to illustrate how such post-processing of HON analysis results can be written in a few lines of code. The code is "./applications/hon-pagerank.py", written in Python, requires the networkx package for PageRank.

A: The whole process should typically finish within 1 minute and in most cases no more than 10 seconds. If no output is produced in a long time, check CPU utilization to see if the program is still running. If you use Emacs+SLIME, check the inferior-lisp buffer to see if heap has been exhausted and the interpreter has failed silently. Apply the tip above to increase the heap size.

Q: How to visualize HON?

A: We are currently working on a visualization and interactive exploration software package which will be available for download soon. Please check back later at HigherOrderNetwork.com. 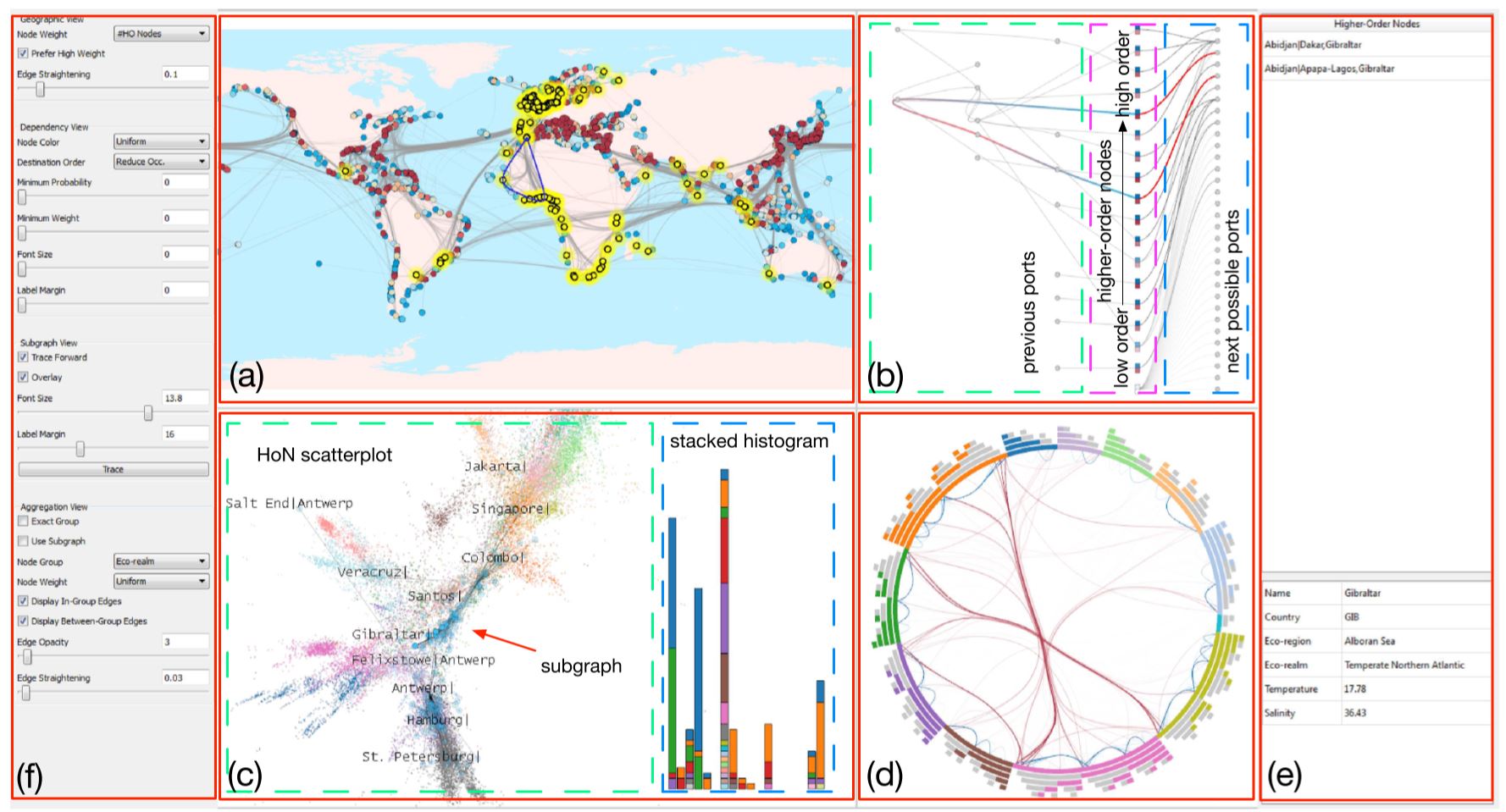 Before that, one can simply use the output csv file of this code for existing software packages such as Gephi.