It's your favorite JavaScript library, only faster
Find file 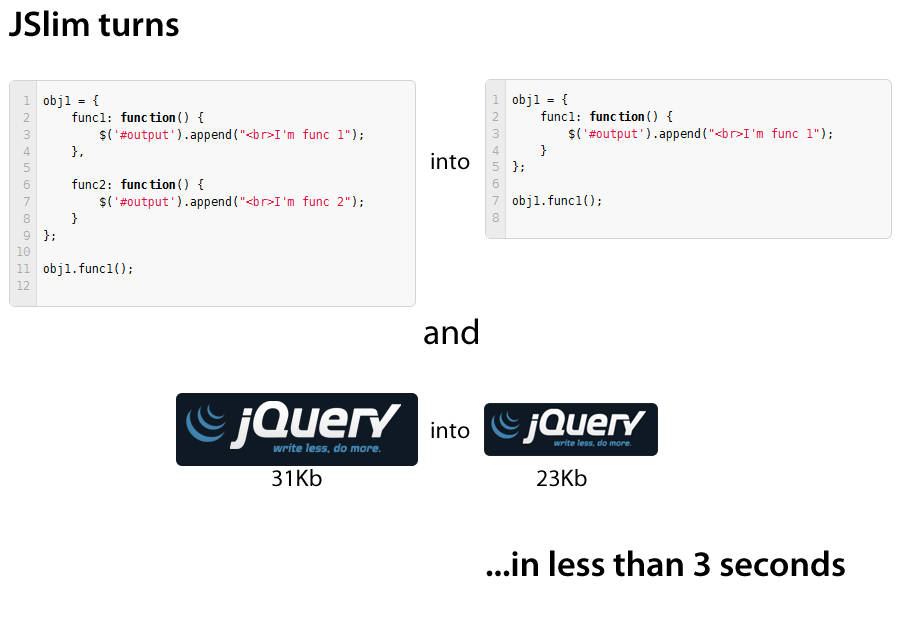 JSlim is a JavaScript optimizer based on the Google Closure Compiler, but instead of optimizing your code it removes unused code. Some people call this type of application a tree shaker because it shakes unused code out of your tree.

JSlim is your favorite JavaScript library, only faster

This project builds with Gradle. Make sure to download 3.0.0 or later. Build the application by running gradle in the project root directory.

This project builds and runs on Windows, Mac, and Linux.

This repository includes a number of sample application you can use to try JSlim with. The easiest place to start is with a simple JQuery/underscore.js. You can slim it like this:

Once that command is done you can open the index.html file in your favorite browser and watch it run just the parts of JQuery and Underscore the page really needs. The page shows one of the basic underscore.js examples and looks like this:

This process will remove 163 out of 410 named functions (39.7 percent) and reduce the total size of the library files by 28 percent.

JavaScript organizes blocks of code into functions. Some functions are named and stand alone like this:

Other functions are organized into JavaScript closures like this:

JSlim can track most function calls, but there are some where it can't follow what you're calling. The easiest way to break JSlim is using the eval function like this:

JSlim can't follow this function call to myFunction since it is part of an evaluated string. In this case you must reference myFunction as an external reference. Many JavaScript library do dynamic loading like this, especially for effects.

Can I see a simple example?

Let's say you write some JavaScript which looks like this:

JSlim looks at this code and determines that f1 is called, but f2 isn't. In this case it will remove f2 and make the code smaller and faster. If you start using f2 just run JSlim again and it will create a new library with it included.

How much does JSlim save?

JSlim works very differently depending on the library it's slimming down. The more a library uses named functions with simple dependencies and clean hierarchy the more we can slim it down.

JSlim doesn't work well with libraries using mostly anonymous functions and other constructs which are difficult to track down. JSlim is also strictly a static code analysis tool which means it doesn't run any JavaScript code.

...JSlim will keep the now function and the noop function since it can't tell what the value of flag might be.

JSlim is best with a simple JQuery/underscore.js application where it reduces the total size of the libraries by 28% above using the Closure compiler and GZIPing. Most libraries are reduced by 10-20 percent, but the savings in total size is only part of the story.

JSlim focuses on removing dead code from third-party libraries which aren't compatible with ADVANCED_OPTIMIZATIONS. It also dependencies dynamically instead of requiring an externs file.

JSlim is at release 0.1. It's pretty stable, but hasn't had a large amount of testing yet. I've tested JSlim with the following libraries:

JSlim should work with any library. It can also work directly with your JavaScript. Write as many functions as you want and JSlim will prune out the unused ones so your code stays small and your site stays fast.

In the short term I'm focusing on improvements to the core compilation process. I want to improve the algorithm and remove more of the unused functions. This especially means focusing on anonymous functions.

I also want to write JSlim plugins for Apache Ant and Apache Maven. That way you can run JSlim as part of your build. I'm still working on it.

Why does JSlim build with Gradle?

JSlim could build with Ant or Maven, but I wanted a new project to try out Gradle. I stuck with Gradle because it's awesome. Check out my gradle.build file and see how easy it is to make a complex build in Gradle.

I'm happy for any feedback you have on this project. It is still in the early stages and I'm still working out the best heuristics. JavaScript is a very weakly typed language and optimizing it is tricky.

If you have time to try it out or any suggestions for how I can make JSlim better please send me an email.

This project is available under the Apache License, Version 2.0.