The following comparison demonstrates the improvement in image quality. 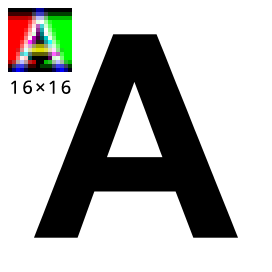 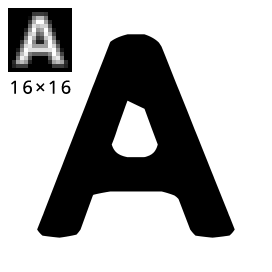 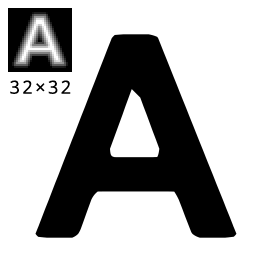 The project can be used either as a library or as a console program. It is divided into two parts, core and extensions. The core module has no dependencies and only uses bare C++. It contains all key data structures and algorithms, which can be accessed through the msdfgen.h header. Extensions contain utilities for loading fonts and SVG files, as well as saving PNG images. Those are exposed by the msdfgen-ext.h header. This module uses FreeType, TinyXML2, and LodePNG.

Additionally, there is the main.cpp, which wraps the functionality into a comprehensive standalone console program. To start using the program immediately, there is a Windows binary available for download in the "Releases" section. To build the project, you may use the included Visual Studio solution or CMake script.

The standalone program is executed as

where only the input specification is required.

Mode can be one of:

The input can be specified as one of:

The complete list of available options can be printed with -help. Some of the important ones are:

will take the glyph capital M from the Arial Bold typeface, generate a 32×32 multi-channel distance field with a 4 pixels wide distance range, store it into msdf.png, and create a test render of the glyph as render.png.

Note: Do not use -autoframe to generate character maps! It is intended as a quick preview only.

If you choose to use this utility inside your own program, there are a few simple steps you need to perform in order to generate a distance field. Please note that all classes and functions are in the msdfgen namespace.

Using a multi-channel distance field generated by this program is similarly simple to how a monochrome distance field is used. The only additional operation is computing the median of the three channels inside the fragment shader, right after sampling the distance field. This signed distance value can then be used the same way as usual.

The following is an example GLSL fragment shader including anti-aliasing:

Note: This is an example shader only and probably is not optimal for your use case! Please do not blindly copy & paste.

The text shape description has the following syntax.

would represent a square with magenta and yellow edges,

is a teardrop shape formed by a single cubic Bézier curve.