I am no longer maintaining this project as there is a far better tool to do this now called Telagraf, which supports sending to InfluxDB and Graphite.

You can a blog post on how to set it up here: https://hodgkins.io/windows-metric-dashboards-with-influxdb-and-grafana

3. Make sure the files are un-blocked by right clicking on them and going to properties. 4. Modify the StatsToGraphiteConfig.xml configuration file. Instructions here. 5. Open PowerShell and ensure you set your Execution Policy to allow scripts be run. For example Set-ExecutionPolicy RemoteSigned.

The configuration file is fairly self-explanatory, but here is a description for each of the values.

This section lists the performance counters you want the machine to send to Graphite. You can get these from Performance Monitor (perfmon.exe) or by using the command typeperf -qx in a command prompt.

I have included some basic performance counters in the configuration file. Asterisks can be used as a wildcard.

Here are some other examples:

This section lists regex find and replace rules used to clean up the Windows performance counters before sending them on to Graphite. Most people will be able to leave this section alone as it configured using sensible defaults.

The script processes these in the order they appear in the configuration file. Order is important!

There are two methods for replacing metrics with custom names:

If you want to use the regex capture replace, I recommend doing this first, as it's easier to capture these sections before the metrics get cleaned.

This section lists names you want to filter out of the Performance Counter list. Filtering is useful when you want to use a wildcard in the performance counter, but want to exclude some of the returned counters. I have included isatap and teredo tunneling by default to filter out IPv6 interfaces. Remove all tags if you want no filtering.

This section allows you to configure the additional settings that will be used when running the Start-SQLStatsToGraphite command.

The next section allows you to configure a list of SQL servers and the queries that will be run against those servers. You can add as many queries or servers as required. The only constraint is that they all need to be able to run within the time given by the MetricSendIntervalSeconds configuration value.

The next part of the configuration allows you to add a list of the T-SQL queries that will be run against the SQL server.

There are a few important things to keep in mind when using this feature.

This section allows you to turn on or off Verbose output. This is useful when testing but is better left off when running as a service as you won't be able to see the output.

The following shows how to use the Start-StatsToGraphite, which will collect Windows performance counters and send them to Graphite.

You may need to run the PowerShell instance with Administrative rights depending on the performance counters you want to access. This is due to the scripts use of the Get-Counter CmdLet.

From the Get-Counter help page on TechNet:

The below image is what Start-StatsToGraphite like with VerboseOutput turned on in the XML configuration file looks like.

That is all there is to getting your Windows performance counters into Graphite.

The following shows how to use the Start-SQLStatsToGraphite, which will execute any SQL queries listed in the configuration file and send the result (which needs to be an integer) to Graphite.

The below image is what Start-SQLStatsToGraphite like with VerboseOutput turned on in the XML configuration file looks like.

This function requires the Microsoft SQL PowerShell Modules/SnapIns. The easiest way to get these is to download them from the SQL 2012 R2 SP1 Feature Pack. You will need to grab the following:

Installing as a Service

Once you have edited the configuration file and verified everything is functioning correctly by running either Start-StatsToGraphite or Start-SQLStatsToGraphite in an interactive PowerShell session, you might want to install one or both of these scripts as a service.

The easiest way to achieve this is using NSSM - the Non-Sucking Service Manager. 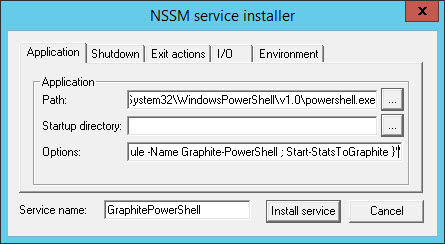 The below configurations will show how to run either Start-StatsToGraphite or Start-SQLStatsToGraphite as a service. If you want to run both on the same server, you will need to create two seperate services, one for each script.

Running Start-StatsToGraphite as a Service

The following configuration can be used to run Start-StatsToGraphite as a service.

Running Start-SQLStatsToGraphite as a Service

The following configuration can be used to run Start-SQLStatsToGraphite as a service.

If you want to remove a service, read the NSSM documentation http://nssm.cc/commands for instructions.

Installing as a Service Using PowerShell

There are several functions that are exposed by the module which are available to use in an ad-hoc manner.

For a list of functions in the module, run Get-Command -Module Graphite-PowerShell. For full help for these functions run Get-Help | <Function Name>