This functionality can be used to import in Blender most of shapefile feature type including geometry with z value. However multipatch feature are not supported. Attributes data can be used to define Z elevation values or Z extrusion values.

When importing into separate objects it's possible to define a field whose values will be used to name each features. Newly created objects are imported into a new Blender collection. 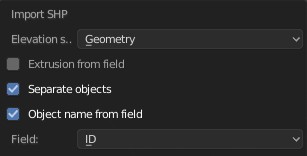 Importing all features into one unique mesh does not allows to handle attributes data, but it's the best approach for importing large shapefile. There is an option in BlenderGIS's preferences that allows merging automatically duplicate vertices while importing. This option is usefull to reduce the mesh size in memory when the imported features share lot of vertices.

Features elevation can be setup from various sources 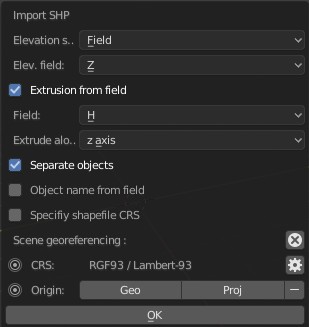 When importing a shapefile it's necessary to specify the projection of the file.

Once again use a GIS software to explore and manage your data (reprojection, clip ...) before trying to import them in Blender. Each contry have a set of commonly used projections, if you really don't know if the projection of your data is suitable for your location you can consider transforming them into the right UTM zone. However, this topic is out of scope of BlenderGIS wiki.

Most of shapefile define the CRS in a .prj file witch contains the definition of the projection in Well-know text (wkt) format. However, BlenderGIS store map projection as SRID unique identifier and unfortunately discover the right SRID from WKT definition is not an easy task. Futhermore, the prj file is optional and may be missing. That's why for now the user must explicit the input/file SRS.

Fortunately, BlenderGIS handle a list of predefinate CRS witch help to quickly specify the projection of your input data. 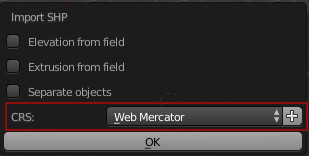 If the CRS of your input file is not in the list, you can quickly add a new one with + operator.

You can find more information on how to manage this list of predefinate CRS in geoscene addon documentation.

You must avoid as much as possible importing a shapefile stored as longitude/latitude in degrees otherwise you will lose data accuracy. One degree on the earth is equals to approx 111km so one meter is approx 0.00001 degrees but Blender works with coordinates as single precision (float32) and a single float value has actually about 7 significant digits of precision. You cannot expect an accuracy bellow 1 meter when working in decimal degrees because closest points will be rounded and merged into one. Futhermore, angulars units will be virtually unusable in Blender. In this case, you need to choose an appropriate map projection (in linear units) for your location and transform your data into this reference system.

Shapefile importer support minimal reprojection capabilities which can be usefull in some case. Please use this functionnaly with caution and full background knowledge, BlenderGIS can't do magic alignment for you...

Reprojection will be involved each time a shapefile must be transformed to match the scene CRS.

Georeferencing informations of the scene will be automatically initialized according to the first shapefile import. But, it's possible to define the scene CRS before importing any shapefile and thus ensure reprojection of each subsequent imports. To do this use the geoscene manager panel available in 3dview tool sheft.