The MRC lets you control 6 DOF/axis robotic arms using the g-code like MRIL language. The istructions can either be transferred directly to the controller using screen, or any other serial monitor, or with the help of a library, such as the MRCL (MicroPede Robot Control Library)

This project is work in progress. Feel free to fork, update and improve it

All configurations and settings are based on the robot model depiced below. 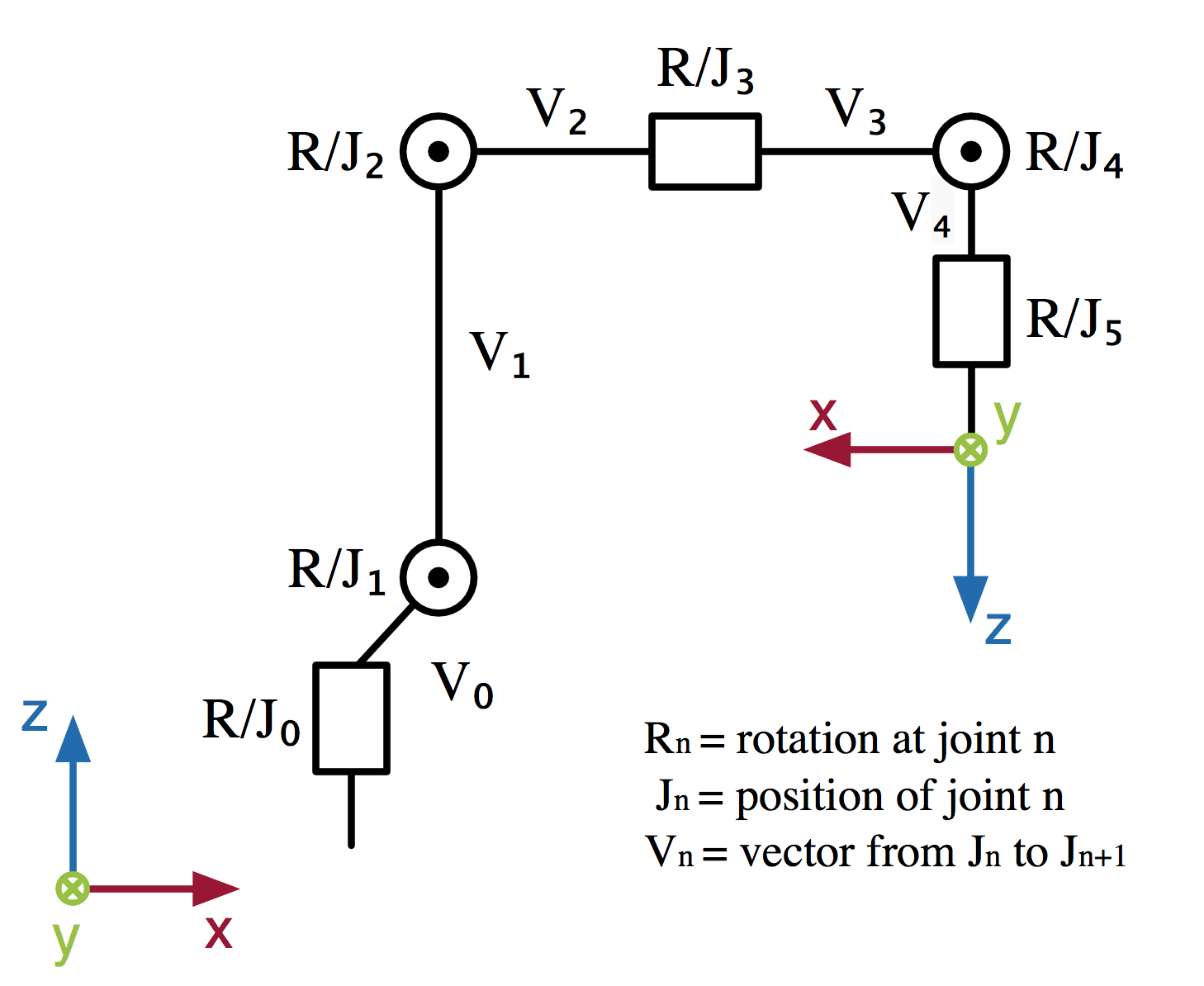 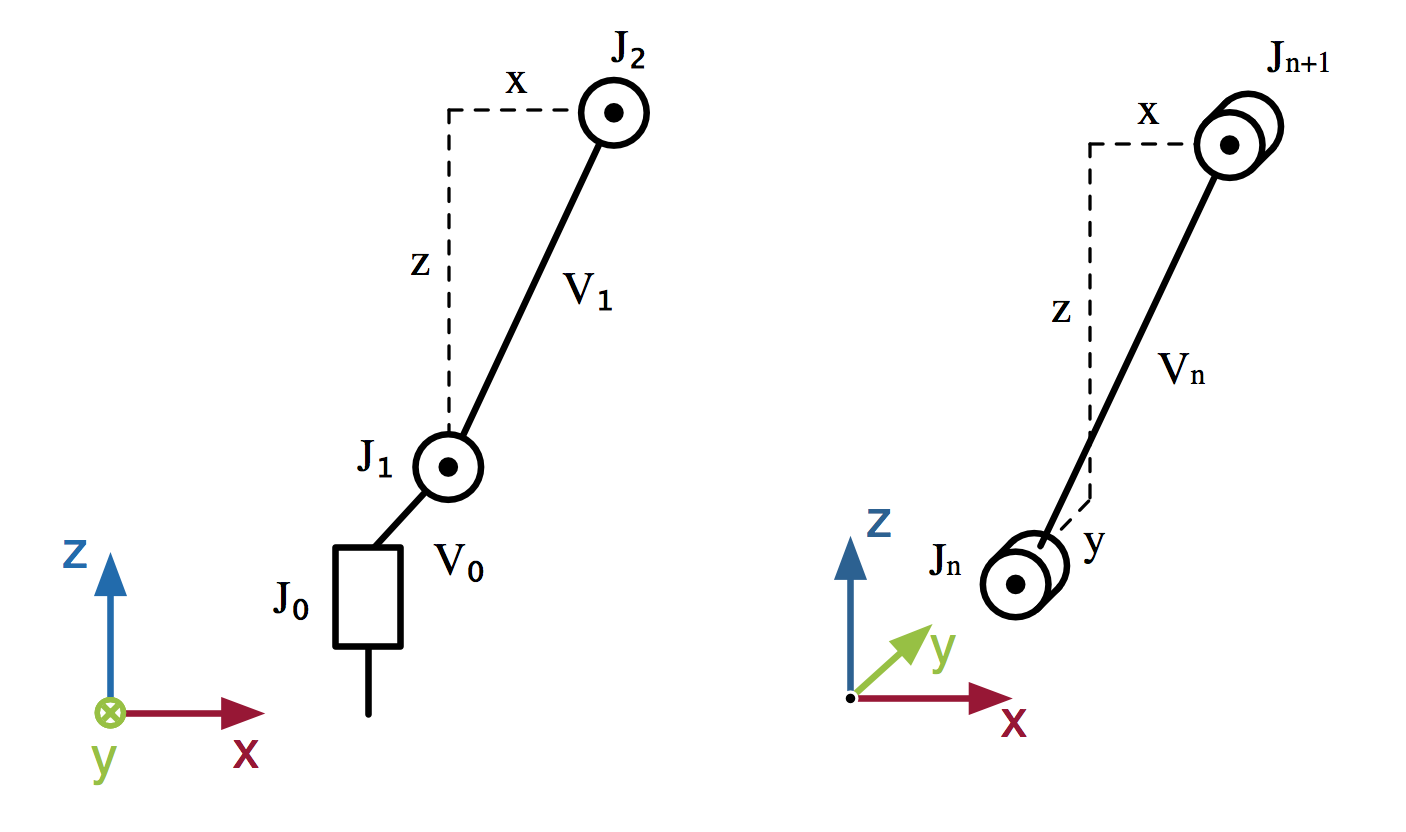 Set you microcontroller in the platformio.ini.

Uncomment #define EXAMPLES 1 in the main.cpp file to build the calibration example.

Upload the program to the microcontroller.

Change the configuration to match your robot (see section Configuration).

Optionally attach a 128x64 display to the pins defined in main.cpp

Comment #define EXAMPLES 1, then build and upload the project.

Use the MRCP/MRIL to control the robot.

Send a few commands via serial to check if everything is working. B should return the free buffer size (300).

This project was developed with the help of PlatformIO (PIO). PIO is an open source cross-platform build system and Atom based IDE. It is used to build and upload programs to a microcontroller. I highly recommend using the PIO IDE or at least the PIO build-system to upload the program to your Arduino/Teensy.

Most configuration is located in the config.h file.

Aspects that have to be configured:

The servos have to be calibrated to relate PWM pulses to physical robot positions. Therefore build and upload the /examples/CalibrateServos.h file. Open a serial monitor and connect to the microcontroller. Use the keys 0-9 to select a servo. Press n to move a servo without changing the config. w increments, s decrements the current value.

You basically alter the servo frequency to move the servos to certain positions and then relate those positions to physical angles. You can always press h to display all commands and explanations.

The MRC uses two types of angles - logical and physical angles. Logical joint angles are used internally by the robot controller and are the result of the IK calculation. The robot is therefore modeled as a series of joints and links. However, a real physical robot may use mechanical links to move some axis. Therefore moving R1 may also move R2, because of the kinematic linking.

To account for mechanical kinematics, the methods logicalToPhysicalAngles and physicalToLogicalAngles are used. On the robot depicted below, both motors for J1 and J2 are at the position of J1. A link is used to drive J2. Therefore moving only R1 also decreases the angle of J2. To not move J2, R2 has to move the same amount as R1.

For testing and mocking gMock/gTest is used. To run the tests /tests/test.h.

increase the log-level in Logger.cpp to see whats happening in the controller.

MRC does not respond unexpected data in the EEPROM may freeze the MRC. In main.cpp uncomment Eepromstorage.clear(); in line 75.

can not send commands make sure your serial monitor sends a '\r' when pressing return. Otherwise in MRCP.h change the MRCP MRCP_END_FRAME = '\r' to any unused char.