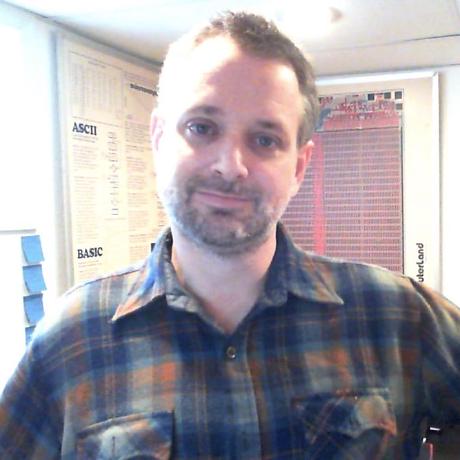 After playing games like Oregon Trail on the school Apple IIe computers as a kid in the mid 1980s I just had to know how they made this stuff. I started reading about programming. My first programs, in BASIC, were written in pencil in a spiral notebook and later typed in at the public library. Within a few years I had learned Pascal and a little bit of assembly.

The Apple II line went extinct and I didn't have the perspective to understand what in my skills was still useful. PCs were advancing too fast to keep up with and my family couldn't afford to be buying another computer every year. So I got out of the code game and threw myself into music. Band was pretty much the only reason I bothered to show up to high school.

I tried going to college to be a composer but ended up discovering and being corrupted by the Internet. I dropped out, then made zines and played in a bunch of weird lo-fi/punk/noise bands for a few years and lived that dirtbag life. The only kind of job I could manage to hold down long-term was delivering pizza. After a while I got married and lived in a trailer park.

A friend who had found his way into IT encouraged me to get back into computers. I enrolled in one of those 2-year colleges that advertised on the Maury show. By graduation I realized that software development was my calling but I was going to need a Bachelors degree to be taken seriously as a job candidate. Eventually, at the age of 30, I got one. I'd made a point to study Computer Science foundations and theory over specific technologies, so that I'd have an underlying basis to learn and move with changing technology. I was not going to let myself become obsolete again.

After getting laid off from the only cool tech startup in Black Hawk County, I moved to Des Moines. I been out here grindin ever since. I've been called a unicorn and a Swiss army knife and a whole lot of other complimentary things I'm weirdly uncomfortable with.

I've got struggles and opinions and eccentricities and I find it soul-crushing to pretend otherwise (and believe me I have tried for many years). If you can't handle that, we might not get along. Don't let that dissuade you from giving us a chance though. I'm generally accommodating to a fault.

236 contributions in the last year