A 2D path and shape drawing library for MonoGame and XNA. 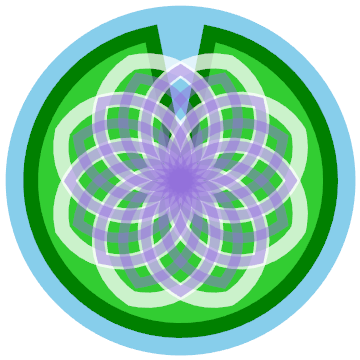 LilyPath is a 2D drawing library for MonoGame and XNA. LilyPath provides some of the functionality found in System.Drawing, such as drawing paths and shapes with configurable pens and brushes.

Instead of creating raster images, LilyPath renders everything directly to your scene or render target. Complex paths and filled shapes are rendered as polygons, while primitives are rendered as GL or DX lines.

Drawing is handled through a DrawBatch object to reduce the number of draw calls needed. This mirrors the role of SpriteBatch for rendering textured quads. More complex geometry can be compiled ahead of time into GraphicsPath objects, which contain the polygon data after arcs, joins, and other calculations have been completed.

Here’s a short code sample for drawing the lily pad in the picture above (without the flower):

Source code for the full image and other examples can be found in the included test project, LilyPathDemo.

NOTE: The example projects are built with GL controls which do not work with the last few years of MonoGame. Try running them against MonoGame 3.0 or 3.1.

A 2D path and shape drawing library for MonoGame and XNA.