Turn your documentation into a live demo with clickable console commands

Turn your project readme into a fully interactive demo. Write nothing more then Markdown.

Everything is run in the browser. Under the hood Play with Docker is used to spin up machine instances so users dont need to install anything. You dont even need to use Docker if your project does not. 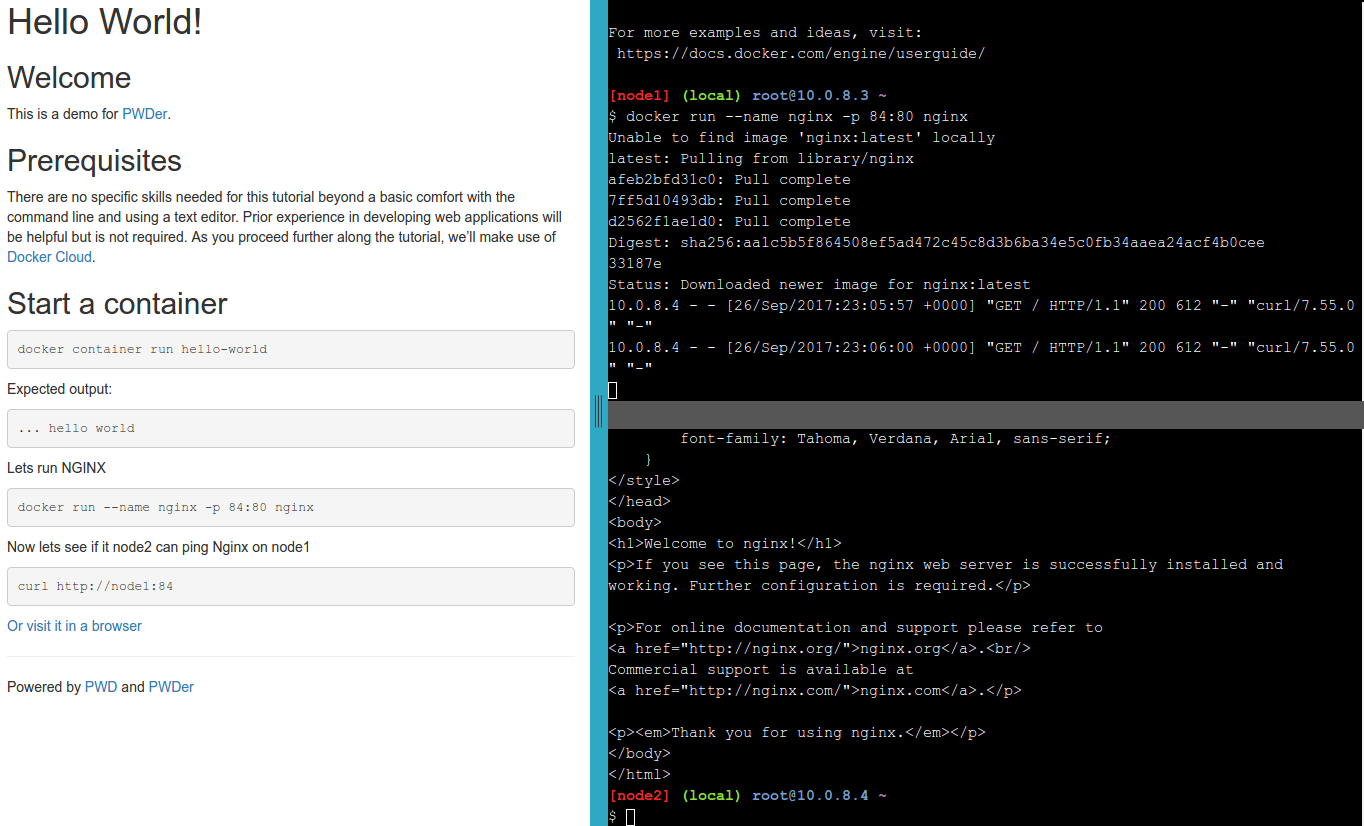 I have taken down the pwder.io site since this project is not as useful as it originally was.

A few months after I stared working on this, the hosted Play with Docker service changed its authentication method. Formerly all that was needed when starting a new session was to enter a captcha. Now, to authenticate you need a DockerHub account.

While DockerHub accounts are easy to get and free, it severely limits the usefulness of PWDer since it was intended to be a quick interactive way for anyone to use a document they are reading. If someone wants to demo their petstore app online, requiring a demo user to have a Dockerhub account would not make sense.

I do have the option of hosting Play with Docker myself and reverting to captcha authentication. But administering, monitoring, maintaining, and paying for this is more then what I wanted to take on for this project. My original goal was only to add a feature to already existing infrastructure.

That being said, you can still use this locally from source if you want. I recommend going to the Play with Docker site and logging in with a Dockerhub account first. Then bringing up pwder on your own workstation/server.

Play with Docker is a fantastic tool for spinning up VMs for use in a browser for learning and testing your Docker knowledge.

The Play with Docker classroom is also a great resource that provides canned tutorials to showcase different Docker features and integrations.

If you want to showcase your own application there is not a simple way to do it. You could either write the HTML/Javascript yourself to make use of the PWD Javascript SDK or you could fork the classroom repo and host a copy of that.

PWD-er simplifies this for you by rendering the markdown into a template for you as needed. No Jekyll precompilation necessary. Just post a Markdown readme that [follows the writing guide]((https://github.com/play-with-docker/play-with-docker.github.io/blob/master/writing-tutorials.md) to your github project, a gist, or any public site and point to it with PWD-er.

An Nginx 'hello world' without Docker

doc (required) - URL path to a publicly accessible Markdown demo for your project. It should follow the format described in the [PWD guide for writing tutorials] (https://github.com/play-with-docker/play-with-docker.github.io/blob/master/writing-tutorials.md)

template (optional) - URL path for a Liquid template that your markdown will be rendered into. If you want to do this, its probably best to copy default.html and make modifications to that.

(front matter parameters) (optional) - These can be used to override values specified in the front matter. For example you can specify a value for 'terms' in case you want to force a different number of terminals to be shown.

/gh/ - Shorthand for github raw content. Translates into a query parameter of doc=https://raw.githubusercontent.com/

/gst/ - Shorthand for github girt content. Translates into a query parameter of doc=https://gist.githubusercontent.com/

/examples/ - This will read a file out of this project's examples directory. This is primarily used for development, but can also be used to test writing your own documents if you dont want to publish them first.

/here/ - If the environment variable PWDER_HERE_DIR is set at start time, this path will be used to serve documents from. Like /examples/ this is only used for testing and development.

You can run your own instance of the service instead of using the hosted http://pwder.io/ . This can be useful when writing your own documents. The only requirement is to have Docker installed.

This will start a live instance that you can work on.

Set the PWDER_HERE_DIR environment variable to serve documents from the local server. This is used by the /here/ route.

For example if you documents are in /tmp/docs:

WARNING: This should be used in testing or development only, and if set incorrectly can expose a security risk to the server. For example if PWDER_HERE_DIR is set to '/', then the consumer can visit '/here/etc/passwd' in their browser.

Turn your documentation into a live demo with clickable console commands