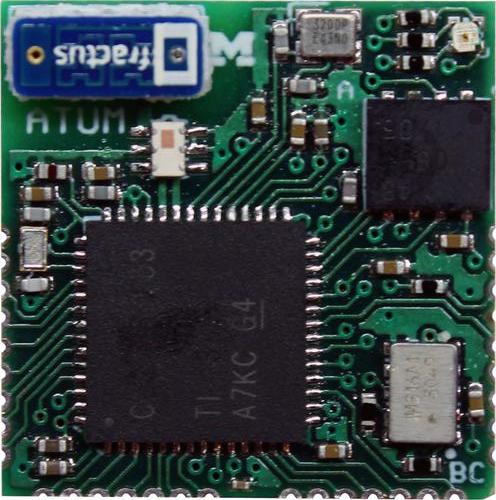 Atum is a ½ inch² drop-in sensor node module designed to enable rapid prototyping of wireless embedded devices. The core of Atum is a CC2538 SoC with an Arm Cortex M3 and 802.15.4 radio. Atum also includes an antenna, 512 bytes of non-volatile FRAM memory, an RTC, and a tri-color LED.

Atum is designed to have two different usage patterns. First, three sides of the device have castellated headers allowing Atum to be directly soldered onto a carrier PCB. Atum handles all of the computation and communication while the carrier board supplies power and attaches sensors or other peripherals. In the second option, Atum can function as a complete sensor node. On the bottom are pads for a 3.3 V regulator and a battery. If needed, a peripheral or sensor board can be stacked on top using the headers as a bridge.

Atum is the spiritual successor to Epic. It is slightly smaller, replaces flash with FRAM, adds an RTC, and includes an antenna. Epic was designed to be highly flexible while still providing the components that are common on many sensor platforms. In practice, however, I noticed that only a small subset of the common features were regularly used and that Epic carrier boards often repeated the same designs. Atum tries to address this by providing a simplified interface that provides the features (e.g. SPI, I2C, ADC, GPIO) that sensor boards need.

The spelling "Atum" is taken from the ancient Egyptian god of creation, but finds better connections as a misspelling of "atom", a core building block of matter, and as the conjoined words "at" and "UM", as Atum was developed at the University of Michigan.

Atum is currently pannelized 40 to a panel. They are designed to be 1mm thick with castellations on the edge. See hardware/atum for board files and gerbers.