ObjectiveGit provides Cocoa bindings to the libgit2 library, packaged as a dynamic framework for OS X and iOS 8 or better.

A brief summary of the available functionality:

Not all libgit2 features are available, but if you run across something missing, please consider contributing a pull request!

Many classes in the ObjectiveGit API wrap a C struct from libgit2 and expose the underlying data and operations using Cocoa idioms. The underlying libgit2 types are prefixed with git_ and are often accessible via a property so that your application can take advantage of the libgit2 API directly.

The ObjectiveGit API makes extensive use of the Cocoa NSError pattern. The public API is also decorated with nullability attributes so that you will get compile-time feedback of whether nil is allowed or not. This also makes the framework much nicer to use in Swift.

ObjectiveGit requires Xcode 7 or greater to build the framework and run unit tests. Projects that must use an older version of Xcode can use Carthage to install pre-built binaries or download them manually.

Simply run the script/bootstrap script to automatically install dependencies needed to start building the framework. This script uses Homebrew to install these tools. If your Mac does not have Homebrew, you will need to install the following manually:

There are three ways of including ObjectiveGit in a project:

and add the paths to the frameworks you want to use under “Input Files”, e.g.:

The different instructions for iOS works around an App Store submission bug triggered by universal binaries.

dSYM files are not currently included in the GitHub release zip files. You will need to pass --no-use-binaries to carthage in order to build locally and generate the dSYM files alongside the framework. 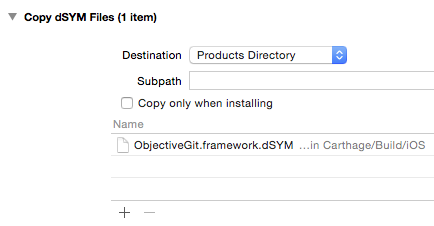 Note that the iOS framework we release is a "fat" framework containing slices for both the iOS Simulator and devices. This makes it easy to get started with your iOS project. However, Apple does not currently allow apps containing frameworks with simulator slices to be submitted to the app store. Carthage (above) already has a solution for this. If you're looking to roll your own, take a look at Realm's strip frameworks script.

You can see all the amazing people that have contributed to this project here.

ObjectiveGit is released under the MIT license. See the LICENSE file.