gridOric is a small fun program for Oric Atmos or Pravetz-8D, which I have been written for MiniGame Compo 2003 - it participated in 4kb competition. 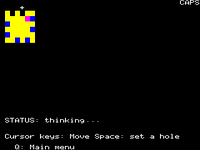 The program helps to create a good cryptographic grille. Then the created grille can be used to write and read encrypted texts. Grille as well as encrypted texts can be saved on tape.

When I was a kid, I loved short stories about Sherlock Holmes. After I have read "The Adventure of the Dancing Men" by Sir Arthur Conan Doyle, by using the same technique, I was able to decrypt and read old texts found in the notebooks of one of my old relatives. My mother was not happy about that, and to distract me from that, she said there are more advanced encryption methods and suggested to read Mathias Sandorf by Jules Verne to learn about them.

The grille from the book is very good one. It was not easy for me to design equally good grid to use with my friends at school. Back then, in early nineties I was not able to program something like this to help me to create a good grid.

Then years after, I wanted to represent Oric community at MiniGame Compo, and have been written this program. It has two modes - grille designer mode, and text encryption mode. I was not able to fit the decrypting part in to the required 4k output file. Though now I believe it is quite possible. (:

To load the program in the xeuphoric emulator type:

if you use modern xeuphoric.

Choose a task from menu:

Example grid MATIAS which comes with the software is a grid from Jules Verne's 'Mathias Sandorf' book and looks like:

This is an excellent grid: when you turn it around for 4 times, and write a text in the holes, then the resulting text will cover the whole square. And after the rotation the empty cells of the grid will never overlap with the cell on the paper where the letter have been already written.

To place a hole on a grid you must press 'SPACE'. Use arrow keys to move around. Pressing space bar again will undo the placement of the empty cell there.

If you have made a mistake, press 'backspace' or 'left arrow'.

Press any key when once empty cells are filled with letters and you need to turn the grid by 90 degrees again.

Then you can save encrypted text to the tape. This text can be decrypted with the grid, it was encrypted with.