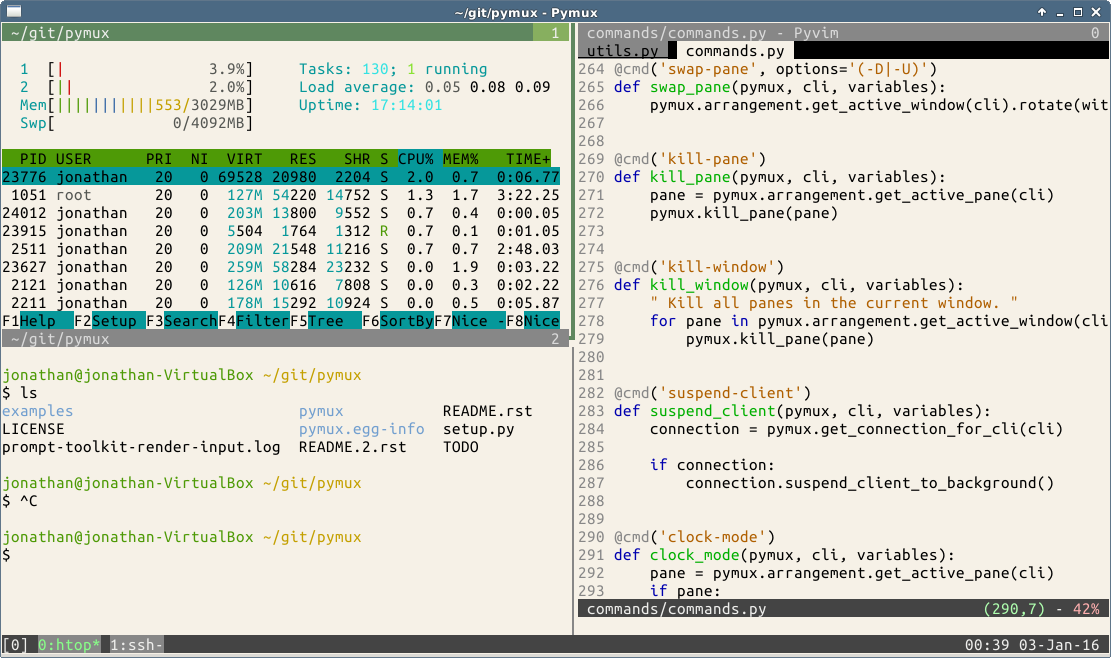 Start it by typing pymux.

A terminal multiplexer makes it possible to run multiple applications in the same terminal. It does this by emulating a vt100 terminal for each application. There are serveral programs doing this. The most famous are GNU Screen and tmux.

Pymux is written entirely in Python. It doesn't need any C extension. It runs on all Python versions from 2.6 until 3.5. It should work on OS X and Linux.

To some extent, pymux is a clone of tmux. This means that all the default shortcuts are the same; the commands are the same or very similar, and even a simple configuration file could be the same. (There are some small incompatibilities.) However, we definitely don't intend to create a fully compatible clone. Right now, only a subset of the command options that tmux provides are supported.

The big advantage of using Python and prompt_toolkit is that the implementation of new features becomes very easy. 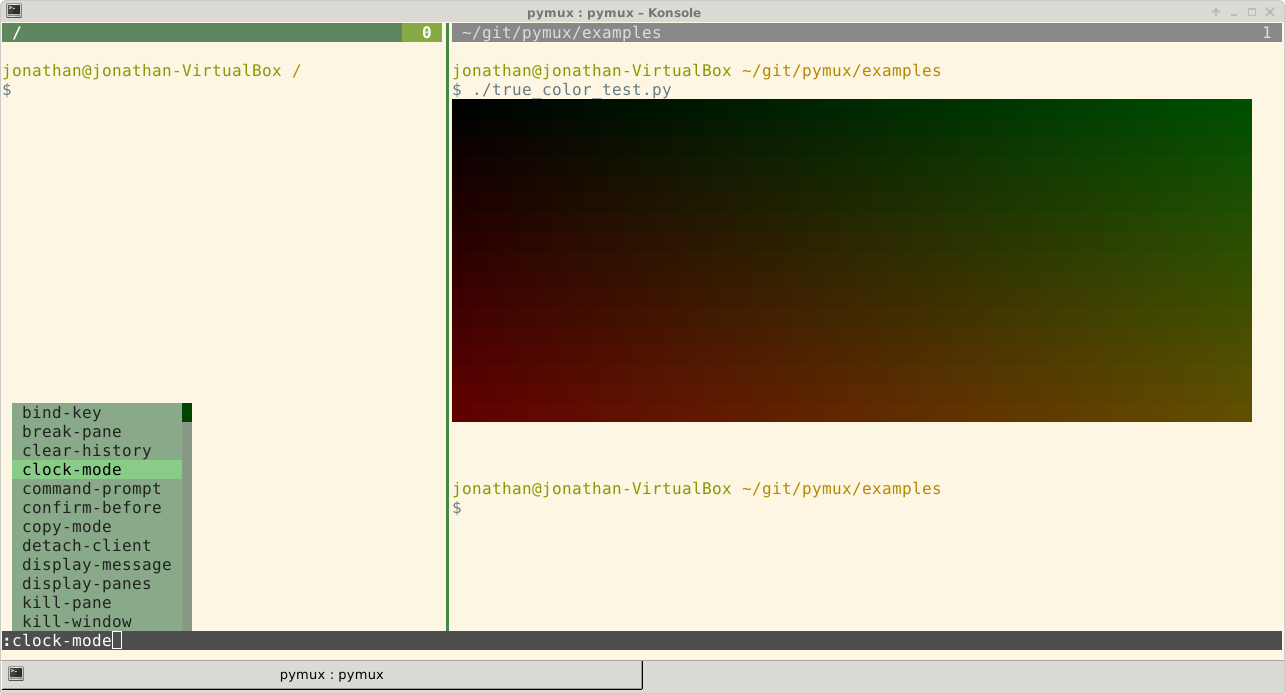 What happens if another client with a smaller screen size attaches: 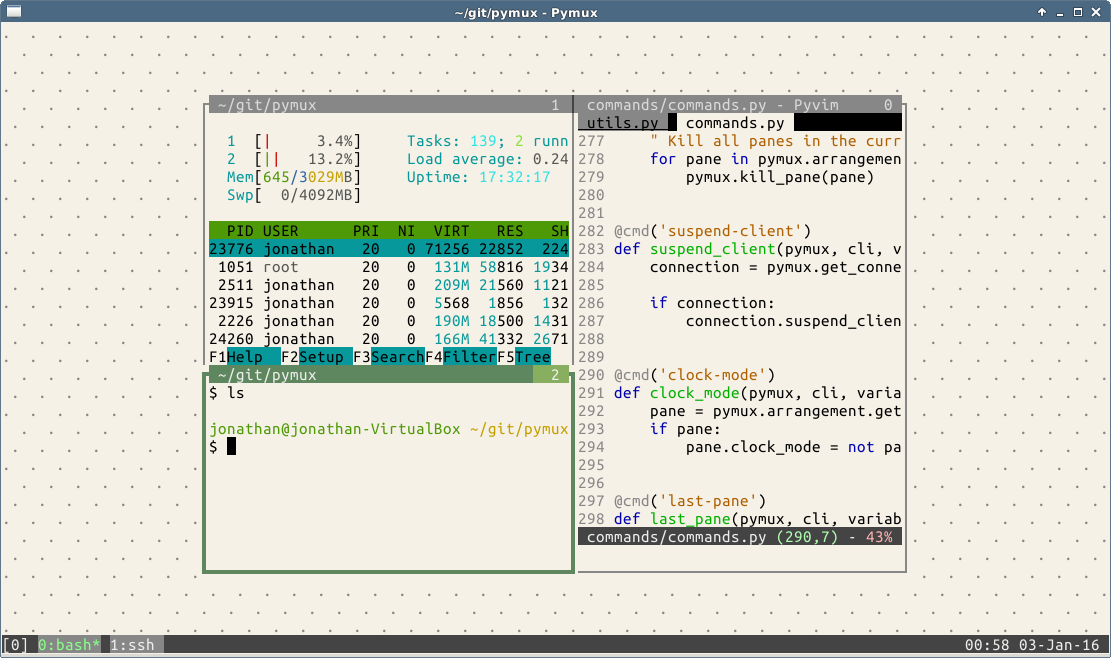 When a pane enters copy mode, search results are highlighted: 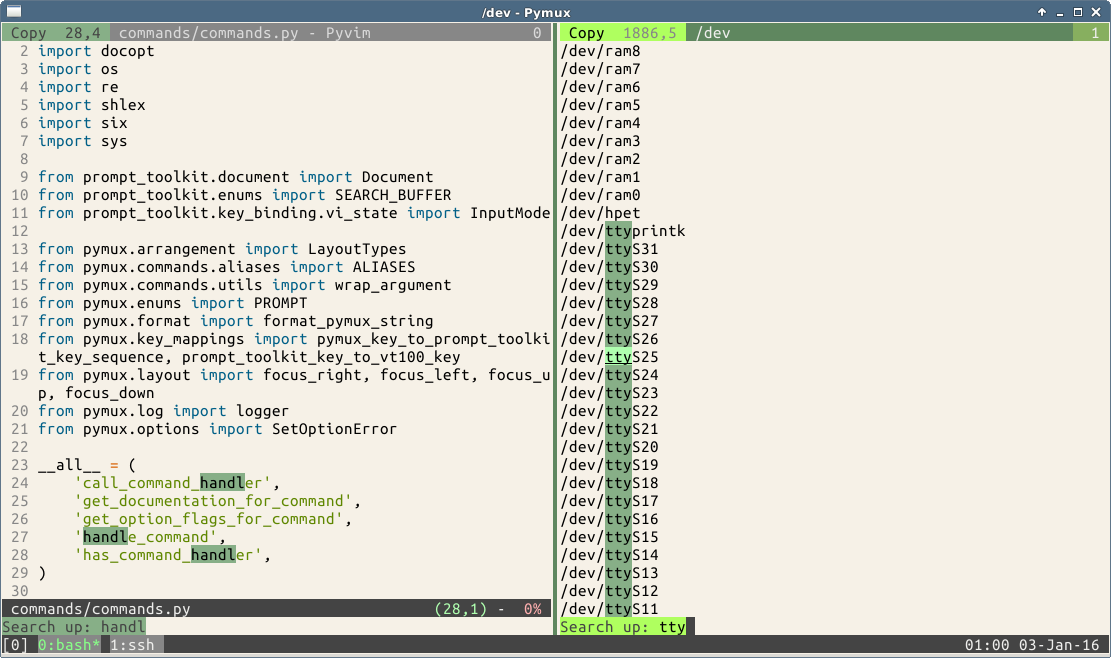 Why create a tmux clone?

For several reasons. Having a terminal multiplexer in Python makes it easy to experiment and implement new features. While C is a good language, it's not as easy to develop as Python.

Just like pyvim (A Vi clone in Python.), it started as another experiment. A project to challenge the design of prompt_toolkit. At this point, however, pymux should be stable and usable for daily work.

Further, the development is especially interesting, because it touches so many different areas that are unknown to most Python developers. It also proves that Python is a good tool to create terminal applications.

There is no official roadmap, the code is mostly written for the fun and of course, time is limited, but I use pymux professionally and I'm eager to implement new ideas.

Create a file ~/.pymux.conf, and populate it with commands, like you can enter at the command line. There is an example config in the examples directory.

What if it crashes?

If for some reason pymux crashes, it will attempt to write a stack trace to a file with a name like /tmp/pymux.crash-*. It is possible that the user interface freezes. Please create a GitHub issue with this stack trace.