Python in the browser, precompiled for speed: http://www.transcrypt.org

Thanks to everyone who contributed!

As can be seen below, there's a simple parallel between the Python and the JavaScript code. In combination with the use of sourcemaps, this enables efficient debugging. Also, code can be tested from the command prompt using stubs. 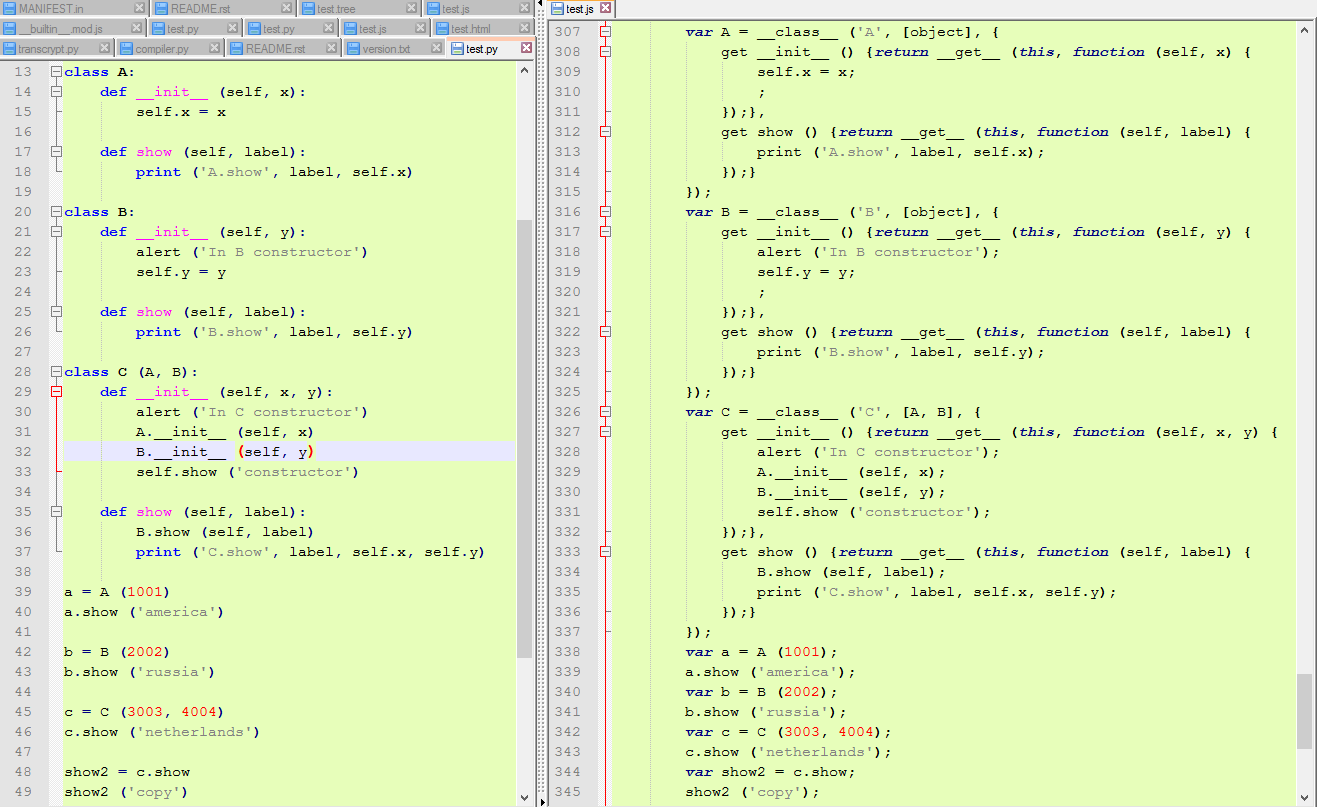 Transcrypt started out as a personal repo, owned by Jacques de Hooge. As the project caught on and the number of people contributing issues, ideas and code grew, the repo was transferred to the QQuick organisation, to be able to form a developer team on GitHub.

There was also a clear message in this: Transcrypt isn't owned by anyone in particular. It is the collective property of everyone using it or contributing to it. At the same time the need was felt to keep a very firm grip on code quality, especially of the core.

Everything under ../transcrypt/modules/org/transcrypt plus the file ../transcrypt/__main__.py is considered to be part of Transcrypt's core. A major design goal is to keep the core small and fast. This means that some CPython facilities were deliberately left out or simplified. Core development is still mainly done by Jacques, but with the input of many great ideas submitted as issues. If you want to improve something in the core, this is best initiated by first opening an issue for it. Opening a pull request directly can lead to disappointment, although all effort is made to take good ideas seriously.

All other parts of Transcrypt are referred to as periphery. While a good quality pull request for the periphery stands a reasonable chance of being accepted, still it is wise to start an issue beforehand, allowing coordination and preventing waste of effort.

A special place is taken by implementing standard libraries. While Transcrypt mostly relies on browser-centric JavaScript libraries, availability of a limited number of standard libraries will help acceptance by Python programmers. So you're most welcome to make a contribution here. The design goal again is: better 90% complete, fast, small, and reliable, than 100% complete, slow, bulky and buggy. If you contribute a library, please also contribute an autotest (see docs) and some documentation for it. The supported platforms are Windows and Linux (and, with that, OsX).

While being open and respectful to any good ideas, the final say as to what gets in and what doesn't, is with Jacques. So this is a dictatorial rather than a democratic project. Being a sailer himself, Jacques values the notion of having one captain on a ship. The captain doesn't own the ship, but he serves the passengers by consulting with the crew and plotting one stable course.

Another possibility to contribute libraries to Transcrypt is by submitting them as separate packages to PyPi. In that case be sure to add the keyword Transcrypt to allow people to find your package. Making your package pip-installable will also help it to catch on. Contributing packages via PyPi of course means total freedom for the developer.

The icon above shows the outcome of the continous integration test that is done on Linux after each commit. The test consists of running a set of testlets, systematically covering all facilities of Transcrypt. Each testlet performs an automated back to back test against CPython.

The full set of testlets is described in the documentation and comes with the distribution. Since the branching model has been deliberately kept simple, continuous integration may be transiently broken. In that case you can use the latest passing version, that you'll find by clicking on the icon above and then on 'Build History'.

Each release, on the other hand, is preceded by at least the following tests:

What's new in the latest commits