Sourcebit connects to multiple data sources, for example data in a headless CMS like Contentful or Sanity, to a destination, such as a JAMstack site built using Jekyll or Hugo. The easiest way to understand how this works is to see it in action via our video demo on YouTube. 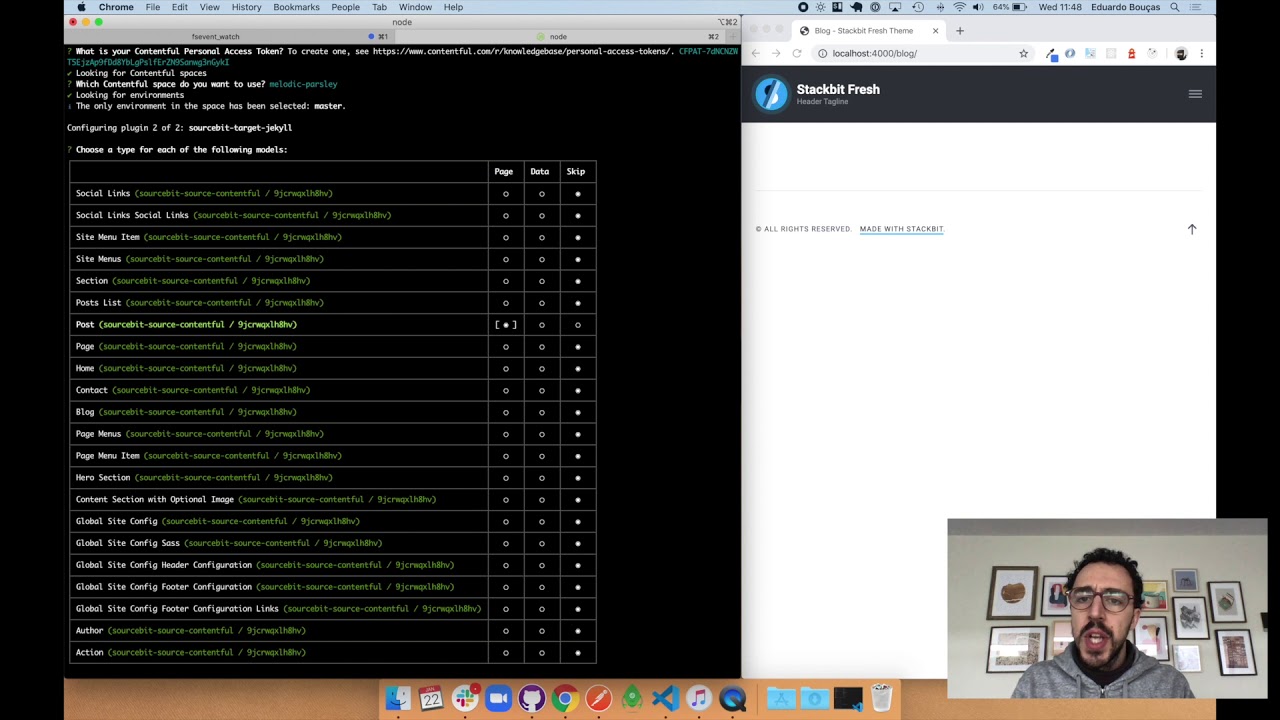 Sourcebit works through the use of two types of plugins:

Read more about the anatomy of a plugin.

For a complete getting started walkthrough, check out this step-by-step tutorial: https://www.stackbit.com/blog/data-driven-jamstack-sourcebit/

To ease the process of configuring Sourcebit, we've created a command-line tool that provides an interactive setup process that will install the project and any necessary plugins. It asks a series of questions defined by each plugin and generates the necessary configuration file (sourcebit.js) so that you can get up and running in no time.

To start this process, in your project directory run npx create-sourcebit or, if you've already installed Sourcebit, npm init sourcebit.

Sourcebit is distributed as an npm module. We recommend using the interactive setup process, but if you would like to manually install it and add it as a dependency to your project, run:

Everything about Sourcebit, including its plugins and their parameters, is configured in a JavaScript object that lives in a file called sourcebit.js. Each plugin can specify options and/or functions as seen in the basic code example below.

It's important to note that while every plugin block is defined with the module and options properties, the actual options passed to each options block varies widely and is defined and documented by each plugin.

As a CommonJS module

To use Sourcebit as a CommonJS module, include it in your project and call its fetch method.

As a command-line tool

To use Sourcebit as a command-line tool, once it is installed, run the sourcebit fetch command in your project directory.

Note that if you do not have your local npm_modules on your PATH, you will need to run ./node_modules/.bin/sourcebit fetch or follow the instructions here to update your PATH.

When working on content in the CMS, you can automatically update content locally with changes made in the CMS by using the --watch flag.

Sourcebit core has built-in support for caching. Whenever a plugin uses setPluginContext to save data to its context object, it gets persisted to a file named .sourcebit-cache.json on disk. When sourcebit fetch is next executed, the context object will be automatically populated with the cached content before the bootstrap method is invoked.

For a step-by-step guide to creating a plugin for Sourcebit, check out this tutorial: https://www.stackbit.com/blog/sourcebit-plugin/

Sourcebit is designed to be completely extensible. Documentation on how to build plugins can be found on our wiki.

If you'd like to contribute to Sourcebit, either by adding a feature to the core application or by creating a brand new plugin, check out our contributing guidelines.