An example using Codeship for continuous deployment to Surge.

An example using Codeship for continuous deployment to Surge.sh.

Continuous Deployment services like Codeship make it possible to run publish your project on Surge each time you push to a GitHub or Bitbucket repository.

This guide will walk you through:

First, you’ll need your token from the Surge CLI. This secret key lets services like Codeship login and publish projects on your behalf. Get your Surge token by running the following command in your terminal:

You’ll be asked to login again, and afterwards your token will be displayed like this:

Adding Surge as a devDependency to a package.json file

Codeship’s machines won’t have Surge installed by default, so you also need to save Surge as a development dependency in your project. This lets Codeship know it needs to install Surge to publish your project.

You can do this by creating a package.json file if you don’t have one already. Run the following command in your terminal to be walked through making this file (you can hit enter to accept the defaults):

You will end up with a file that looks something like this one.

Next, run this command to save Surge as a devDependency, so Codeship will install it:

Add your project’s repository to Codeship

Now you can login and setup a new project on Codeship. Add your project’s GitHub or Bitbucket repository to your Codeship projects: 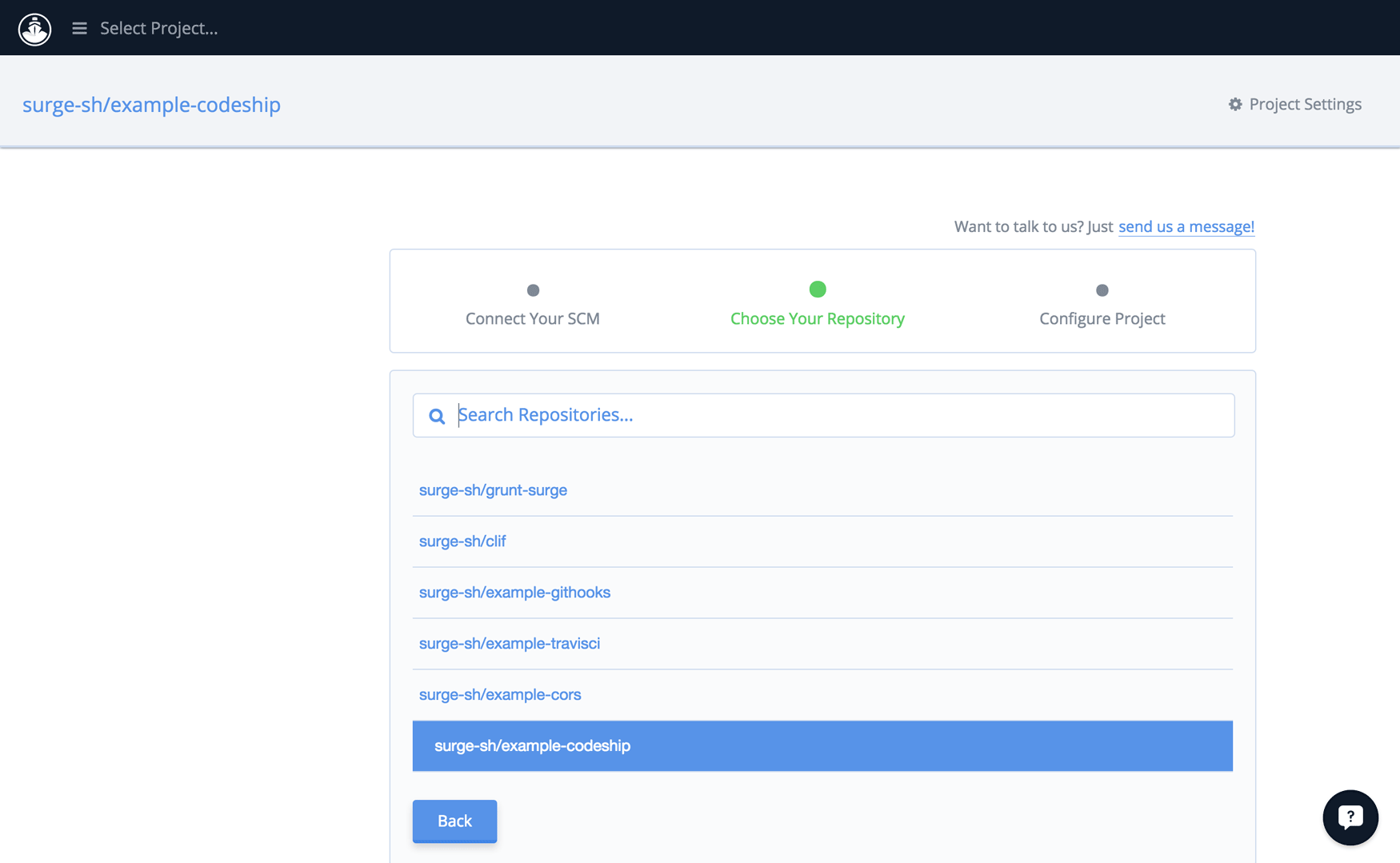 Define your Setup and Test Commands 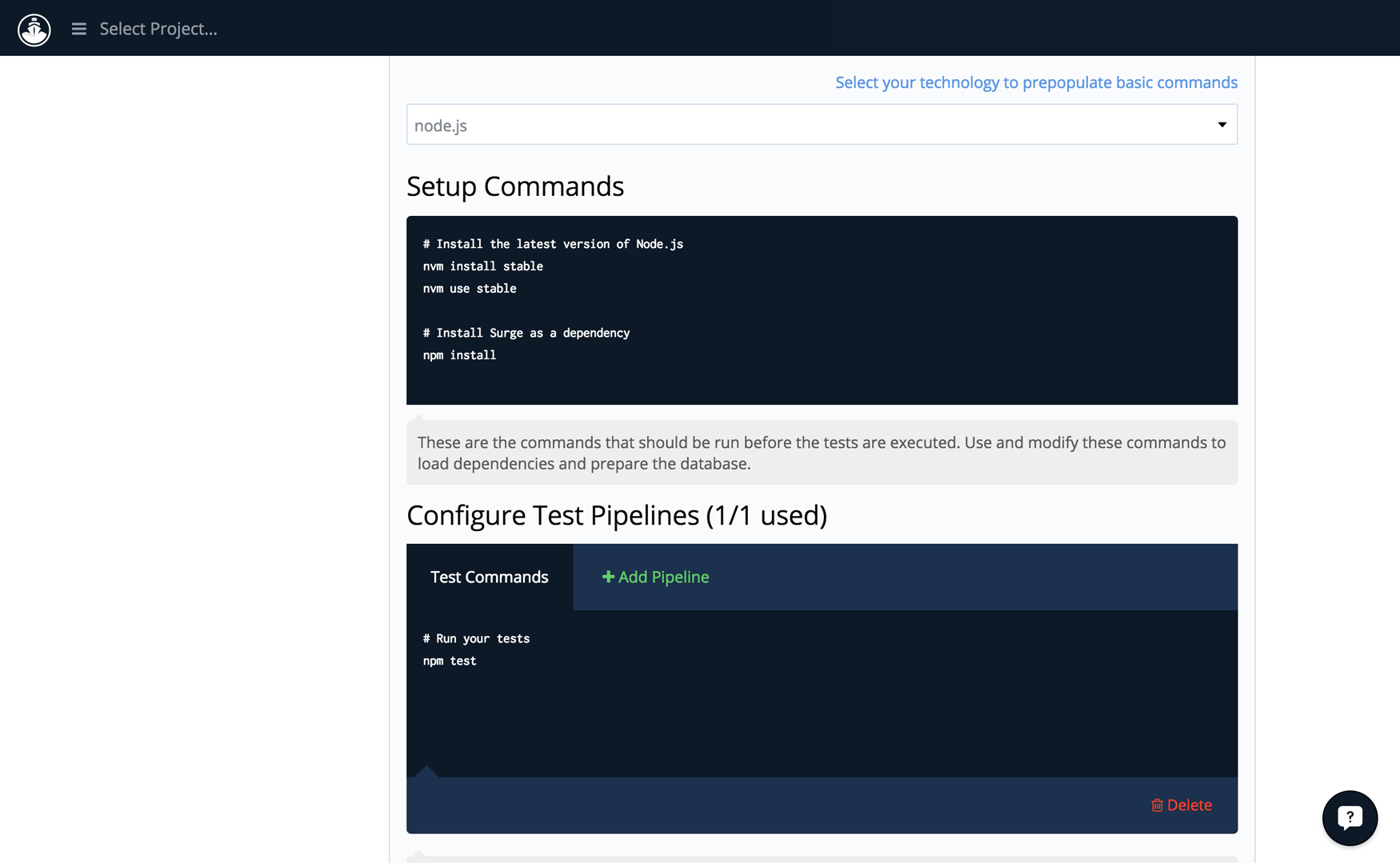 After you push you successfully to your repository, Codeship will run your Test Pipeline commands:

Press Environment Variables next, and you’ll be able to secretly add your email address and token so Codeship can login to Surge for you: 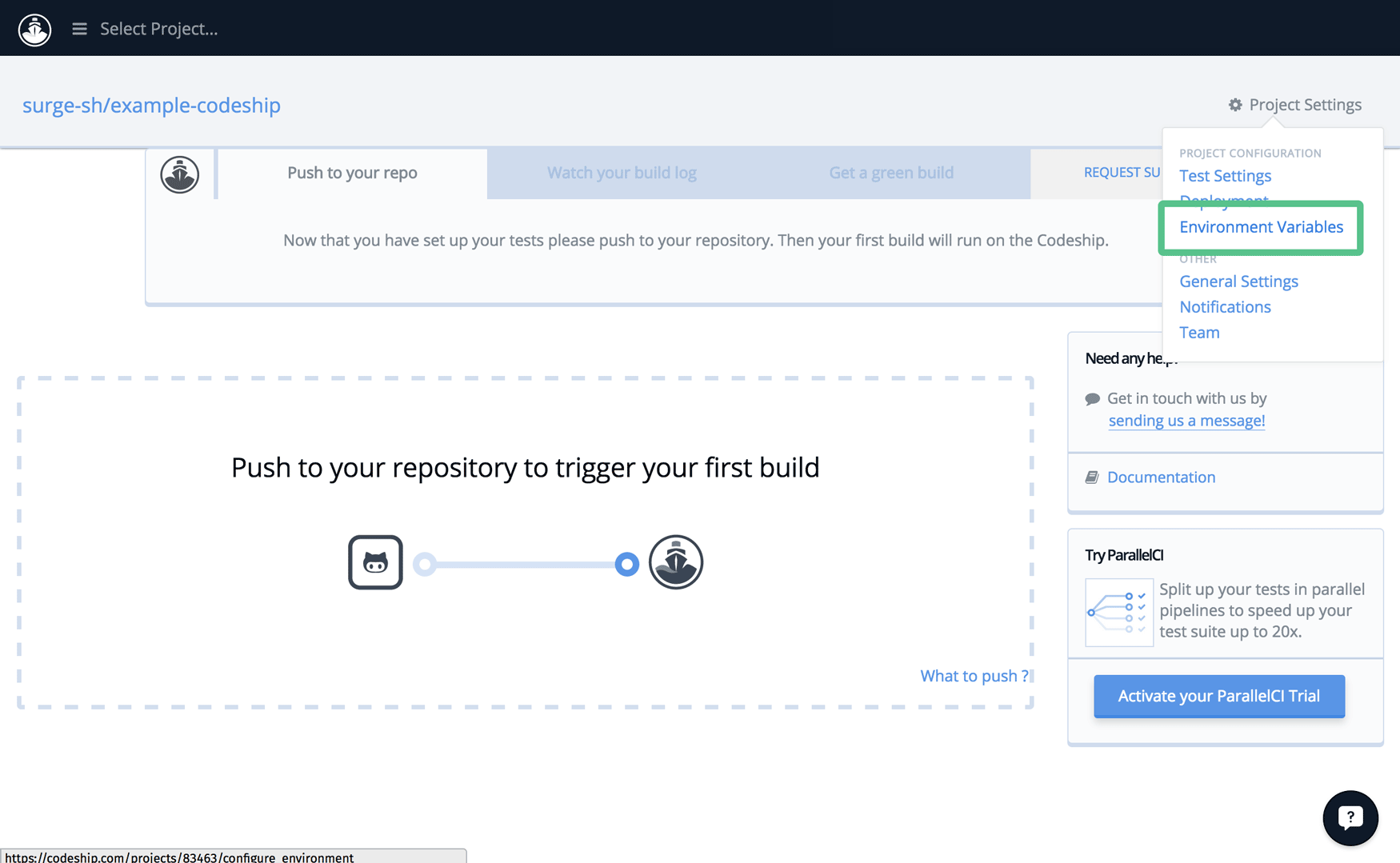 …and set it to the email address you use with Surge. Next, add another environment variable called:

…and set it to your Surge token. 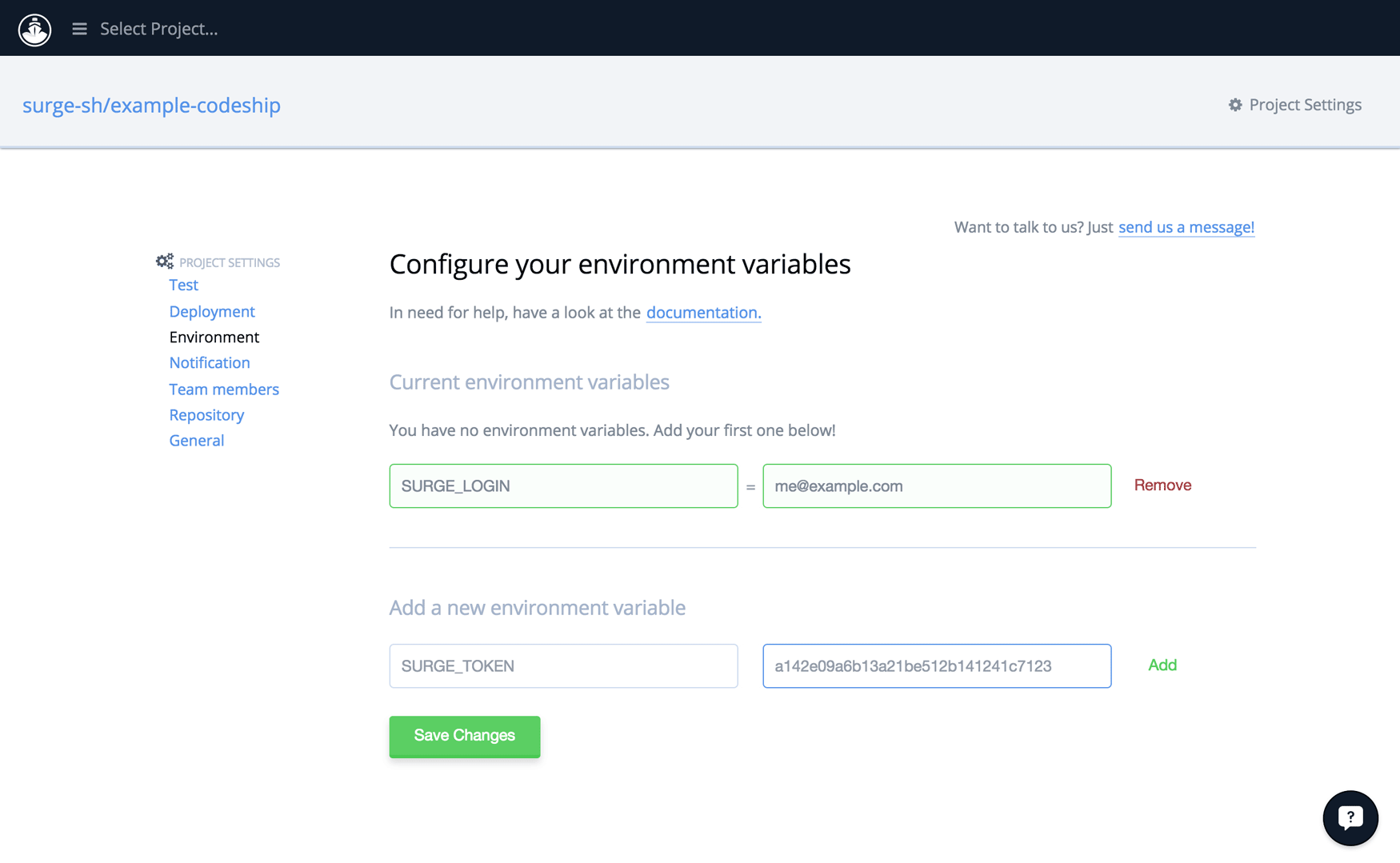 Push to your repository, and your Setup and Test commands should run, triggering your tests to run on Codeship. Now, Codeship will let you move onto adding a script for Continuous Deployment. You can press the button labeled Set up Continuous Deployment or access this section under your project settings: 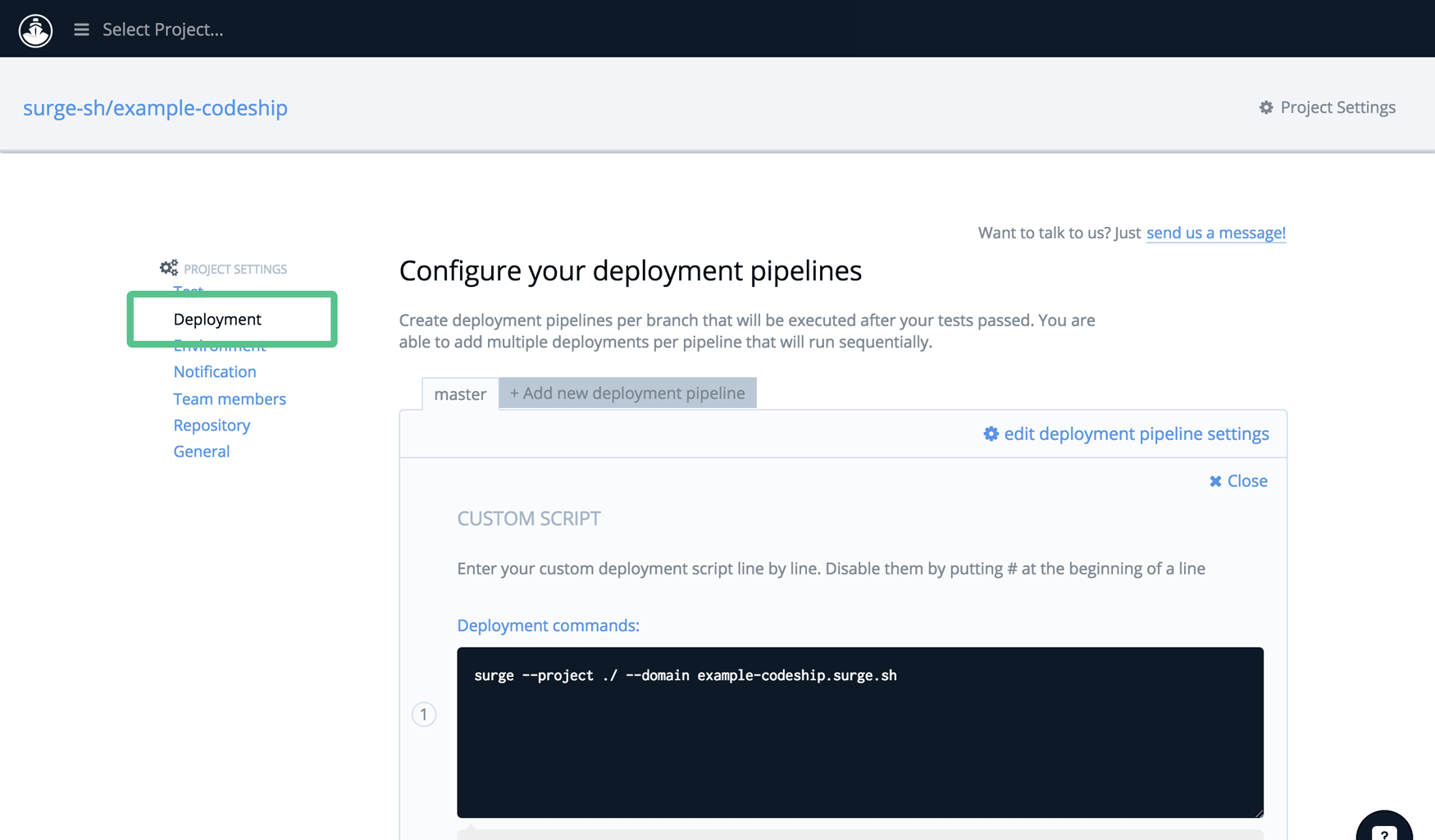 Add a Custom Script and enter the command you want to run with Surge, for example:

Now, when you push your poject to GitHub or Bitbucket again, this command will be run and your project will get published automatically.

An example using Codeship for continuous deployment to Surge.