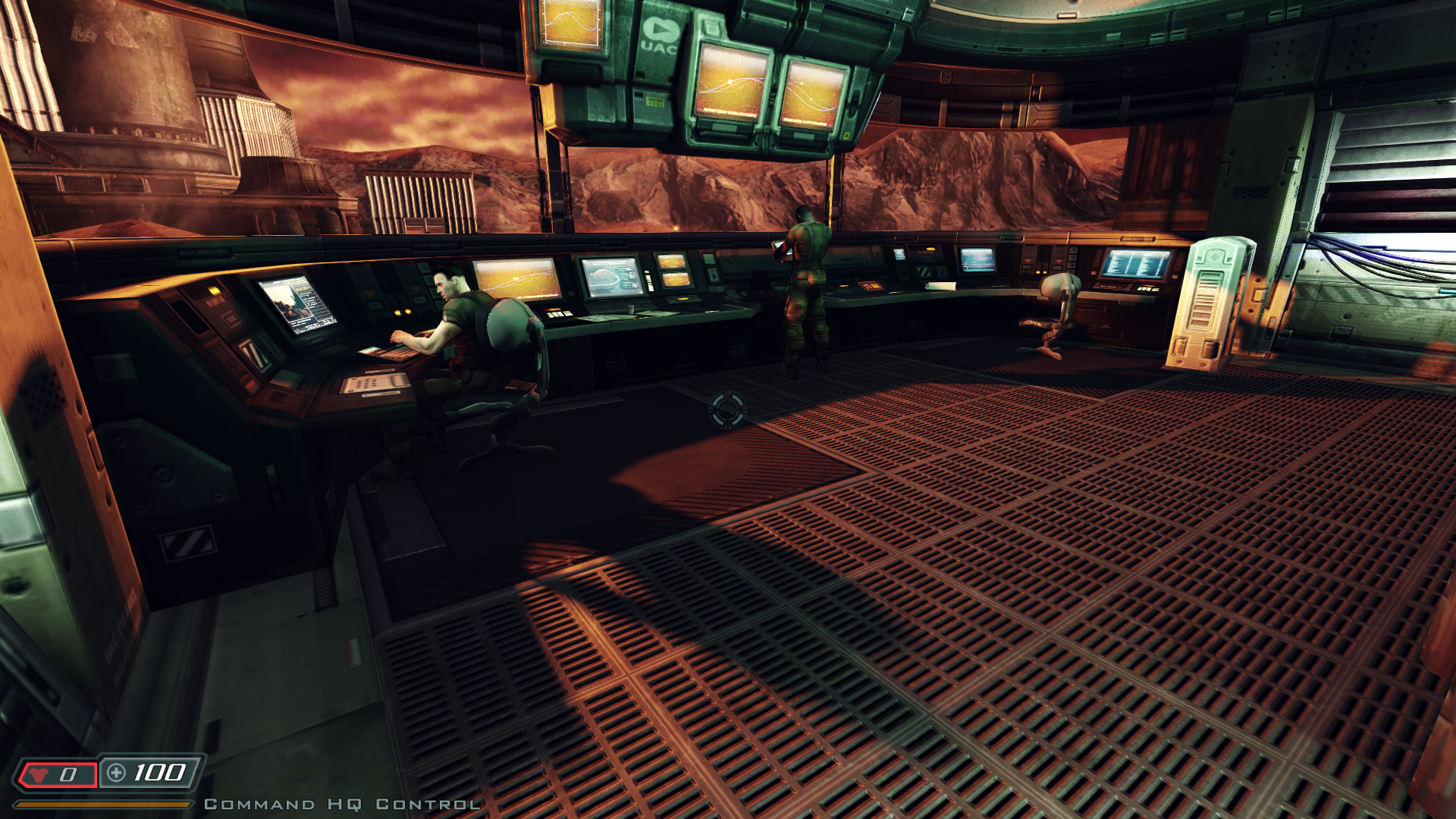 This file contains the following sections:

RBDOOM-3-BFG is based on DOOM-3-BFG and the goal of this port is to bring DOOM-3-BFG up to latest technology in 2019 making it closer to Doom 2016 while still remaining a DOOM 3 port regarding the gameplay.

I started this project in 2012 and focused on making this code being future proof so other cool projects can build interesting things on top of it without the need to fix a lot of stuff first. Over 40 people all over the world contributed cool patches. Some results are:

If you want to start mod from a directory, you should first specify your mod directory adding the following command to the launcher:

Left: Wrong original Blinn-Phong in sRGB gamma space. Right: Gamma correct HDR rendering in linear RBG + ACES Film Tonemapping Try it yourself, it is hard to see the effect in a single Screenshot. 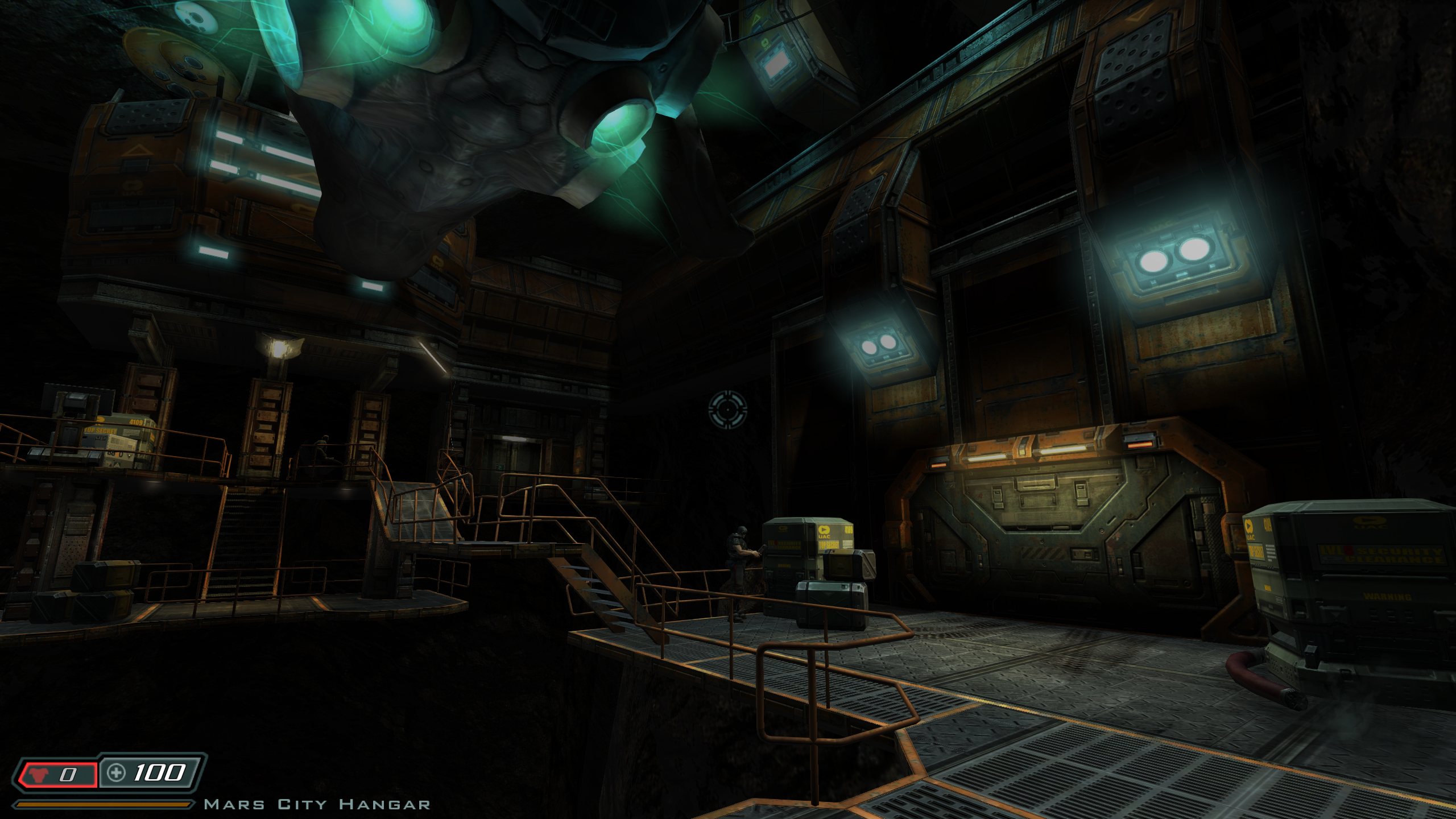 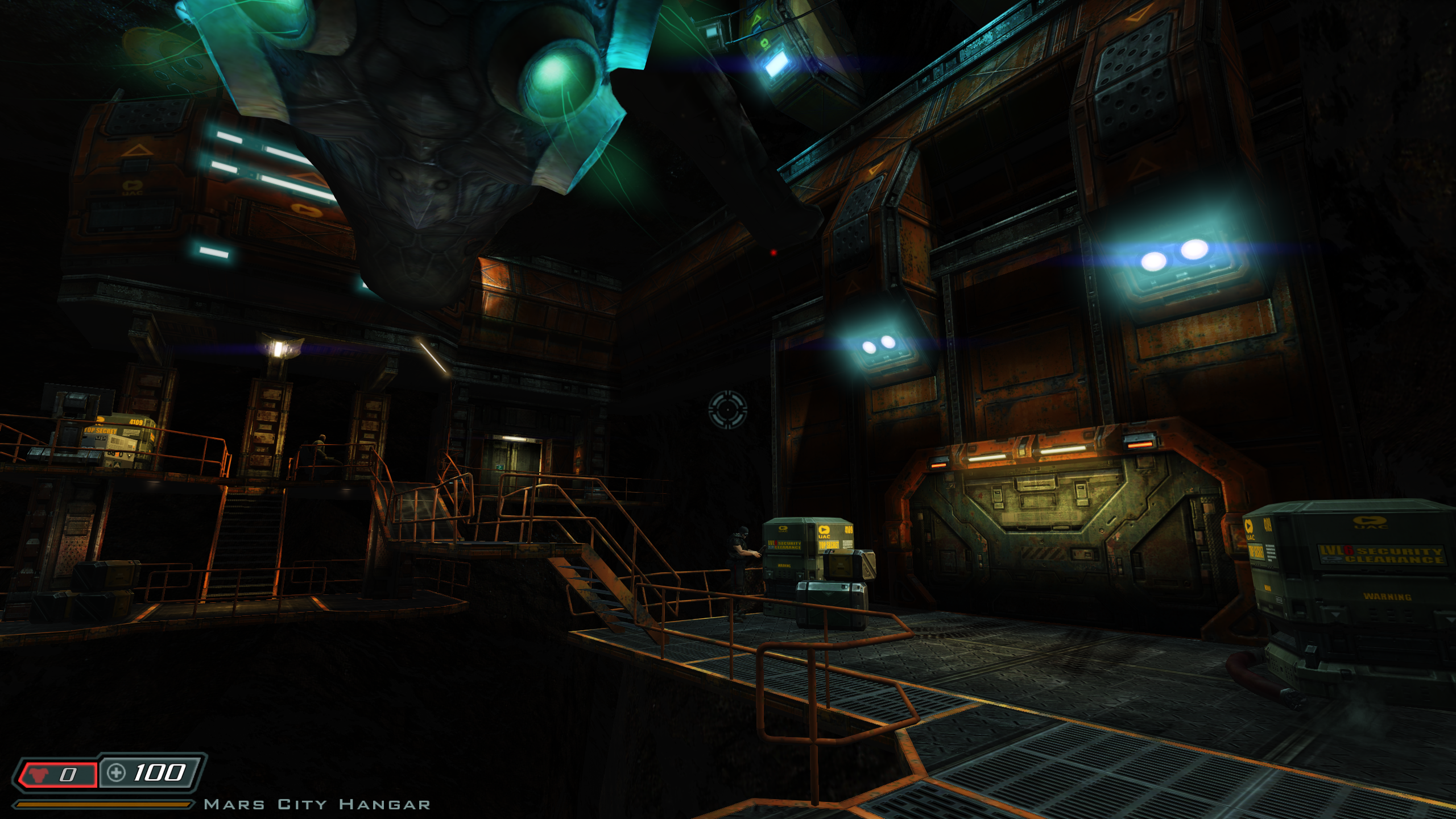 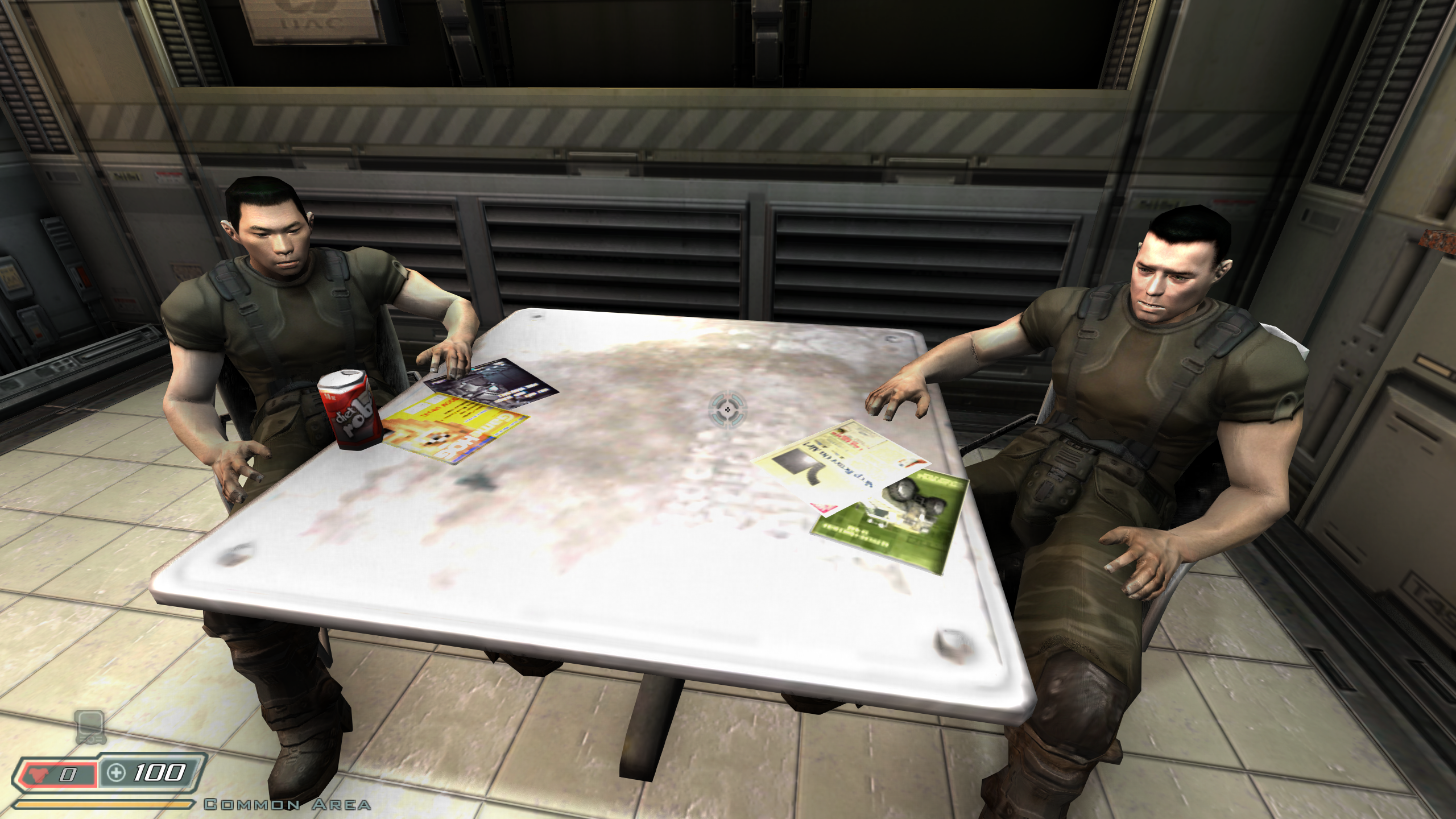 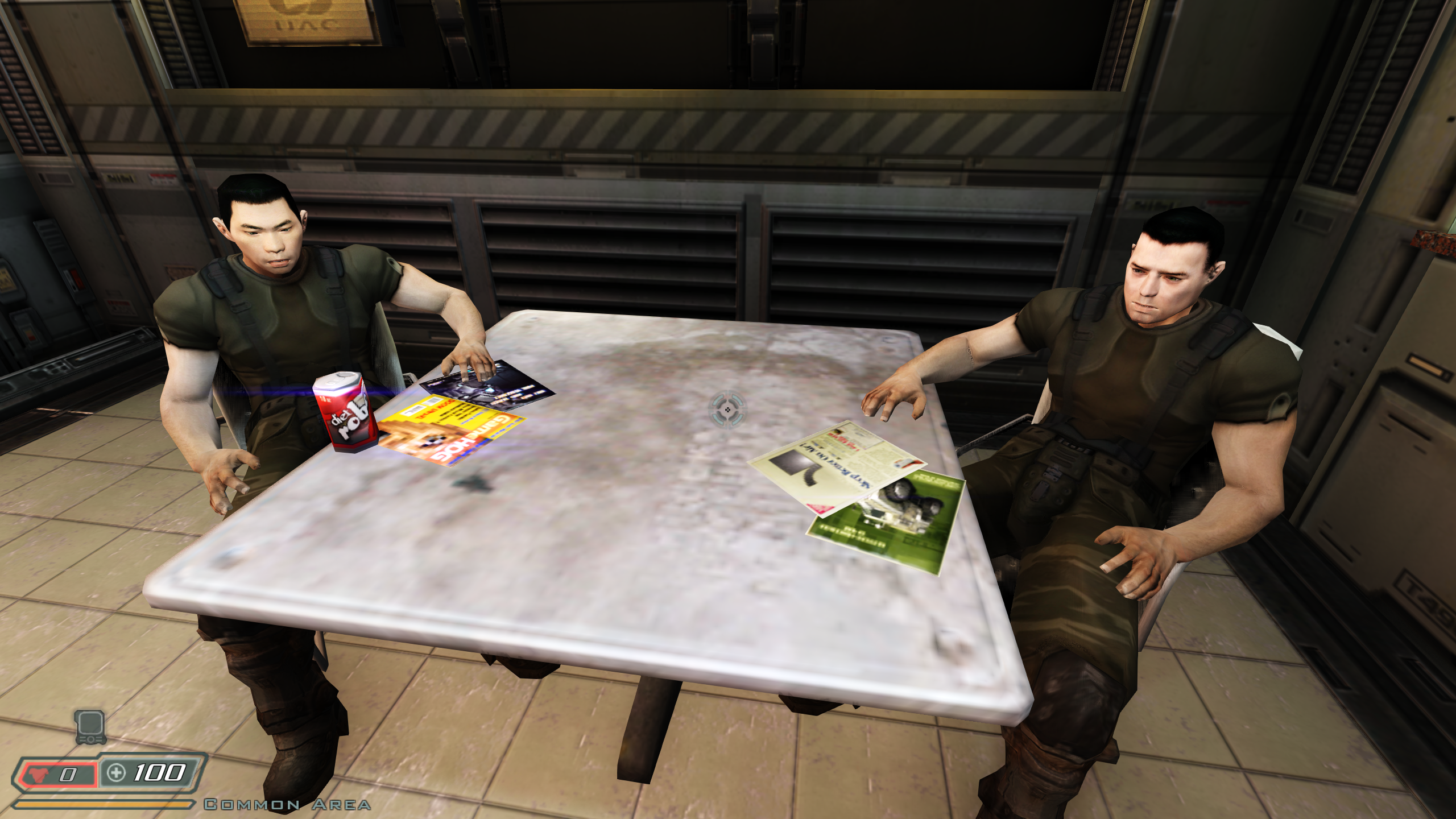 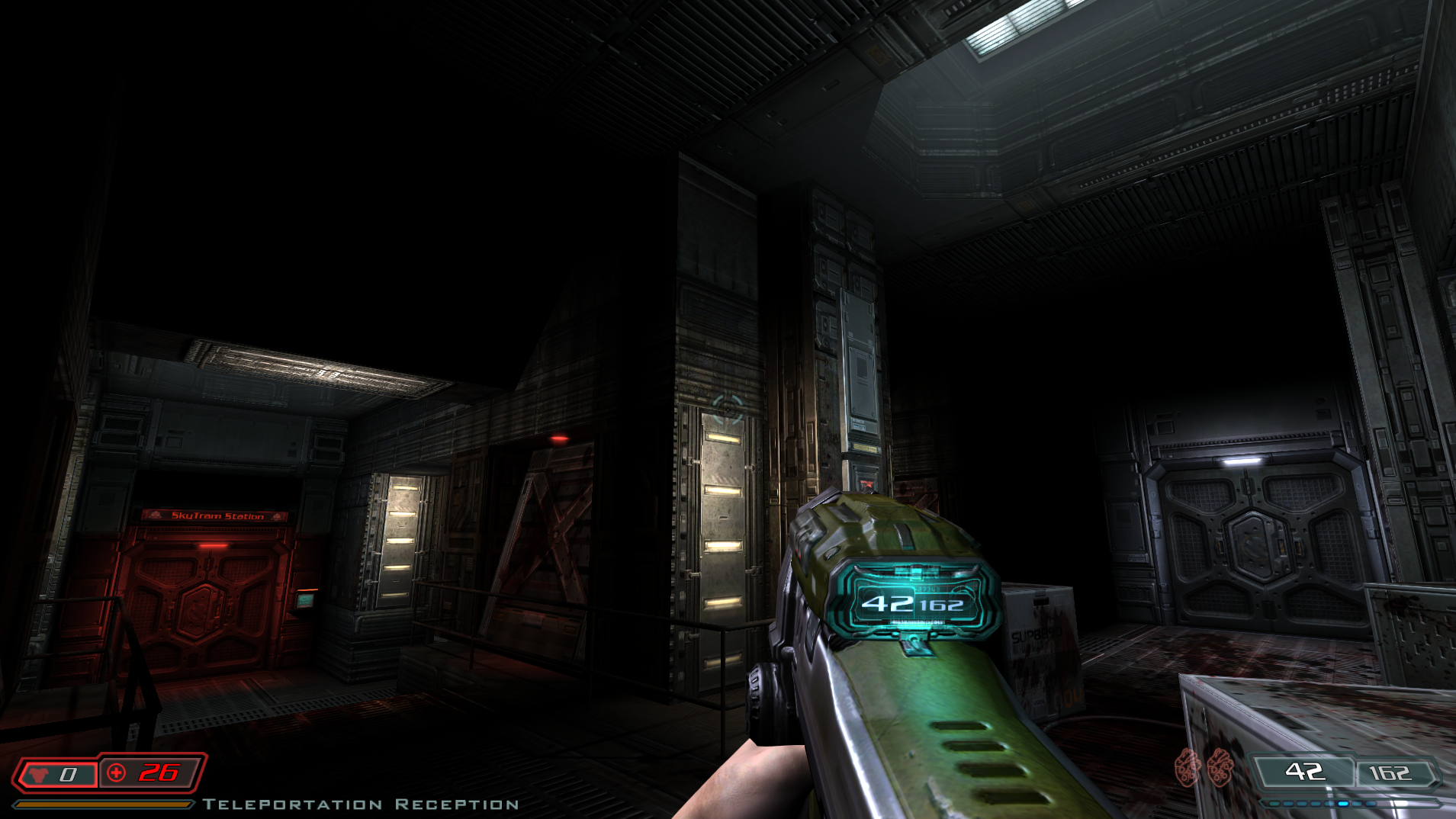 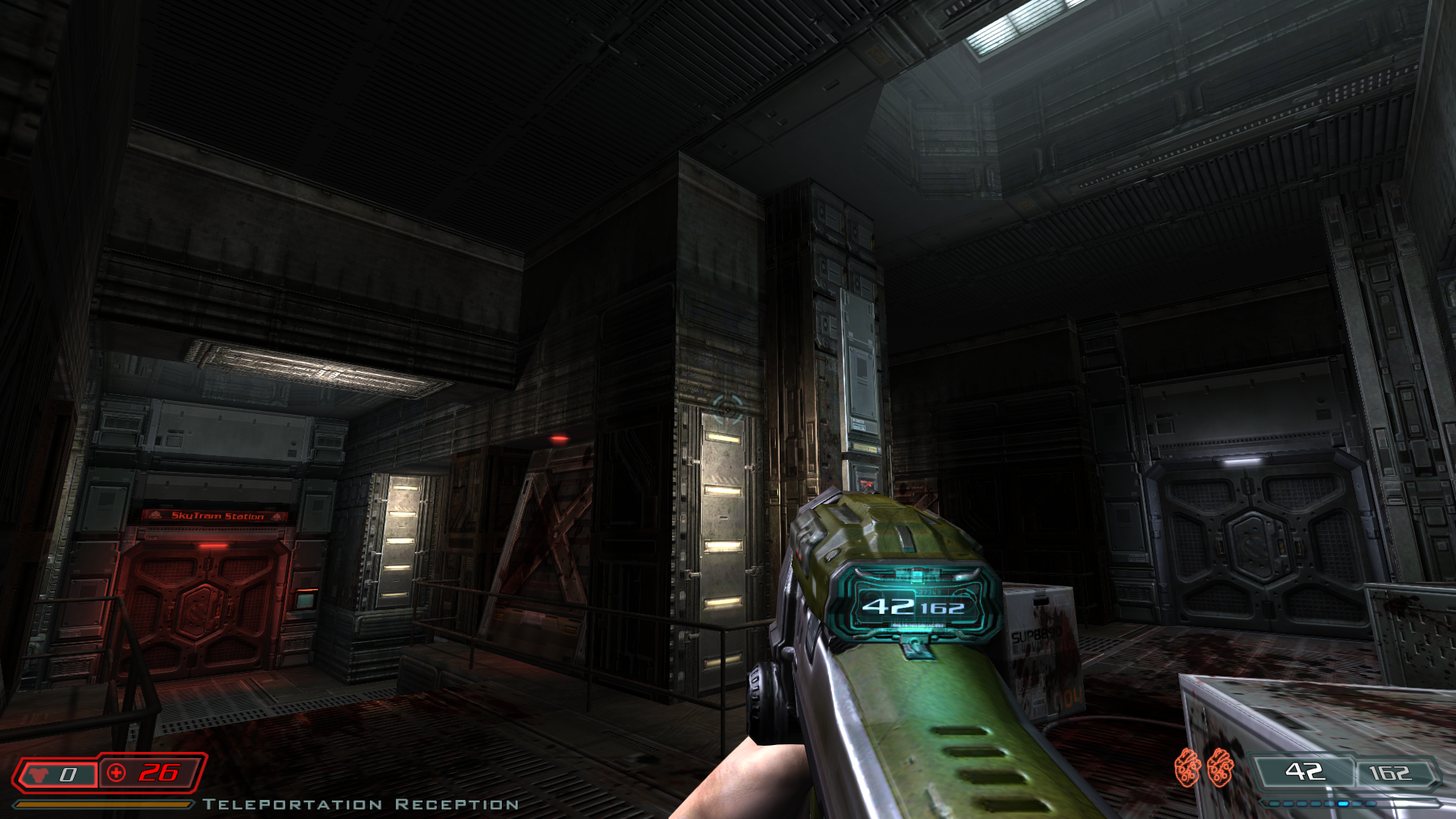 Left: No HDR and no SSAO. Right: r_useSSAO 1 darkens the corners of the scene and also removes too much ambient added by the extra ambient pass 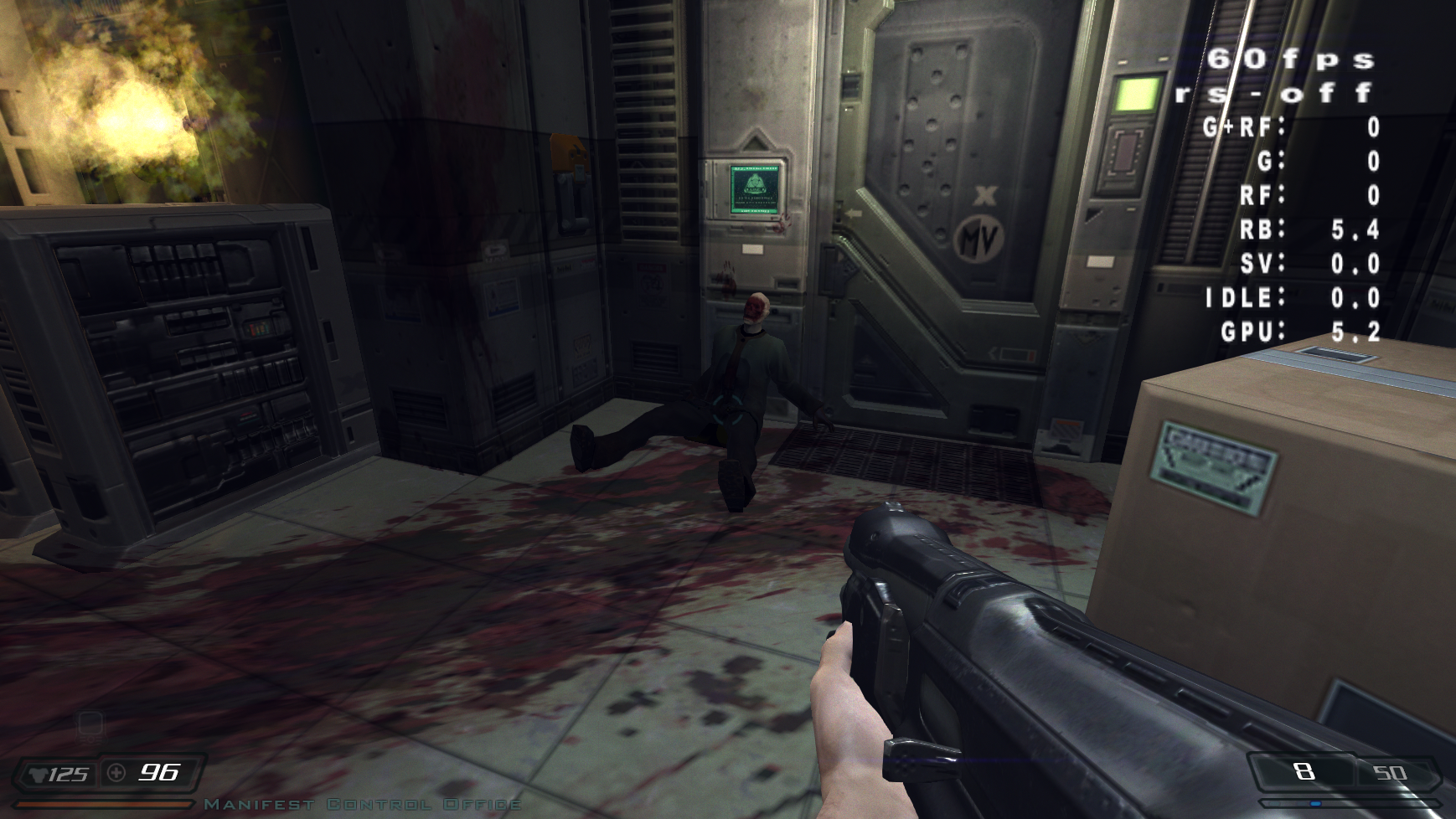 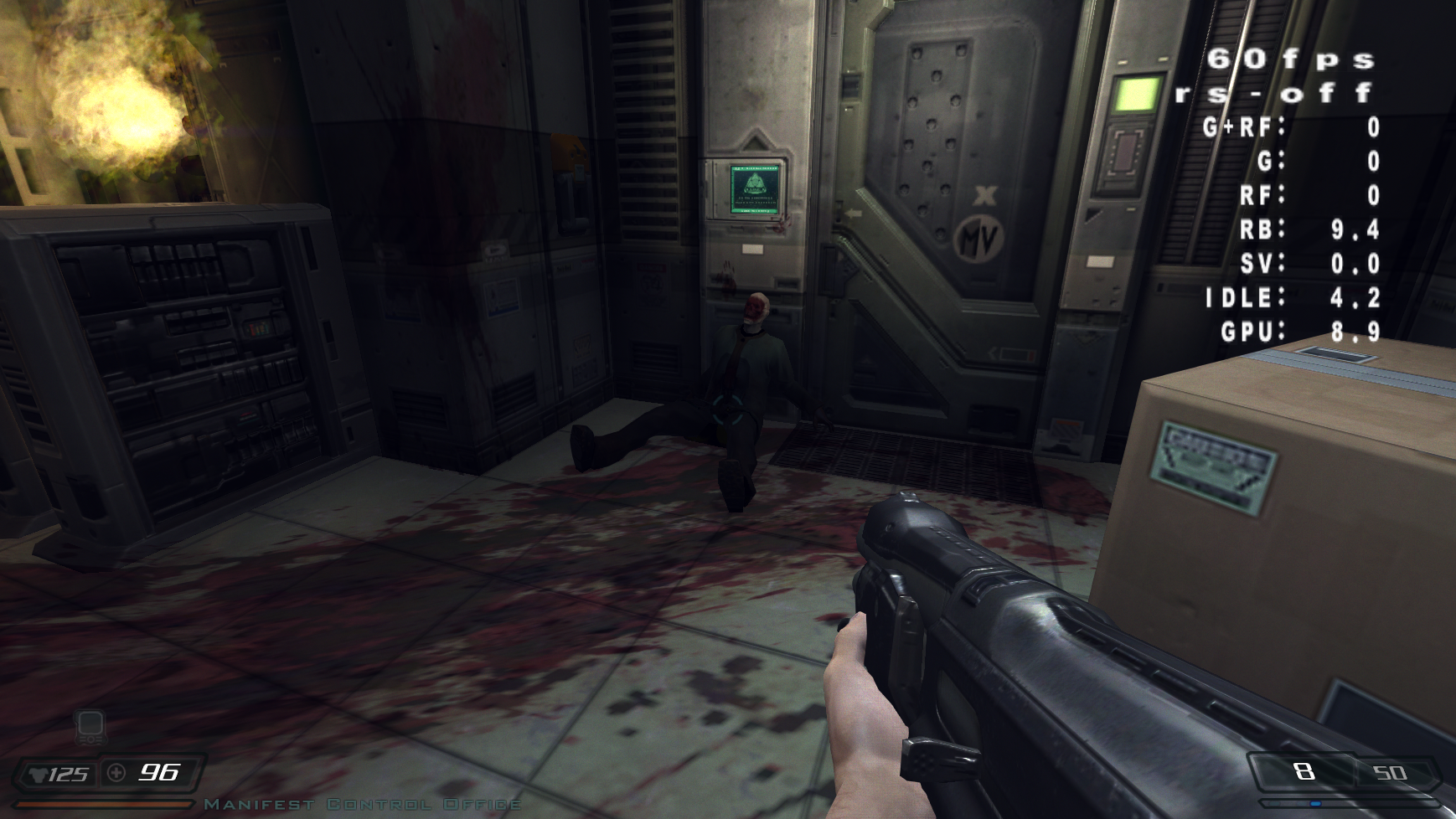 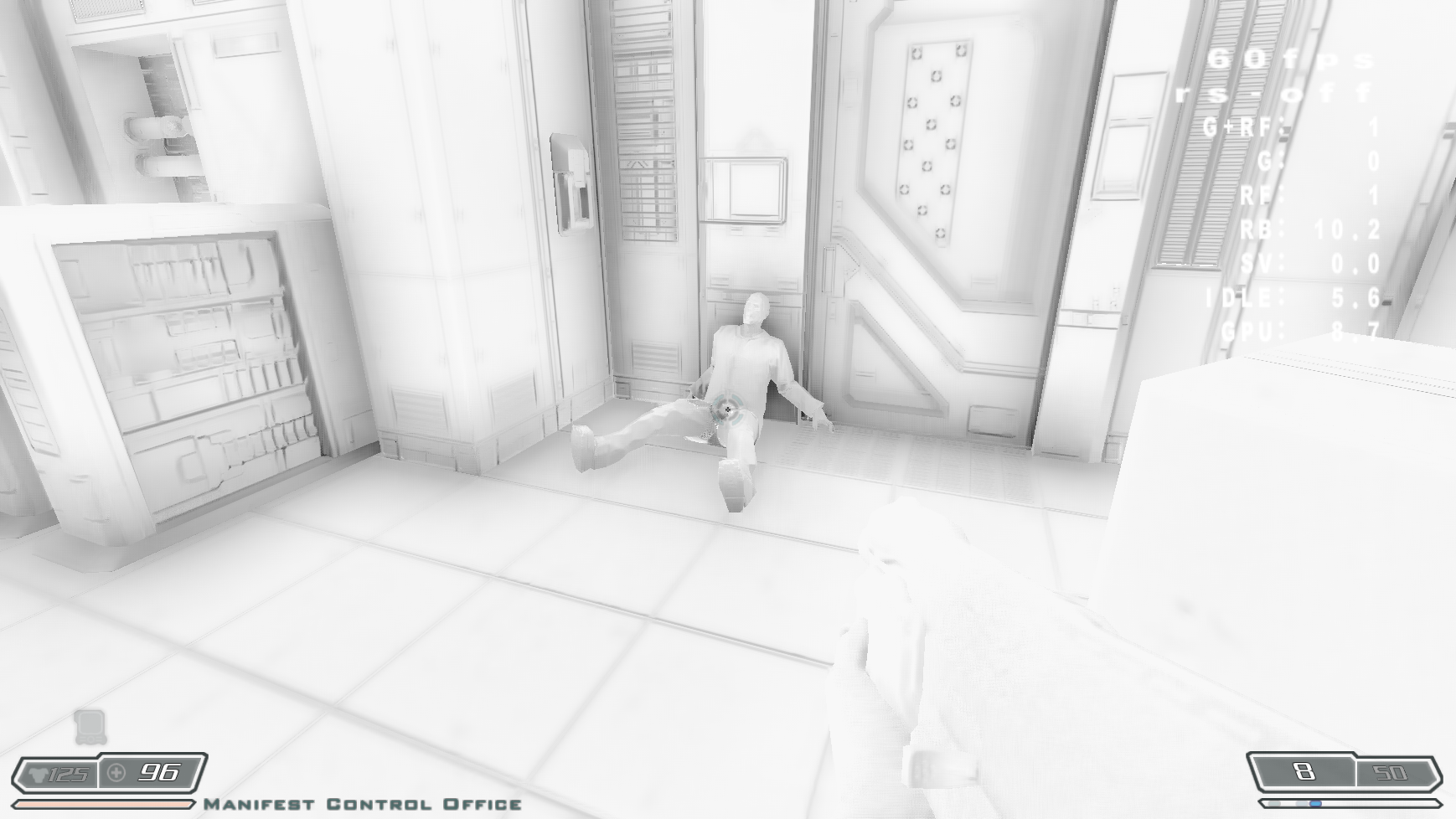 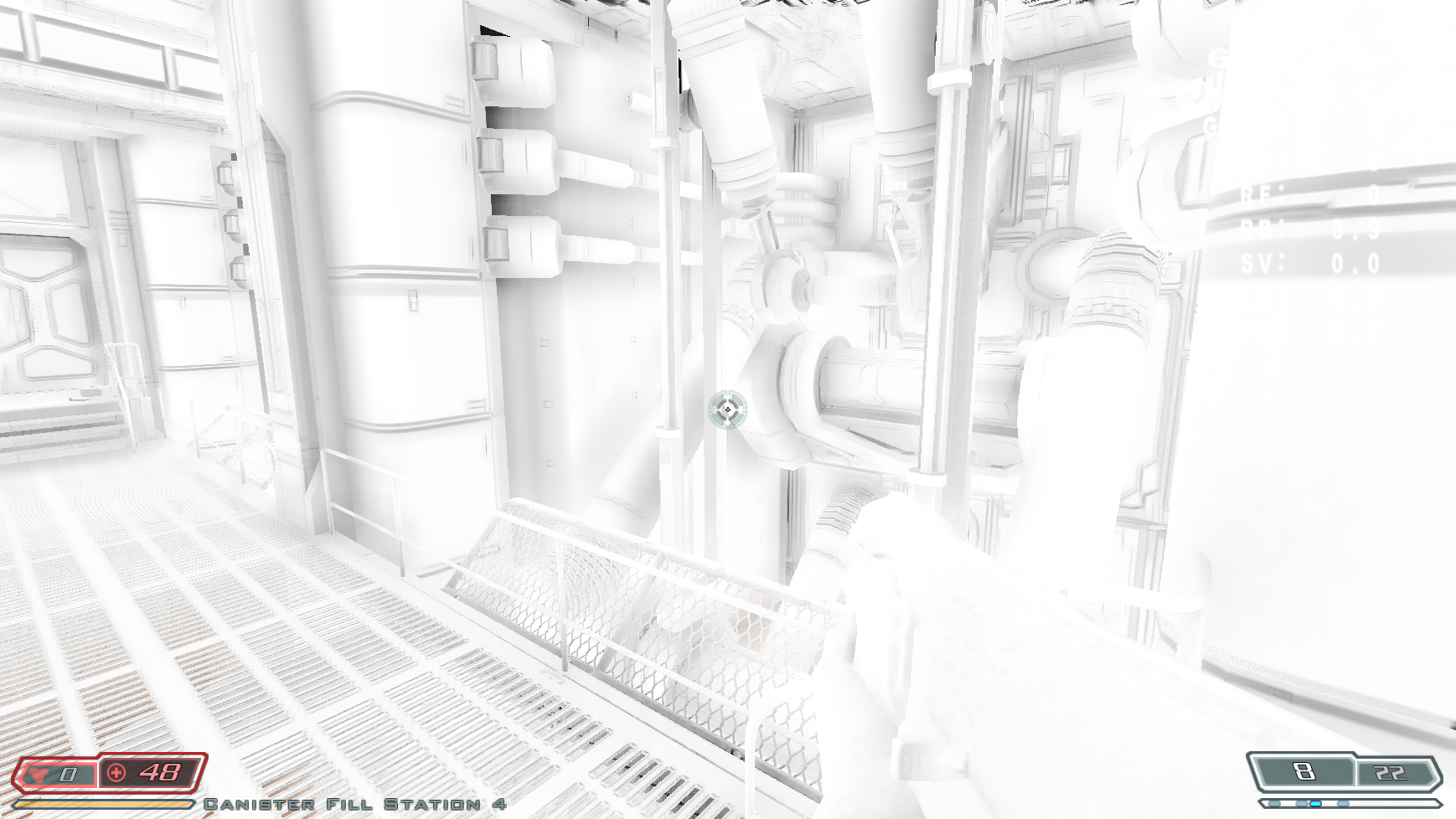 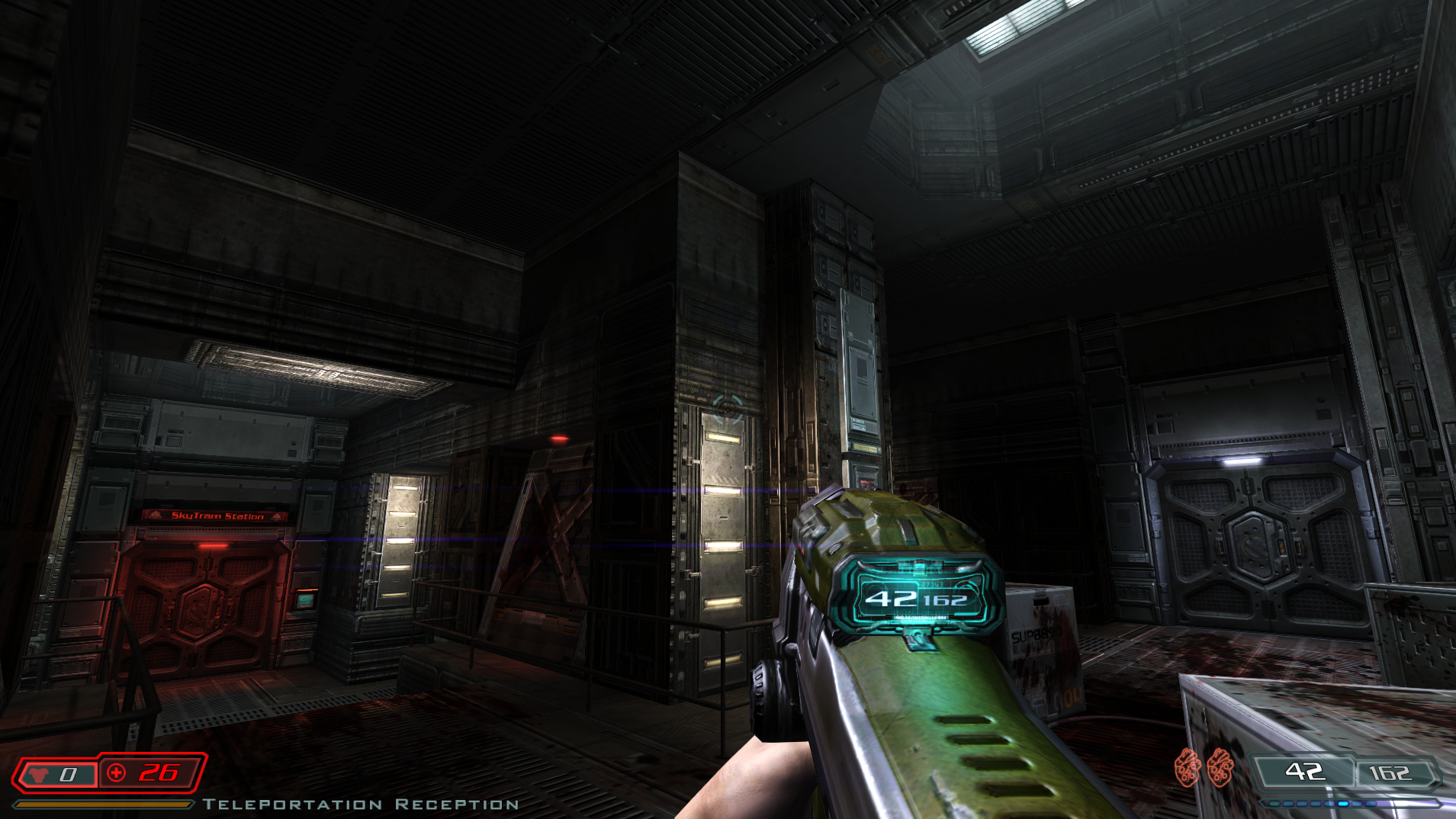 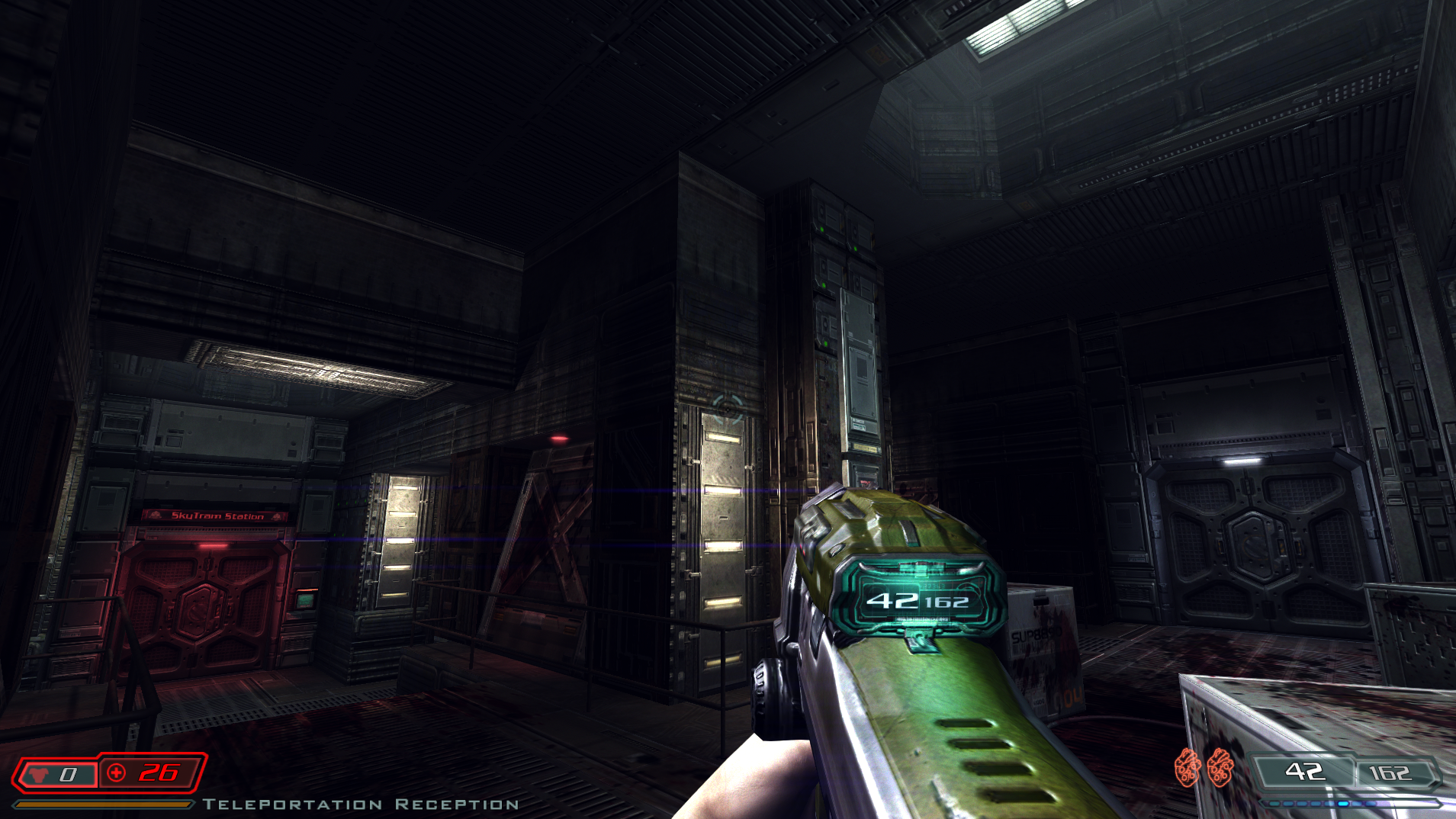 A short summary of the file layout:

This release does not contain any game data, the game data is still covered by the original EULA and must be obeyed as usual.

You must patch the game to the latest version.

Or the game can be purchased from Steam (with DRM): http://store.steampowered.com/app/208200/

The Doom 3 BFG Edition GPL Source Code release does not include functionality for integrating with Steam. This includes roaming profiles, achievements, leaderboards, matchmaking, the overlay, or any other Steam features.

Back End Rendering of Stencil Shadows

This method was patented by Creative Labs and has finally expired on 2019-10-13. (see https://patents.google.com/patent/US6384822B1/en for expiration status)

ADDITIONAL TERMS: The Doom 3 BFG Edition GPL Source Code is also subject to certain additional terms. You should have received a copy of these additional terms immediately following the terms and conditions of the GNU GPL which accompanied the Doom 3 BFG Edition GPL Source Code. If not, please request a copy in writing from id Software at id Software LLC, c/o ZeniMax Media Inc., Suite 120, Rockville, Maryland 20850 USA.

See docs/CODE_LICENSE_EXCEPTIONS.md for all parts of the code The parts that are not covered by the GPL.

Getting the Source Code

This project's GitHub.net Git repository can be checked out through Git with the following instruction set:

The paramter --recursive is only required if you want to build RBDOOM-3-BFG with Vulkan support.

Existing repositories can be updated manually:

Optional if you want to use FFmpeg

If you use the prebuilt Win64 binaries then simply extract them to your C:\Program Files (x86)\Steam\SteamApps\common\Doom 3 BFG Edition\ directory and run RBDoom3BFG.exe.

The following instructions are primarily intented for Linux users and all hackers on other operating systems.

To play the game, you need the game data from a legal copy of the game.

Currently this requires a Windows installer, whether that be the GOG installer or by using Steam for Windows.

Note: the original DVD release of Doom 3 BFG contains encrypted data that is decoded by Steam on install.

(replace <YOUR_STEAM_LOGIN_NAME> with your steam login name) When it's done you should have the normal windows installation of Doom 3 BFG in ./doom3bfg/ and the needed files in ./doom3bfg/base/ That number is the "AppID" of Doom 3 BFG; if you wanna use this to get the data of other games you own, you can look up the AppID at https://steamdb.info/

NOTE that we've previously recommended using download_depot in the Steam console to install the game data. That turned out to be unreliable and result in broken, unusable game data. So use SteamCMD instead, as described above.

Alternatively with the GOG installer, you can use Wine to install the game. See https://winehq.org/download for details on how to install wine for Linux and Mac.

Once Wine is installed and configured on your system install Doom 3 BFG edition using the downloaded installers from gog.com:

(there will be several .exe files from GOG, make sure all of them are in the same directory)

Once this is complete, by default you can find your Doom 3 BFG "base/" directory at ".wine/drive_c/GOG\ Games/DOOM\ 3\ BFG/base".

Note that you may want to add the following line to the bottom of the default.cfg in whatever "base/" directory you use:

This will ensure the game and its menus are in english and don't default to something else. Alternatives include:

The best way for telling about a bug is by submitting a bug report at our GitHub bug tracker page:

If you want to report an issue with the game, you should make sure that your report includes all information useful to characterize and reproduce the bug.

Q: Why bother with DOOM-3-BFG in 2019 / 2020? A: It is fun, period. Doom 3 was an impressive milestone in total game development in 2004. In 2011 id Software added lot stuff from the development of Rage like its own Flash SWF and ActionScript 2 interpreter, proper support for gamepads and widescreens. It also combines the gamecode for D3 and its missionpacks and runs it in a seperate thread and it has many multithreaded rendering optimizations. DOOM-3-BFG is one of the most transparent games available where you can open all files and inspect how the game was built.

Q: Can I use this engine to make a commercial game? A: You can but don't bother me to give you free support and you probably should use Unreal Engine 4. I am a full time game developer and usually don't have time for any free support.

Q: How do I know what code you've changed? A: Apart from the Git diffs, you can look for // RB in the source code. Many other contributors commented their changes in the same way. I enforced the usage of Astyle in this project which also makes it alot easier to compare it against other ports of DOOM-3-BFG. Simply format the other ports with Astyle like I do in neo/astyle-code.bat and you can compare the code easily in WinMerge or KDiff3.