Scan your container images for package vulnerabilities with Aqua Security

MicroScanner is now deprecated in favour of Trivy

Now that you can embed Trivy in a Dockerfile, we recommend using our open source scanner Trivy for vulnerability scanning your container images, as well as filesystems and source code repositories.

Existing MicroScanner tokens continue to work, and we will give notice before retiring the MicroScanner service.

This video explains more about replacing MicroScanner with Trivy. 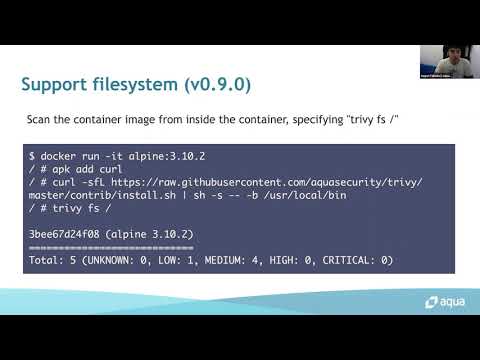 A free-to-use tool that scans container images for package vulnerabilities.

Aqua Security's MicroScanner lets you check your container images for vulnerabilities. If your image has any known high-severity issue, MicroScanner can fail the image build, making it easy to include as a step in your CI/CD pipeline.

Note: This freely-available Community Edition enables scanning by adding some lines to your Dockerfile, incorporating the microscanner binary as part of the image build. This is aimed at individual developers and open source projects who may not have control over the full CI/CD pipeline. The Aqua Security commercial solution scans container images without requiring any modification to the image or its Dockerfile, and is designed to be hooked into your CI/CD pipeline after the image build is complete, and/or to scan images from a public or private container registry.

Another note: This freely-available Community Edition of MicroScanner scans for vulnerabilities in the image's installed packages. Aqua's commercial customers have access to additional Enterprise Edition scanning features, such as scanning files for vulnerabilities, and scanning for sensitive data included in a container image.

Registering for a token

To use MicroScanner you'll first need to register for a token.

Or get a token by registering here https://microscanner.aquasec.com/signup

We'll send you a token to the email address you specify.

This process will prompt you to agree to the Terms and Conditions for MicroScanner.

MicroScanner is designed to be run as part of building a container image. You add the microscanner executable into the image, and a step to run the scan, which will examine the contents of the image filesystem for vulnerabilities. If high severity vulnerabilities are found, this will fail the image build (though you can force the scanner to exit with zero by setting the --continue-on-failure flag).

Adding microscanner to your Dockerfile

The following lines add microscanner to a Dockerfile, and execute it.

You may also need to add ca-certificates to the image if they are not already built into the parent image, or added in your Dockerfile, so that microscanner can make an HTTPS connection. For example (Debian):

When you build the image, missing CA certificates will result in an error like this:

Pass the token obtained on registration in at build time.

The output includes JSON output describing any vulnerabilities found in your image.

Specifying the --continue-on-failure flag allows you to continue the build even if high severity issues are found.

Specifying the --no-verify flag allows you to continue the build even if CA certificates are not installed.

The following line installs, runs, and cleans up microscanner in one layer so that it doesn't add to the size of the final image.

(If you need the ca-certificates in the image for other purposes, you may want to leave that as a separate step in the Dockerfile.)

microscanner-wrapper makes it easy to use MicroScanner to scan existing images.

It works by creating a new temporary Dockerfile dedicated to vulnerability scanning which starts FROM the image to be scanned, and adds and runs microscanner. This is used to build a temporary image which can then be discarded. Based on the output you can make decisions on whether to deploy the image.

This approach also has the advantage that the microscanner executable doesn't need to be built into the image you eventually deploy.

Your token will be rate-limited to a reasonable number of scans. If you hit rate-limiting issues please do get in touch to discuss your use-case.

MicroScanner is now deprecated. If you have any issues replacing MicroScanner with Trivy, please raise those as issues on the Trivy repository.

Scan your container images for package vulnerabilities with Aqua Security