If you require support or wish to ensure the continuation of this library, you must get your company to respond to the Call For Funding. I do not have the inclination to provide gratis assistance.

netlib-java is a wrapper for low-level BLAS, LAPACK and ARPACK that performs as fast as the C / Fortran interfaces with a pure JVM fallback. netlib-java is included with recent versions of Apache Spark.

For more details on high performance linear algebra on the JVM, please watch my talk at Scala eXchange 2014 (follow along with high-res slides).

If you're a developer looking for an easy-to-use linear algebra library on the JVM, we strongly recommend Commons-Math, MTJ and Breeze:

The JNILoader will attempt to load the implementations in this order automatically.

High performance BLAS / LAPACK are available commercially and open source for specific CPU chipsets. It is worth noting that "optimised" here means a lot more than simply changing the compiler optimisation flags: specialist assembly instructions are combined with compile time profiling and the selection of array alignments for the kernel and CPU combination.

An alternative to optimised libraries is to use the GPU: e.g. cuBLAS or clBLAS. Setting up cuBLAS must be done via our NVBLAS instructions, since cuBLAS does not implement the actual BLAS API out of the box.

Be aware that GPU implementations have severe performance degradation for small arrays. MultiBLAS is an initiative to work around the limitation of GPU BLAS implementations by selecting the optimal implementation at runtime, based on the array size.

If it is not possible to provide a shared library, the author may be available to assist with custom builds (and further improvements to netlib-java) on a commercial basis. Make contact for availability (budget estimates are appreciated).

Apple OS X requires no further setup because OS X ships with the veclib framework, boasting incredible CPU performance that is difficult to surpass (performance charts below show that it out-performs ATLAS and is on par with the Intel MKL).

Generically-tuned ATLAS and OpenBLAS are available with most distributions (e.g. Debian) and must be enabled explicitly using the package-manager. e.g. for Debian / Ubuntu one would type

However, these are only generic pre-tuned builds. To get optimal performance for a specific machine, it is best to compile locally by grabbing the latest ATLAS or the latest OpenBLAS and following the compilation instructions (don't forget to turn off CPU throttling and power management during the build!). Install the shared libraries into a folder that is seen by the runtime linker (e.g. add your install folder to /etc/ld.so.conf then run ldconfig) ensuring that libblas.so.3 and liblapack.so.3 exist and point to your optimal builds.

If you have an Intel MKL licence, you could also create symbolic links from libblas.so.3 and liblapack.so.3 to libmkl_rt.so or use Debian's alternatives system:

and don't forget to add the MKL libraries to your /etc/ld.so.conf file (and run sudo ldconfig), e.g. add

NOTE: Some distributions, such as Ubuntu precise do not create the necessary symbolic links /usr/lib/libblas.so.3 and /usr/lib/liblapack.so.3 for the system-installed implementations, so they must be created manually.

The native_system builds expect to find libblas3.dll and liblapack3.dll on the %PATH% (or current working directory). Besides vendor-supplied implementations, OpenBLAS provide generically tuned binaries, and it is possible to build ATLAS.

Use Dependency Walker to help resolve any problems such as: UnsatisfiedLinkError (Can't find dependent libraries).

NOTE: OpenBLAS doesn't provide separate libraries so you will have to customise the build or copy the binary into both libblas3.dll and liblapack3.dll whilst also obtaining a copy of libgfortran-1-3.dll, libquadmath-0.dll and libgcc_s_seh-1.dll from MinGW.

A specific (non-standard) JNI binary may be forced like so:

(note that this is not your libblas.so.3 or liblapack.so.3, it is the netlib-java native wrapper component which automatically detects and loads your system's libraries).

To turn off natives altogether, add these to the JVM flags:

The following performance charts give an idea of the performance ratios of Java vs the native implementations. Also shown are pure C performance runs that show that dropping to C at the application layer gives no performance benefit. If anything, the Java version is faster for smaller matrices and is consistently faster than the "optimised" implementations for some types of operations (e.g. ddot).

One can expect machine-optimised natives to out-perform the reference implementation – especially for larger arrays – as demonstrated below by Apple's veclib framework, Intel's MKL and (to a lesser extent) ATLAS.

Of particular note is the cuBLAS (NVIDIA's graphics card) which performs as well as ATLAS on DGEMM for arrays of ~20,000+ elements (but as badly as the Raspberry Pi for smaller arrays!) and not so good for DDOT.

Included in the CUDA performance results is the time taken to setup the CUDA interface and copy the matrix elements to the GPU device. The nooh run is a version that does not include the overhead of transferring arrays to/from the GPU device: to take full advantage of the GPU requires developers to re-write their applications with GPU devices in mind. e.g. re-written implementation of LAPACK that took advantage of the GPU BLAS would give a much better performance improvement than dipping in-and-out of GPU address space. 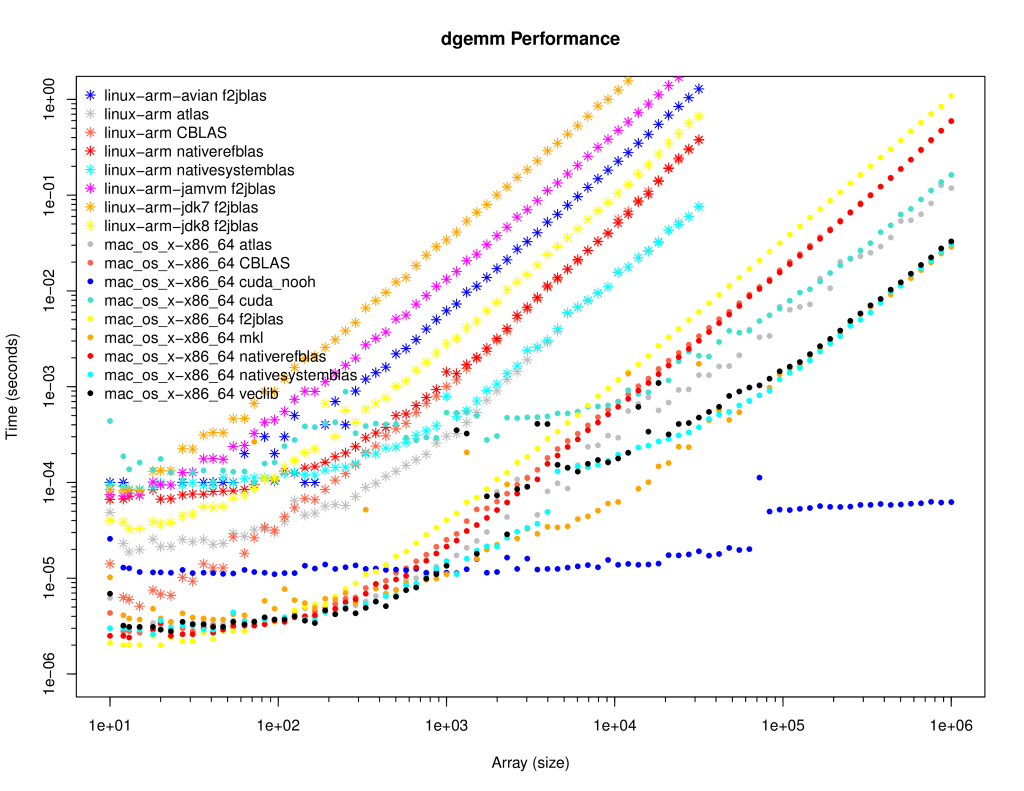 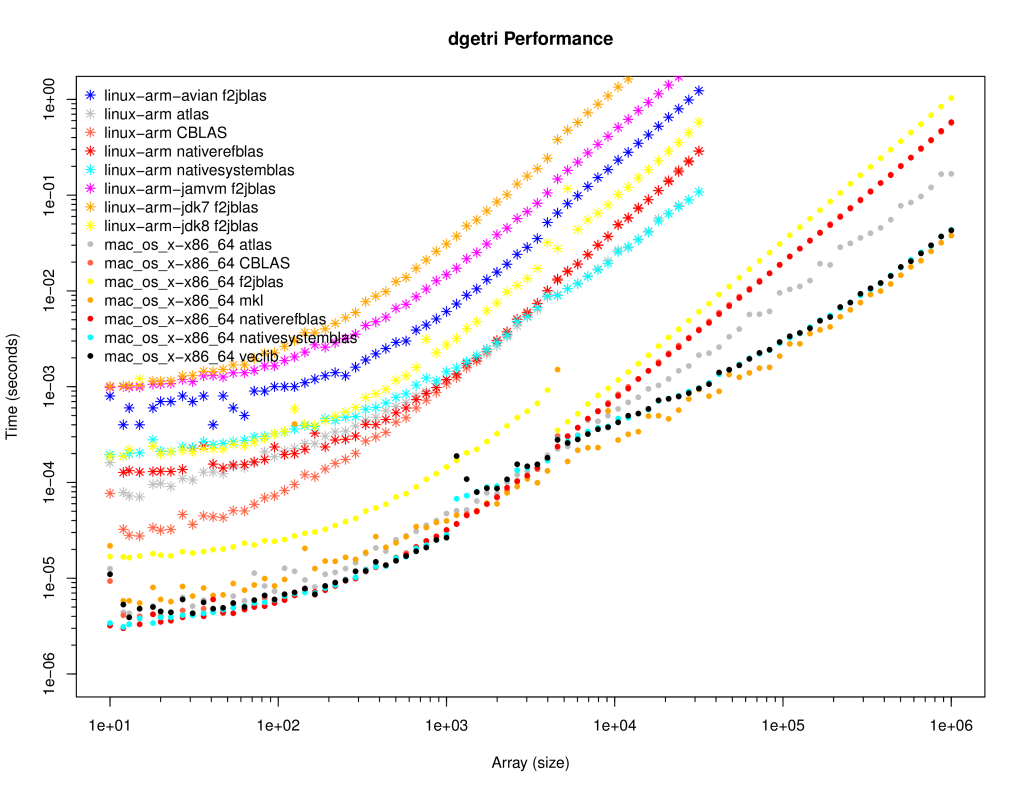 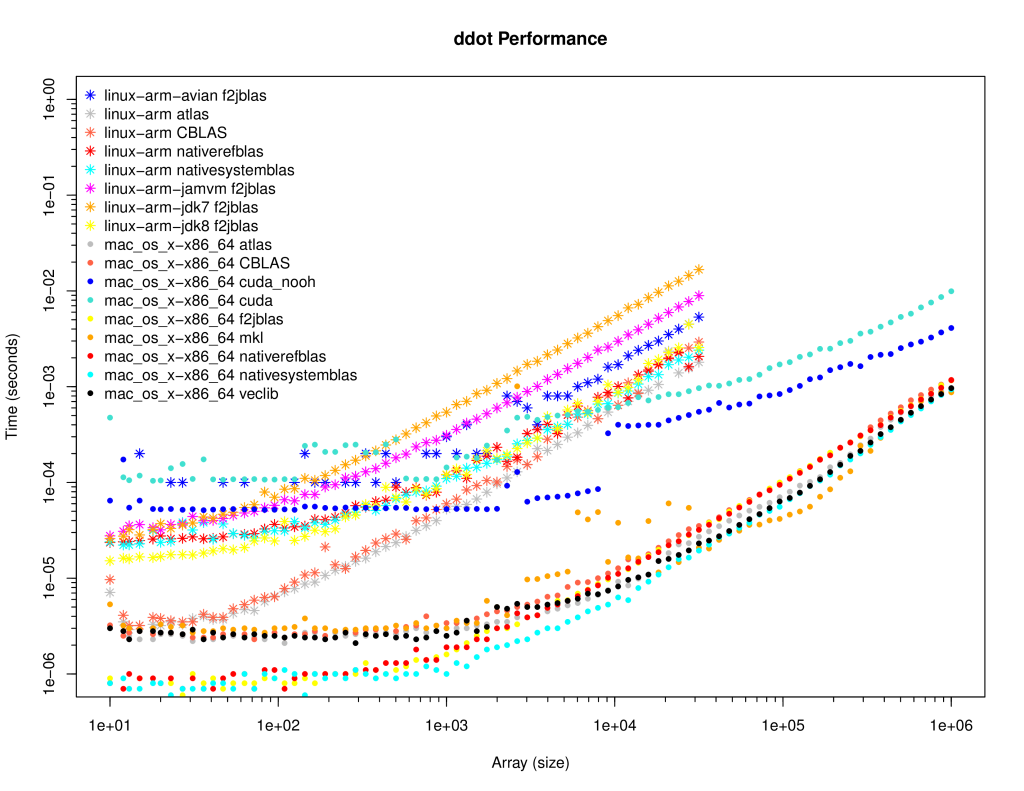 The DSAUPD benchmark measures the calculation of 10% of the eigenvalues for sparse matrices (N rows by N colums). Not included in this benchmark is the time taken to perform the matrix multiplication at each iteration (typically N iterations). 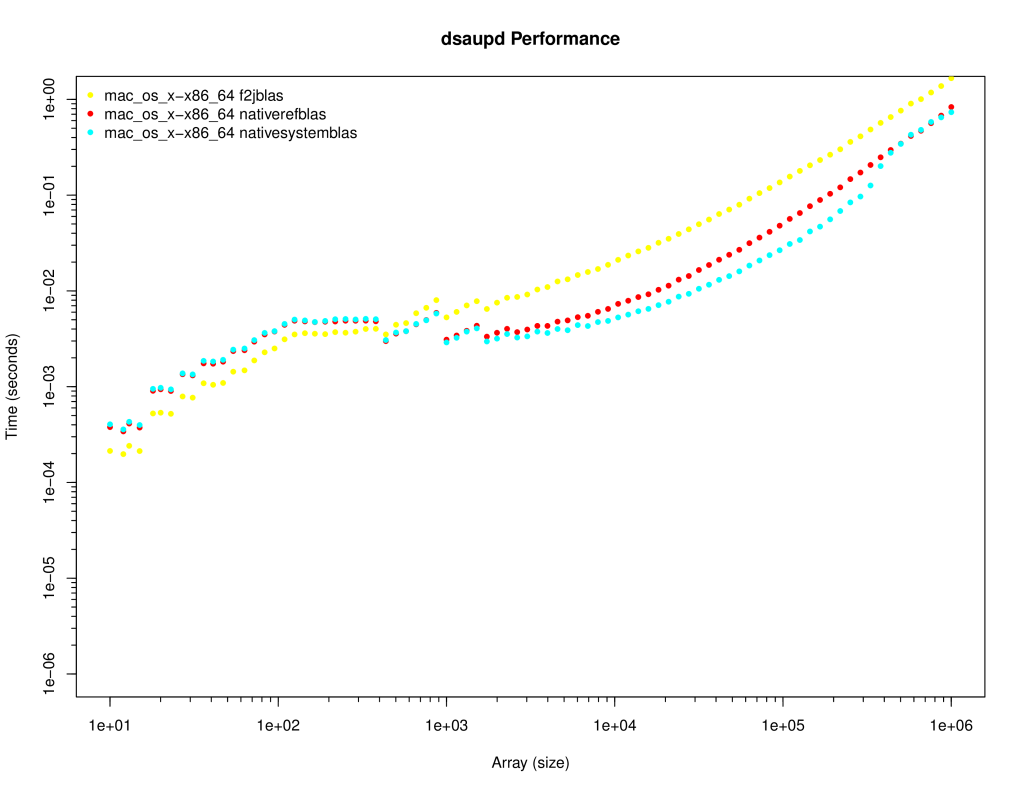 NOTE: larger arrays were called first so the JIT has already kicked in for F2J implementations: on a cold startup the F2J implementations are about 10 times slower and get to peak performance after about 20 calls of a function (Raspberry Pi doesn't seem to have a JIT).

Don't download the zip file unless you know what you're doing: use maven or ivy to manage your dependencies as described below.

Releases are distributed on Maven central:

SBT developers can use

Those wanting to preserve the pre-1.0 API can use the legacy package (but note that it will be removed in the next release):

and developers who feel the native libs are too much bandwidth can depend on a subset of implementations: simply look in the all module's pom.xml.

If the above fails, ensure you have the following in your pom.xml: