Rectangle is a window management app based on Spectacle, written in Swift. 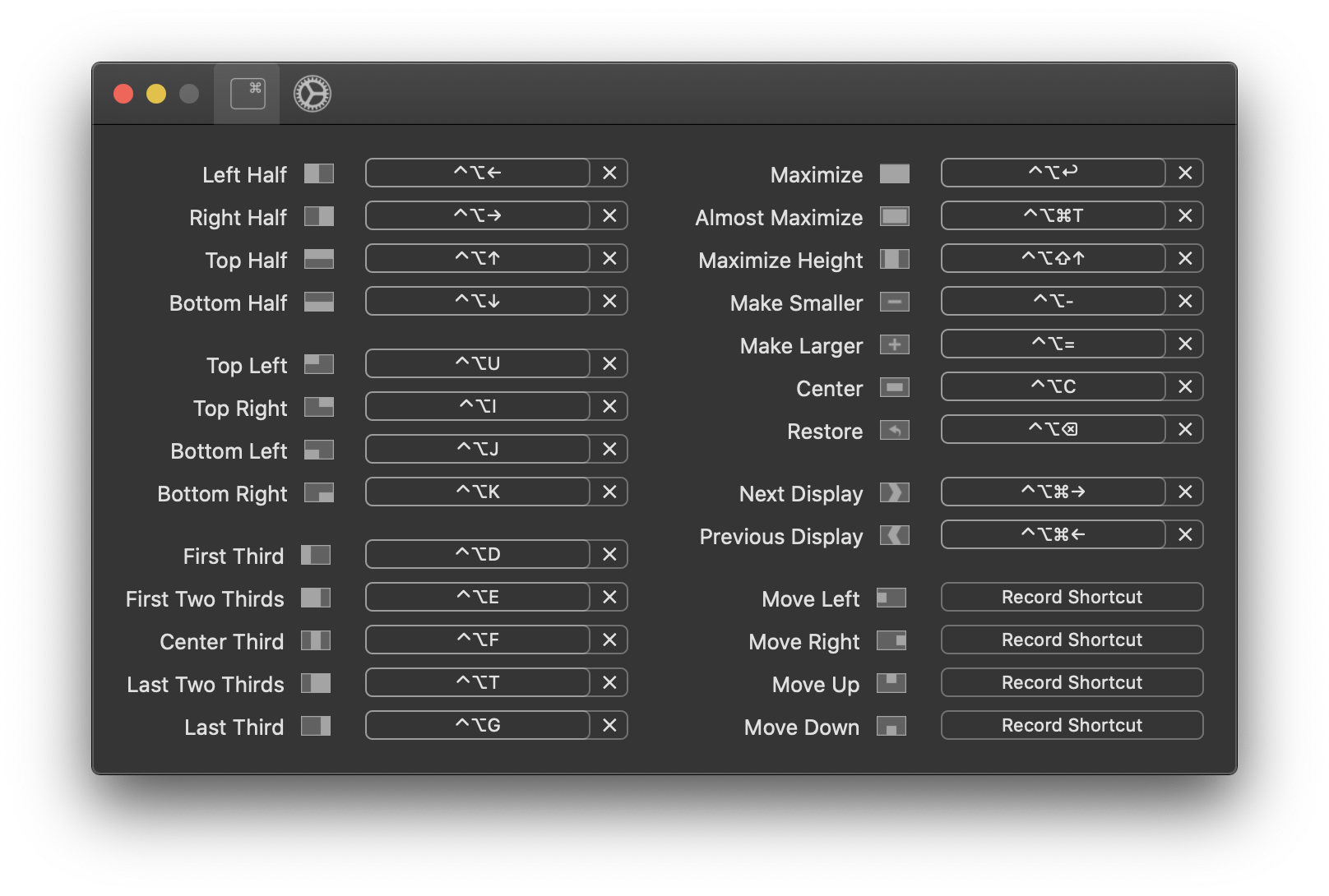 Rectangle supports macOS v10.11+. If you're willing to test on earlier versions of macOS, this can be updated.

You can download the latest dmg from https://rectangleapp.com or the Releases page.

Or install with brew cask:

The keyboard shortcuts are self explanatory, but the snap areas can use some explanation if you've never used them on Windows or other window management apps.

The preferences window is purposefully slim, but there's a lot that can be modified via Terminal. After executing a terminal command, restart the app as these values are loaded on application startup.

If you wish to change the default shortcuts after first launch, use the following command. True is for the recommended shortcuts, false is for Spectacle's.

Halves to thirds (repeated execution of half and quarter actions)

Halves to thirds is controlled by the "Cycle displays" setting in the preferences. If the cycle displays setting is not checked, then each time you execute a half or quarter action, the width of the window will cycle through the following sizes: 1/2 -> 2/3 -> 1/3.

The cycling behavior can be disabled entirely with:

By default, "Almost Maximize" will resize the window to 90% of the screen (width & height).

By default, the directional move will center the window along the edge that the window is being moved to.

By default, "Make Smaller" will decrease the window until it reaches 25% of the screen (width & height).

By default, "Make Smaller" and "Make Larger" change the window height/width by 30 pixels.

By default, windows touching the edge of the screen will keep those shared edges the same while only resizing the non-shared edge. With window gaps, this is a little ambiguous since the edges don't actually touch the screen, so you can disable it for traditional, floating resizing:

Changing the margin for the snap areas

Each margin is configured separately, and has a default value of 5

Each drag to snap area on the edge of a screen can be ignored with a single Terminal command, but it's a bit field setting so you'll have to determine the bit field for which ones you want to disable.

Rectangle doesn't have the ability to move to other desktops/spaces.

Apple never released a public API for Spaces, so any direct interaction with Spaces uses private APIs that are actually a bit shaky. Using the private API adds enough complexity to the app to where I feel it's better off without it. If Apple decides to release a public API for it, I'll add it in.

Window moving/resizing appears animated/smooth instead of quick, and windows don't end up where you expect

This is a macOS bug. Here's some things that trigger it:

You can try enabling "Reduce motion" in the "Display" section of the "Accessibility" System Preferences. This doesn't appear to work with the on-screen keyboard, but might work for other triggers of the issue. Note that this setting will replace the Spaces/Mission Control/Exposé animations with fades.

As a last resort, you can use this workaround release of Rectangle: v0.25.1, but it's just a better experience to avoid the items that trigger it and use the latest version of Rectangle. The ideal scenario is that Apple gets around to fixing it. This scenario will only happen if a lot of people file the issue.

If you are a developer, file an issue here: https://feedbackassistant.apple.com/

If you are not a developer, use: https://www.apple.com/feedback/macos.html

Window resizing is off slightly for iTerm2

By default iTerm2 will only resize in increments of character widths. There might be a setting inside iTerm2 to disable this, but you can change it with the following command.

If windows aren't resizing or moving as you expect, here's some initial steps to get to the bottom of it. Most issues of this type have been caused by other apps.

The configuration for Rectangle is stored using NSUserDefaults, meaning it is stored in the following location: ~/Library/Preferences/com.knollsoft.Rectangle.plist

That file can be backed up or transferred to other machines.

Logic from Rectangle is used in the Multitouch app. The Hookshot app is entirely built on top of Rectangle. If you contribute significant code or localizations that get merged into Rectangle, you get free licenses of Multitouch and Hookshot. Contributors to Sparkle, MASShortcut, or Spectacle can also receive free Multitouch or Hookshot licenses (just send me a direct message on Gitter).

Initial localizations were done using DeepL and Google Translate, but many of them have been updated by contributors. Translations that weren't done by humans can definitely be improved. If you would like to contribute to localization, all of the translations are held in the Main.strings per language. If you would like to add a localization but one doesn't currently exist and you don't know how to create one, create an issue and a translation file can be initialized.

Running the app in Xcode (for developers)