Take control of what is going to be your next release.

Take control of what is going to be your next release.
https://community.algolia.com/shipjs/

Running the following command will guide you to set it up interactively.

This interactive CLI will help you install Ship.js into your package and create a tailored config file for your project. Coding is fun, debugging and testing are okay, but releasing is NOT.

When releasing, you go through something like the following:

What could go wrong?

How to solve them

In Ship.js, the release process consists of three parts.

Run shipjs prepare and it will briefly do the following:

It takes less than a couple of minutes.

When you think it's ready to release, merge the PR.

Run shipjs trigger and it will briefly do the following:

You can manually run shipjs trigger on the base branch after the PR is merged.

However you can also configure your CI service(e.g. CircleCI) to do this for you. It means the longest process is on the CI service asynchronously, not occupying your working environment.

Let's move on to the guide.

Or, you can watch this video if you prefer. 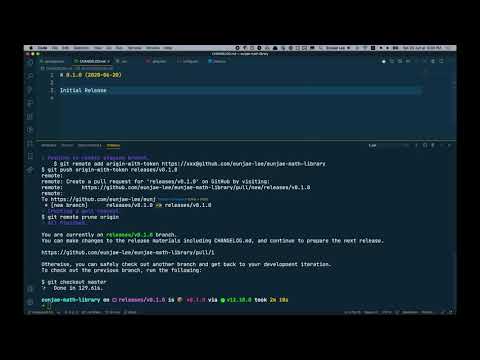 How is it different from semantic-release?

semantic-release is a tool for fully automated version management and package publishing.

Ship.js gives you more control over the release process. Ship.js automatically creates a PR before publishing every release, so that you can:

Thanks goes to these wonderful people (emoji key):

Show the world you're using Ship.js

Take control of what is going to be your next release.